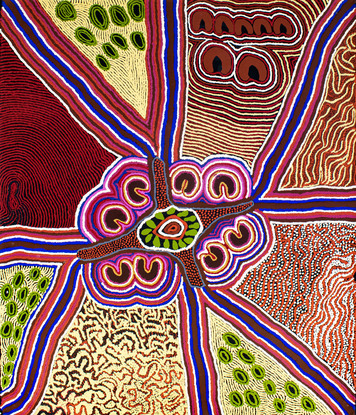 'Kungkarrangkalpa' (The Seven Sisters or Pleaides) is significant Tjukurrpa (dreamtime). Its origins you may be familiar with in astronomy and its connection to 'Wati Nyiru' (Magic Man or Orion). The roots of this dreaming stems across indigenous groups around the world. The Australian Aboriginal songline is one part to the whole dreaming which can be traced all around the world. The ladies of the Ngaanyatjarra Lands depict their significant chapter and understanding of the journey of the sisters. The different versions of this story depend on where you live and the significance's of local Tjukurrpa places.

Nyiru fell in love with the sisters but he was of the wrong skin group to marry, but he still pursued them on their journey. The sisters travel across the land to escape Nyiru’s unwanted attentions, but he is persistent and always finds them. There are significant land forms which can be sited today that evidence this dreaming. As Nyiru is chasing the sisters he tries to catch them by using magic to turn into the most tempting kampurarrpa (bush tomato) and the most beautiful Yirli (wild fig tree), for them to eat and camp under. However, the sisters are knowledgeable of his magic and too clever for Nyiru who they outwit again and again. They go hungry and run through the night rather than be caught by him. As the journey continues, Nyiru gets so frustrated at the wit of the sisters that he uses his magic to make the oldest sister sick to try and get closer to her. The other sisters rescue the big sister and nurse her back to health. It is said he also captures the youngest sister, but with the help of the oldest sister, she escapes back to her sisters who are waiting for her. Eventually, the sisters fly into the sky to escape Nyiru, forming the constellation. Nyiru felt lonely, longing for the sisters who were so far away. Nyiru used his magic to go to the sky, forever in pursuit.

This painting maps the site of 'Kuru Ala' (two-eyes), a sacred place for women in Angilyiya's mother's country south of Papulankutja (Blackstone). Wati Nyiru was following them, disguising himself as a Quandong tree, a Yirli (wild fig tree), and then a carpet snake, spying on them as they made camp and dug for food.

"This is the story about my Grandmother’s country, south of Papulankutja. You can see today the circles at the site in the cave from that Dreamtime story. It’s the young girls turning into young women. The bigger circles are those already women. They have been travelling for food and they saw that man had already taken the big sister. So they are taking her to the second cave for resting and getting better. You can see that man sitting; the rock hole down the bottom "Kuru Ala", they drank that water in the early days. We still drink this water today".