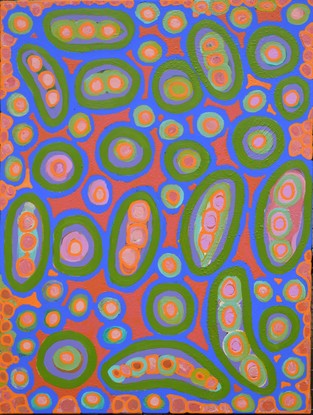 This is a popular Tjukurpa Story (Dreamtime Story) about the constellations of Pleiades and Orion that is common to most Indigenous Australian groups. The different versions of this story depend on where you live and the significance's of local Dreaming places.
The sisters are said to be Pleiades and the other star Orion is Nyiru or Nyirunya (described as a lusty or bad man). Nyiru is forever chasing the sisters known as the Kungkarrangkalpa women as he wants sex and to marry the eldest sister. The seven sisters travel across the land to escape Nyiru’s unwanted attentions, but he is persistent and always finds them. Eventually sisters fly into the sky to escape Nyiru forming the constellation.
As Nyiru is chasing the sisters he tries to catch them by using magic to turn into the most tempting kampurarrpa (bush tomato) and the most beautiful Yirli (wild fig tree), for them to eat and camp under. However, the sisters are knowledgeable of his magic and too clever for Nyiru who they outwit again and again. They go hungry and run through the night rather than be caught by Nyiru.
Every now and again one of the sisters, usually the big sister is caught and raped by Nyiru. It is said he also captures the youngest sister, but with the help of the oldest sister, she escapes back to her sisters who are waiting for her.
In this painting Sonia has painted Nyiru with his spear and kali moving from place to place looking down over the cliff at Kurrualya - a scared place for Women's business (coming of age ceremonies).
Papulankutja or Blackstone Community was established after Ngaanyatjarra people walked out of Warburton mission in the 1970s and returned to their land in the shadow of the spectacular Blackstone Range west of the tri-state border.
Papulankutja Artists was established in 2001 and incorporated in 2004 growing out of Blackstone’s women’s centre. After many years of working through the women’s centre and then the community hall, Papulankutja Artists opened their own purpose built art studio in 2009. Papulankutja Artists are very community focussed. Today, women and men, young people and old people, work together. By purchasing an art work from an Indigenous owned and governed art centre you are supporting the community.

This artwork is currently in 5 other carts 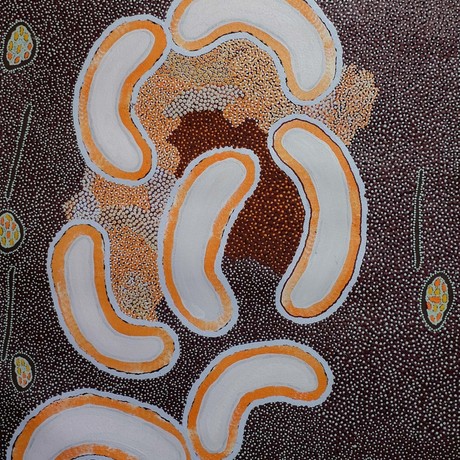