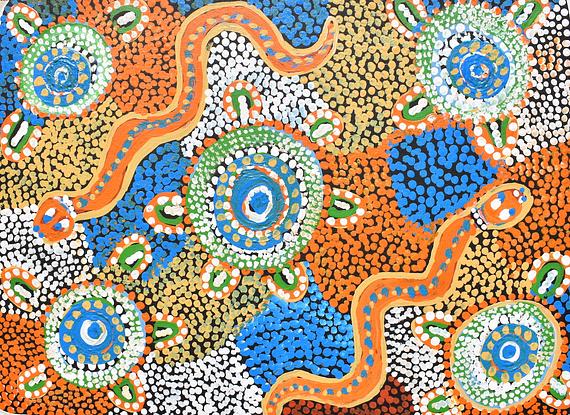 ‘Python Woman and Deadly Snake Man fought a battle. This is Creation Law at Uluru.'

Kuniya is the Woma Python snake and one of the important Creation Ancestors for Uluru. In the Tjukurpa, the beginning of time, the Kuniya people lived at the Rock and as with all Ancestral Beings have shaped its features with their activities. No visitor leaves Uluru without witnessing the scars on its surface etched in battle between the Kuniya and the Liru, Poisonous Snake People.

Minyma Kuniya, a Senior Python Woman, travelled from the South East to bring her eggs back to Uluru where she placed them carefully in a burrow at the Eastern end of the Rock. It was there that she rushed around to the other side to face the Liru Men who had attacked her nephew while she'd been gone. Near Mutitjulu Waterhole she met one of the Liru warriors and, mustering her powers, struck him dead with her digging stick. There on the cliff face is the evidence of her actions in the form of two giant cracks.

Anangu feel strongly about continuing to teach and learn Tjukurpa, Creation Law. Their art is important and vital work. It sustains them economically, physically and culturally, keeping stories and traditions alive.