Normally kicking off in May, Australia’s ever-popular Archibald Prize 2020 was among the many cultural events postponed due to the COVID-19 pandemic. At a time when art is “needed more than ever,” we couldn’t be happier to see the award’s annual return. The Archibald Prize 2020 will be awarded to a portrait ‘preferentially of some man or woman distinguished in art, letters, science or politics, painted by any artist resident in Australasia,’ and is judged by the trustees of the Art Gallery of NSW. This year’s finalists for the Wynne, Sulman and Archibald Prize 2020 have just been announced from a record number of entries, and Bluethumb favourite Kim Leutwyler has once again made the cut, along with Wynne finalist Hubert Pareroultja and Bluethumb Art Prize 20 judge, Blak Douglas! Kim Leutwyler‘s work explores the complex and fluid nature of identity and social constructs, with an approach that utilises traditionally male-dominated techniques in art. Current social norms are mirrored and challenged through Kim’s portraits and choice of subjects. Over the years, she has become a celebrated artist and prominent voice within the queer community, who despite the urgency of her message, reminds us to keep things fun while we change the world.

In what’s now her fourth year in the Archibald finals, Kim has revisited a previous subject with a slight spin. Brian Firkus is the creator of drag persona Trixie Mattel, an American drag queen, singer-songwriter, comedian, author, and television personality. Trixie is best known for being the winner of the third season of RuPaul’s Drag Race All Stars. “I became enamoured of Trixie, drawn to her unique brand of comedy and musical talent. Brian (the man behind Trixie) is half Ojibwe and comes from a Native American family living in Wisconsin. He had an abusive stepfather who would call him a “trixie” when he acted feminine, which would later inspire his drag name. Brian has an incredible story, so I couldn’t resist reaching out for a portrait sitting.

“This is my second portrait of Brian, the first of which portrayed him in full drag as Trixie Mattel. Our initial sitting took place backstage at the Enmore Theatre in Sydney, just before Trixie’s performance of her one-woman music and comedy show. For the second portrait sitting I traveled to the United States to meet Brian at his home in Los Angeles, California. To my surprise, he opened the front door in nothing but a towel…happy birthday to me! He then picked out an outfit that reflected his country roots, wearing a bush hat that he picked up while touring in Australia, along with a flannel shirt and a small fly pin that his friend Katya (co-host of the web series UNHhhh) gave to him. I returned to Australia to finish the painting in my home studio in Redfern. I frequently sent Brian photos and time-lapse videos of the portrait in progress, and we collaborated on the colour scheme for the abstract elements of the portrait.”

“I am SO excited to be a finalist for the 4th time,” Kim says in response to the news. “It’s always such a treat to get to queer up the walls of our major cultural institutions.” Want to get a closer look at the finalist piece? Meet Brian exclusively on Bluethumb here.

Blak Douglas needs little introduction. A contemporary artist with Dhungatti roots, his bold work is instantly recognisable by its simplified composition yet incredible detail in colour and design. He beckons a viewer to interact with scenes and subjects alike with culturally and politically charged themes, slightly layered by irony and sarcasm.

Blak Douglas has painted Dujuan Hoosan, an Arrernte and Garrwa youth who, in 2019 at the age of 12, became the youngest person ever to address the UN Human Rights Council in Geneva, speaking out about juvenile incarceration in Australia. An angangkere (healer) who speaks three languages yet was considered a ‘failure’ at school, Hoosan is the subject of a recent ground-breaking documentary, In my blood it runs, which provides a powerful voice for the need for First Nations-led education and raising the minimum age of children in detention. Writing in the sand by Blak Douglas.

“‘In painting the portrait I’ve attempted to marry Dujuan’s divine youth with his inherited ancient wisdom,” Douglas says. “My customary seven bands in the background represent the Seven Sisters, here stylised in the colours of the Northern Territory flag. The text is quotes from Dujuan, presented as lines written on a school blackboard.”

Both Blak Douglas and Kim Leutwyler will form part of this year’s judging panel for Bluethumb’s Art Prize 20. If you missed the memo, you can find out all there is to know about the upcoming prize here. 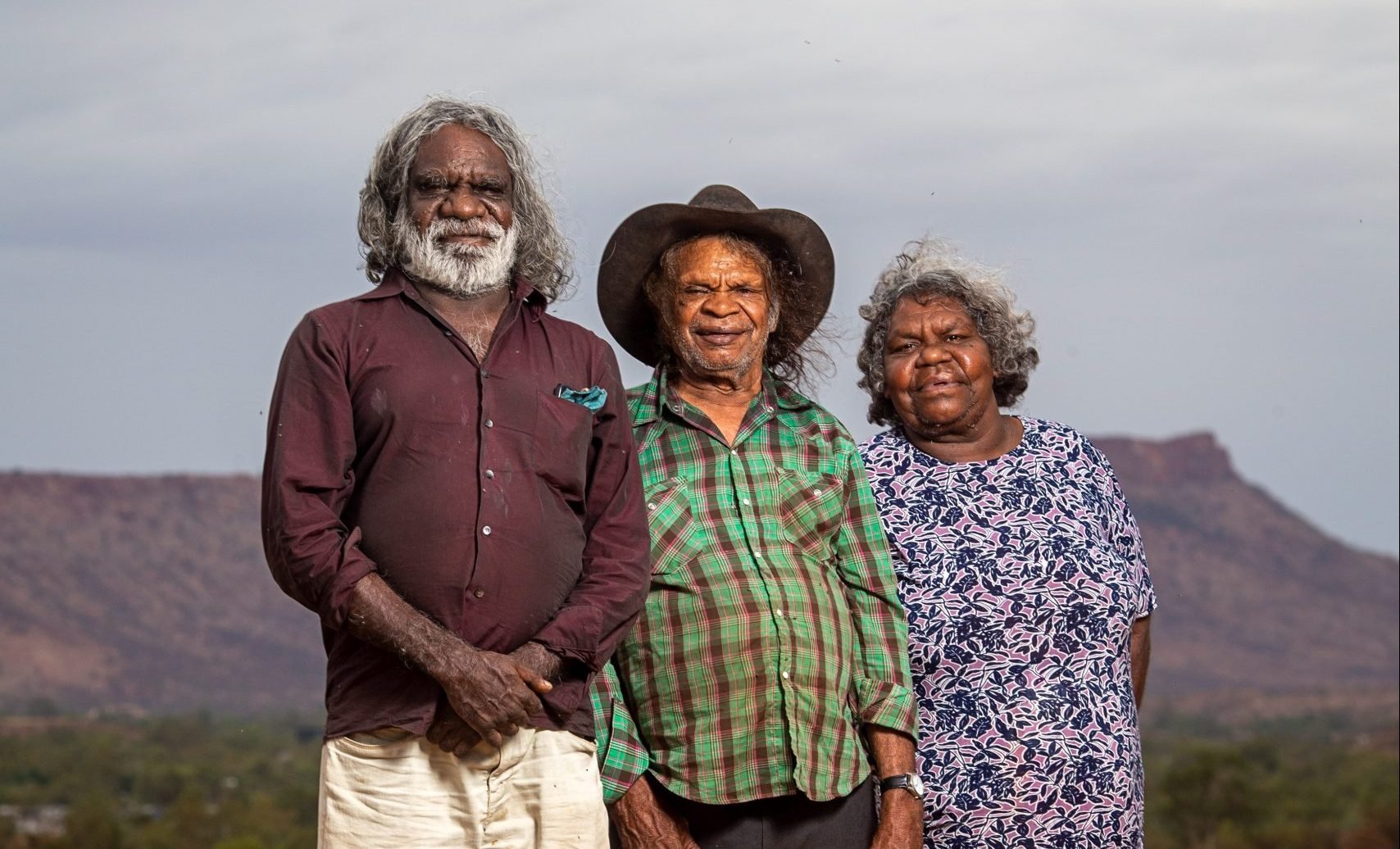 Hubert Pareroultja with Mervyn and Marlene Rubuntja at this year’s Desert Mob. Photo by Rhett Hammerton.

Announced at the same time, Hubert Pareroultja is a finalist in this year’s Wynne Prize. Hubert has been painting watercolours since he was a young boy, having watched the original Hermannsburg School watercolour artist Albert Namatjira and his father and uncles as they painted. He paints many of the same locations that Namatjira and the Pareroultja brothers painted, in particular Hermannsburg, Mt Sonder and James Range. Hubert lives and works in the Western MacDonnell Ranges to this day. Almost 100 years since its launch, The Archibald Prize has become Australia’s most popular art award. Its prestigious place in the art world remains an unbeatable hall of fame for Australian culture and it’s most celebrated faces. The Archibald Prize 2020 follows a tumultuous time when celebrating the achievements of others is paramount. You can see the complete list of finalists for 2020 at the Art Gallery of NSW website.