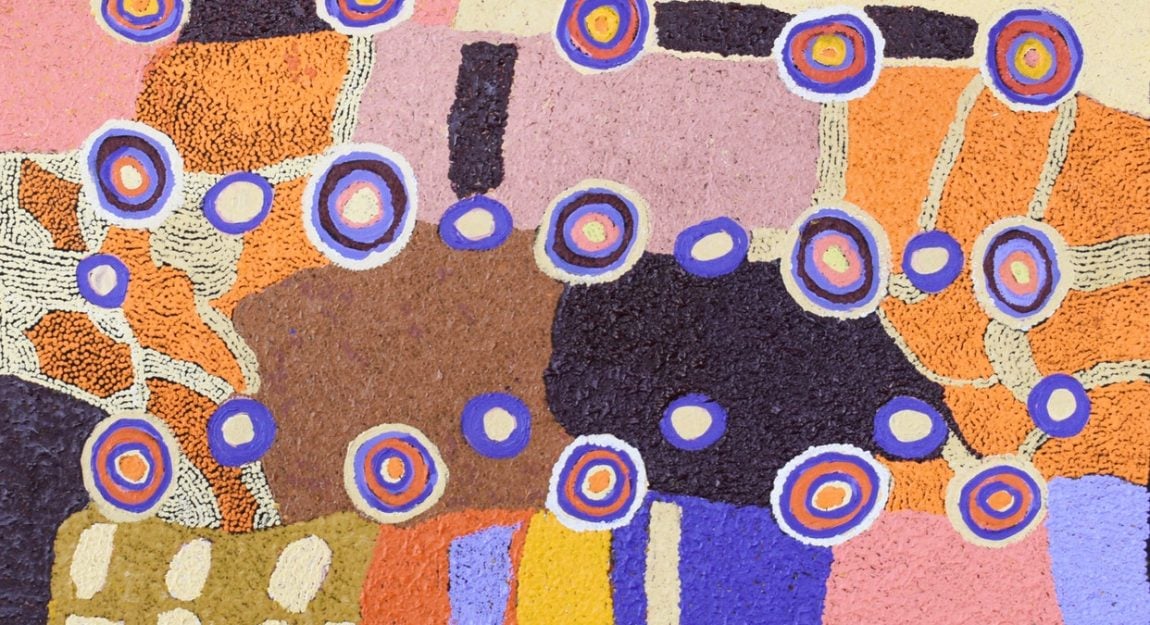 Few, if any, art styles lay down the cultural significance of Australian land like Indigenous art. While there is no written language for Australian Aboriginal People, Indigenous art was born out of storytelling. The cultural significance and use of the land, history and beliefs, as well as age-old stories of survival, are commonplace chronicles in Aboriginal art, and are conveyed through a variety of symbols and icons in artwork. The exact significance of these symbols varies from region to region, but all display a respect towards the subjects of their stories. Get to know the stories passed through generations by reading up on the ten most commonly used Aboriginal art symbols below!

Think about the shape you create when you sit cross-legged on the ground. This mark on the earth, a U shape, has come to represent a human in Aboriginal art. Whether the subject is male or female can be determined by the utensils and tools beside the U shape. In this piece below by Maime Butler, groups of women gather around a fireplace cooking the food caught after the day’s hunting. Maime conveys Women Hunting in her nearby surroundings of the Ngaanyatjarra lands. The purple clusters are the rocky outcrops typical of the lands she lives in.

Deviating from the U shape emerges a symbol depicting a hunter. This symbol is formed from the U shape body and is usually accompanied by a line. The line is most commonly the hunter’s spear or similar weapon. Noongar artist Dennis Kickett tells the tale of men who would go out on the hunt for large game, as the women gathered types of vegetation and small game. 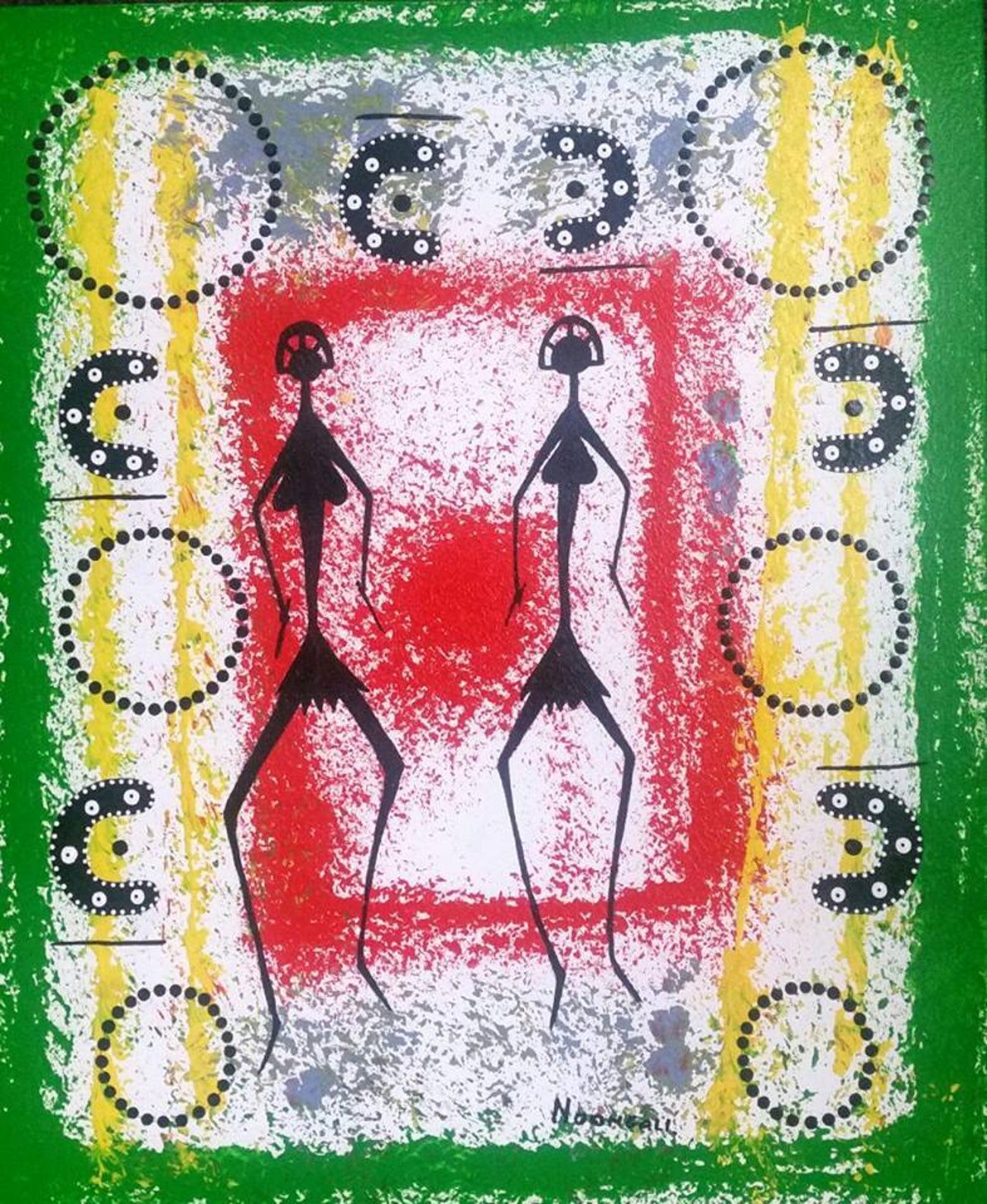 Hunters and Gatherers by Dennis Kickett is laden with Aboriginal art symbols, and shows the traditional roles of men and women on the quest to find various types of food.

It’s easy to overlook the importance of this symbol in Aboriginal art, but the waterhole plays a critical role in desert survival and so is paramount in Indigenous artwork. Not only do they occur in stories because of their physical presence in history’s tales; they are seen as sacred places, and convey how essential they are in the Aboriginal people’s beliefs. Below, Justin Ronberg has used the waterhole as a “meeting point” for these dancing animals in Ukaka, all of which hold their own symbolic significance in Indigenous art. The dots around the waterhole represent the various Aboriginal communities of the land, all of which share the land with a mutual respect of each other and the animals that inhabit it.

It’s not uncommon to see tracks that depict running water as it stems from waterholes in Aboriginal art. Since so much of Australia’s outback is dry, arid landscape, running water is a treasure in several communities and a valuable part of Indigenous storytelling. The lines in artwork can involve the elements of a storm that brings the precious flow of water to the dry creek beds – as can be seen in this piece by Ada Andy Napaltjarri. These ancient reptiles are frequent subjects in Aboriginal art since they have so much significance within Australia’s Indigenous communities. As a traditional source of bush food, goanna paintings come in traditional and contemporary works, their weight in the artwork depending on the artist and the region they come from. The water goanna in the piece below inhabits the wetlands of the Western Arnhem land, home of the Kunwinjku people. These monitor lizard, along with their eggs, are known by local residents as a tasty delicacy! Here Don Namundja depicts the Burarr, or water goanna, in the signature Kunwinjku ‘x-ray’ style. Kunwinjku art is one of the oldest continuous art traditions in the world

From the symbol of strength to the serpent of creation, the snake is a major character in many Aboriginal art stories. Throughout Australia’s indigenous communities, it is respected as a strong force within the animal kingdom. Aboriginal artist Michelle Kickett reflects aspects of the traditional Noongar landscape and culture through her work; here is an example of how the animals local to a region can inspire its Aboriginal inhabitants, as Michelle uses the tiger snake as the core of the piece Noorn Boodjah – Snake Country 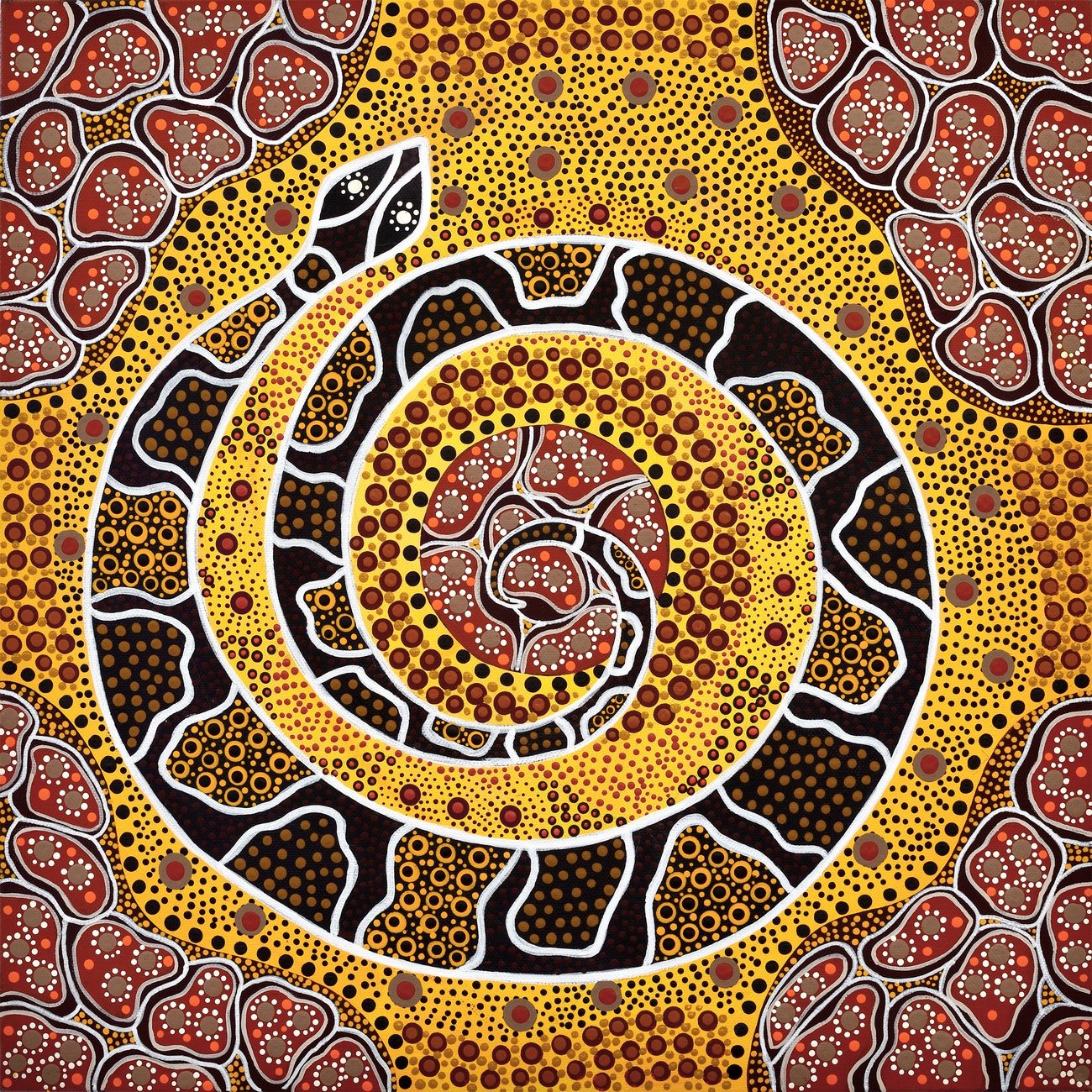 Michelle ‘Wilura’ Kickett tells the story of the Tiger Snake that dwells in the South-west of Australia, as it emerges after hibernation.

The coolamon is much like the original Aboriginal backpack – its bowl-like, oval shape is primarily used as a gathering tool, or a utensil to hold food. Cut from the bark of trees, deep coolamons are typically used to carry water, or to rock babies to sleep.

The coolamon makes itself known throughout Aboriginal art and a myriad of stories. After spending years watching her mother and father paint, artist Geraldine Nowee often paints the landscape of the desert region, including the various flowers, seeds and bush tucker that periodically dominate the sand dunes throughout the year. Geraldine shows us here how coolamons are customarily used to carry seeds in this region. Geraldine has painted Minyurrpa, her mother’s country, where dots represent an abundance of seeds spread across the landscape; alongside the seeds are the coolamons used to carry them and the sand dunes that ripple across the desert region

Rockholes are another example of which a geographical place becomes a sacred space within Aboriginal storytelling. Rockholes often provide a source of water, but they are also a prime spot for spiritual and cultural ceremonies. In much of the country, Aboriginal communities relate the rockholes of the region with their own local stories. Pukara Rock Hole in this artwork by Jimmy Donegan, for instance, is a Mecca for the region’s stories. One can learn the lay of the land, as well as stories of battle and disputes, injury and recovery, seasonal flora, resources and water – all waiting to be found at Pukara. Based on a prominent Aboriginal art symbol, the stories attached to Pukara Rock Hole are plentiful. Jimmy Donegan attributes this piece to the rock hole and its renowned stories that reside within his country

Legend has it that Mimihs were the original spirit beings and taught Aboriginal people many of the skills they needed to survive in the bush along with ceremonies, dance and song. According to the Kunwinjku people of western Arnhem Land, the mimih spirits are seldom seen by human eyes, but continue to reside in rocks, trees and caves. In the rock art of Arnhem land, these spirits are depicted as small yet dynamic symbols with hunting weapons. Several artists of the Injalak Art Centre tell the stories of mimih spirits through their art, such as this piece by Michael Naborlhborlh. Michael Naborlhborlh brings the Arnhem land to the viewer in this piece, Mimih Spirit Hunting 6773-18

Food is at the heart of every culture, and Aboriginal stories are no exception! Bush onions, potatoes, tomatoes, bananas – they are all types of bush tucker waiting to be gathered and grazed on! This food is native to Australia and is part of the culinary delights for Aboriginal Australian people. It is commonly represented by symbols of flora and fauna, usually with branches and berries, as seen in this artwork by Carol Kenny. 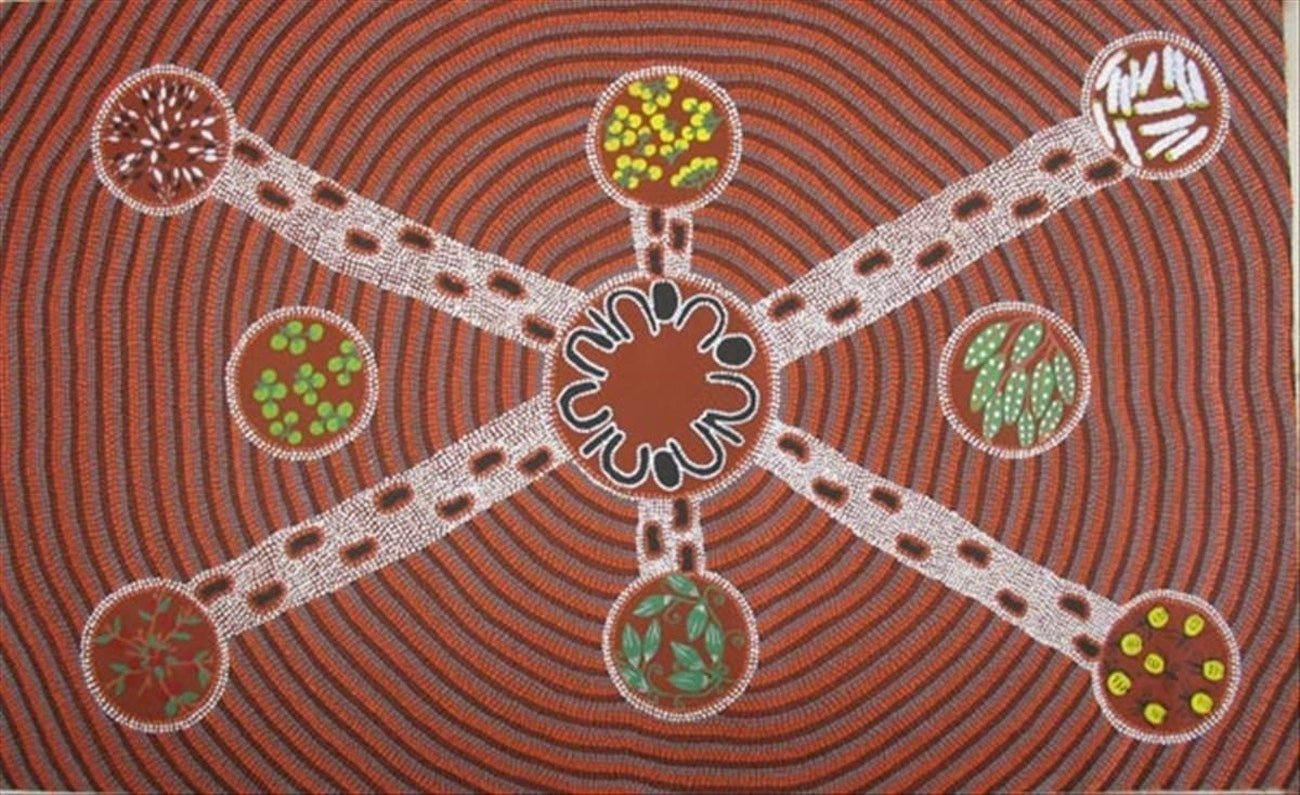 Ladies (Coongas) going Hunting for Bush Tucker by Carole Kenny shows the U-shaped females with their coolamons, ready to find an abundance of bush tucker!

Supporting Indigenous artists and art centres is one of Bluethumb’s primary visions, and we are always seeking the opportunity to promote the talents and customs of Aboriginal artists. The recent Revealed WA Aboriginal Art Market, Perth’s yearly “must-attend” event, sees thousands of art aficionados admire original, affordable artworks direct from artists and art centres recognised by the Indigenous Art Code. These artworks by Michelle Kickett flew off the shelves!

As Bluethumb’s first year involved in the event, we are thrilled to say that the day was a huge success with all 6 artists exhibiting making rewarding sales! A lot time and energy went into the event; seeing people come from all over Australia fall in love with and take home Aboriginal art means the hard work paid off. We’re already excited about next year! 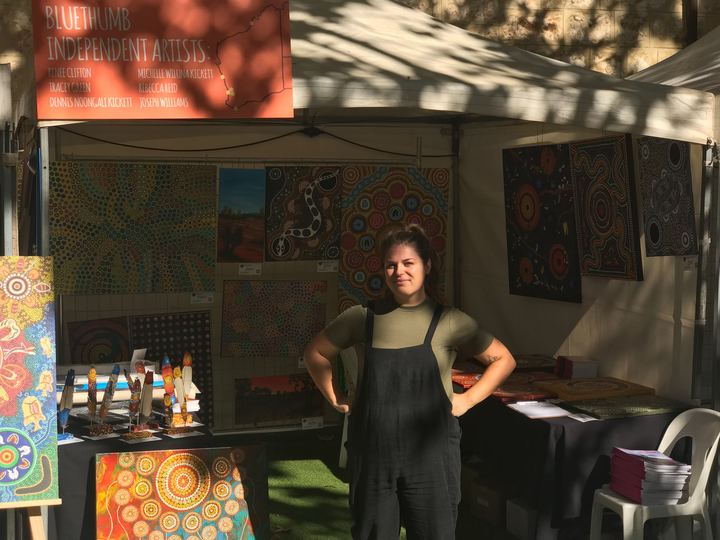 Bluethumb curator Sarah getting ready for a very eventful day at the market, with PR and comms manager Freddy behind the camera.

To understand Aboriginal culture and its art, it’s imperative that the knowledge of these symbols is passed on. These Aboriginal art symbols are a fundamental part of preserving the culture of these communities from which they originate.

A Guide to Aboriginal Art Styles