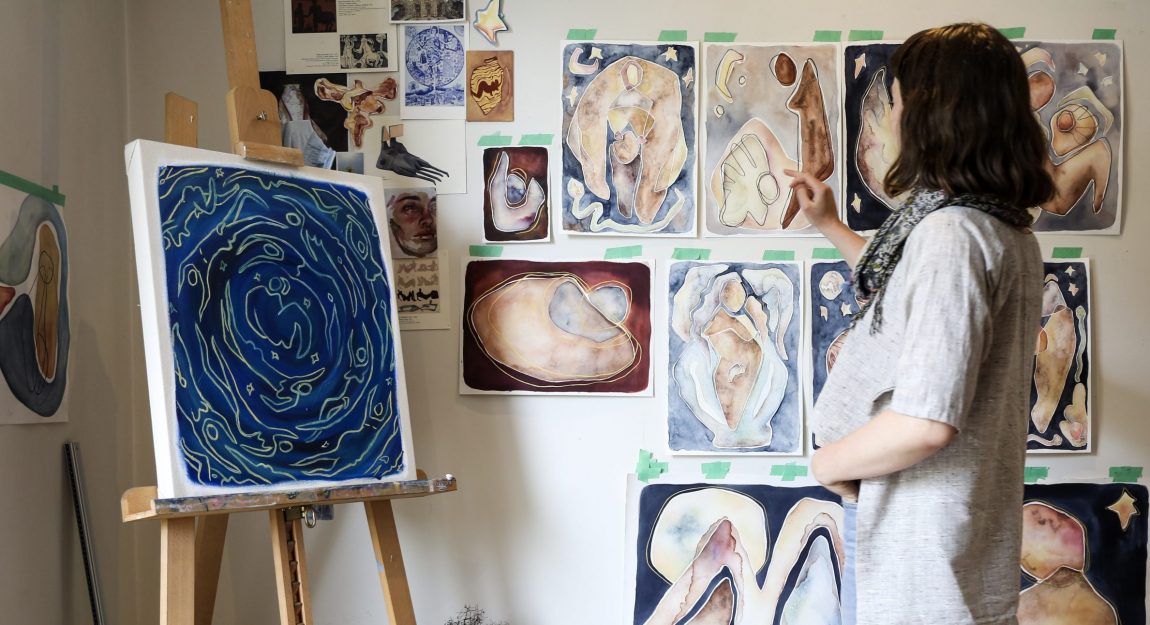 A unique eye and slow, constant curiosity fuel artist and yogi Kara Mandel’s sense of exploration, and ultimately, her practice in both vocations. Hailing from the US, Kara has been calling Melbourne home for the past four years, and has throughout the years developed a deep sense of self-inquiry through her work that in turn encourages the viewer to do the same. As she embarks on a year-long journey through New Zealand and Australia, we caught up with the artist to discuss the internal and external inspiration behind her creations. Kara Mandel has found a supportive network in Melbourne to call home to her practice. “It’s always interesting attuning to a new environment. I don’t know if I would have thought about going into art the same way after college. I moved here with my partner after months of travelling, and with no money, I felt like I needed to seriously look at what I was going to do if I was going to live here. I’d studied art; I’d studied yoga and meditation… Why not go for it?”

Creativity has never been in short supply for Kara. “I’ve always been a very tactile person. I sketched a lot in high school and went to uni to study nutrition. After my first semester, I had this moment where in the space of 24 hours I went from deciding I was going to be a nutritionist, to going into the fine arts. I hadn’t even reached the nutrition aspect of my degree because in the States you have to study two years of general education at uni, and I was still in my first year of that. By the end of that year, I’d decided to go into the Arts program.” Rituals in Night traces back to the first in a narrative series of Kara’s portraits exploring cosmic connections and symbolism.

Kara Mandel’s approach to her artistic practice could be seen as receptive. Since her time studying fine art, themes are received, rather than sought out. “I had an instructor at uni, and at the time I was doing a bronze sculpting class. It’s a time of challenge, when you’re working with something new. And sometimes you feel like you have to create something of value or quality from the start. He told us that if we didn’t know a theme to work on, just start making things that you like and eventually you’ll notice that there’s a common thread through all of it. And that seems to be something that shows up in my work. A lot of times I can feel these little inklings that show up and painting itself is what teases out that inkling.” Kara’s studio just so happens to be her home too! With such beautiful natural light, who could blame her?

“At the moment, I’m working with creation stories, mythos and seeds of that, which seem to be present and showing up in my work time and time again. I suppose this is in an archetypal sense as opposed to specific myths. It’s kind of teasing out elements of my own cosmology. And then of course some of the elements that are present in most creation stories. It showed itself to me a lot in my field in the past year. There’s a few books that I’ve come back and re-read. Quite a lot of what I was surrounded with had that mythos and creation story element to it. Then, funnily enough, I recently learned some stuff about my own family. And in a way, this is me subconsciously, and playfully, working with that.” “The colours here are mainly just colours that I like or that I’m drawn to. The more saturated pinks are relatively new, but the reds, the dark blues and the browns – I’ve always been gravitated towards colours that show up in nature. Red has always reminded me of blood, and I’ve always been really fascinated in the biological nature of our environment. The palette started off with those colours. And then as it becomes more dreamlike, it’s evolved into the palette I use now.”

“Some of my work has been lacking that playfulness in the past. Not that it was dark, but it was more serious. I felt a big shift about a year ago. I think I intellectualised it too much, instead of allowing myself to fall into what was next for me. For the first six months of this year, it was just frustration after frustration. And then there was this moment where I just thought, f*ck it,” Kara laughs. “Since then, it’s opened up this really playful energy. I think it’s something I’ve been longing for in my work for a while now.” “This is pretty much all one pigment; it just depends on how it’s been manipulated. I’ll have an idea of the shapes before I start. I can get an idea at anytime, like if I’m driving or walking, shapes come into my mind, so I’ll stop and sketch it down really fast. Beyond that, the colours always come through as they do. I love seeing how they play and interact with each other.”

From Kara Mandel’s own story of taking a leap into the unknown, the advice she would give others is similar to that which she was given. “Start with what you like and allow the pattern to reveal itself. I think dropping expectation is important, too, as that’s what’s worked for me,” Kara explains. “I can see how my practice has shifted since college. I learned so many incredible skills there and it was really beautiful to learn that academic approach, but I was also really focussed on finding out what exactly I was trying to communicate, and because I was so focussed on that being the end result, it really narrowed my scope and it didn’t feel as creative. Instead of allowing it to be a very expansive approach, it really constricted me.

“This year, I’m sensing the change in my work. You can tell yourself time and time again, but sometimes the lesson has to be learned over and over again that I need to allow myself time to explore. I still wanted specific outcomes, instead of letting the theme reveal itself. Another thing is simply staying in tune with life. All these ‘aha!’ moments come after going to see something like a dance performance, or those really beautiful experiences that inspire you.” “I have a deep fascination for how an individual’s personal and collective experience shapes their perceptions of the world to create a lens through which they define themselves.” Reverence by Kara Mandel

As her artwork somewhat subconscious depicts, dance is a strong passion of Kara’s that feeds ardour into her artistic practice. “I’ve always moved a lot and my body has always been a modality and a place of comfort for me. What I love about dance is that I can go and watch it and it can be purely for the sake of enjoyment. I might find glimpses of what it’s about but it’s not like me always going to see a painting and trying to think about what the colours mean. Dance is all about the pure, unadulterated enjoyment of it. Nature is a huge one for me too,” Kara adds. “And, of course, it always goes back to pleasure. Doing things that give you pleasure. Find something that pleases you because you’re so much more likely to come back to it in those frustrating moments.” “When it’s not incredibly frustrating, painting has a sort of meditative process through the work. There’s a lot of reverence. A big element of that process as I work is teasing out more specifically what is being communicated. I find myself asking more questions. Painting allows me to work through my curiosity of the world. And so rather than providing stark black and white answers, I hope it sparks curiosity for people who are looking at it.”

Much of the intuitive process Kara carries forward in her work relates to the power and eros of the female body. “We tend to reside so much up here [in our head], I find the more feeling realm of the body has helped lead me. I think it’s present in male bodies as well, but the direct symbolism tends to be tied up with the female body, because it’s related so closely with those feminine elements of expression. We really neglect the intelligence of the body and there’s really something to be said of tuning into that. My belief is that by doing so, we lose a lot of the friction in life. I notice the seasons and cycles in my body and rather than trying my hardest to fight against them, it brings recognition of what works for me now and what works for me at other times, and allows that fluid, undulating process to happen. A lot of my focus in yoga has to do with our life force energy and our eros being stored in the lower half of the body. That kind of life force energy that gets us up and going in the day is raw, creative energy.” “A lot of the symbols that show up in my work have to do with natural elements and elements of the earth. I often paint things that look like seeds. I used to paint in menstrual blood, and I suppose there’s a lot of symbols that show up that would allude to pregnancy as well. It feels like there are gestations periods in my art…  And so, it seems quite natural to me that my expression of it would be feminine. It’s present in all bodies. For me, I might have the capacity to have a child from this place, but it’s also where a lot of my creative ideas come from as well.”

Look out for Kara’s upcoming works on her profile on Bluethumb. You can also check out some of her work soon to hit Off the Kerb Gallery in Collingwood, Melbourne at the end of March 2020.

10 Local Melbourne Artists You Should Know