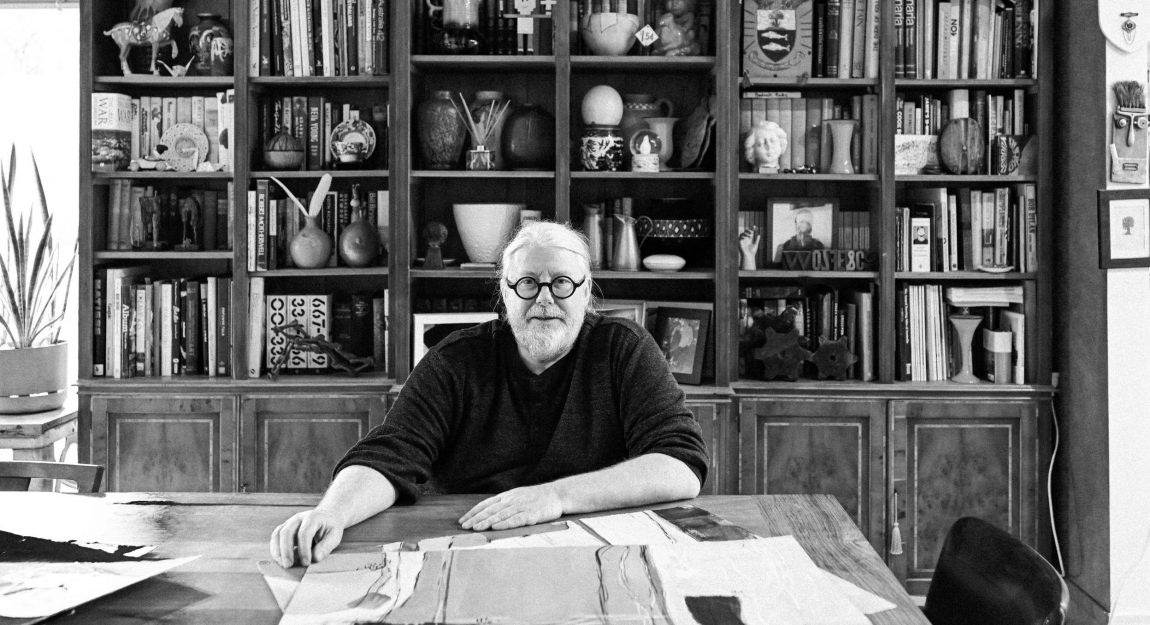 Michael Wolfe takes his talent across various mediums. A painter, photographer and designer (he’s even an acclaimed spin bowler!), Michael has been working with his creative pursuits throughout his adult life. He’s had over 30 solo exhibitions and numerous group shows, taking his work from the local grounds of the 2019 Ballarat International Photo Biennale and 2019 Castlemaine State Festival, to international waters. His widely exhibited, warm-hearted landscape paintings have made Michael revered by collectors home and abroad, but it’s the multiple techniques across his styles that offer us a new way of seeing the world. 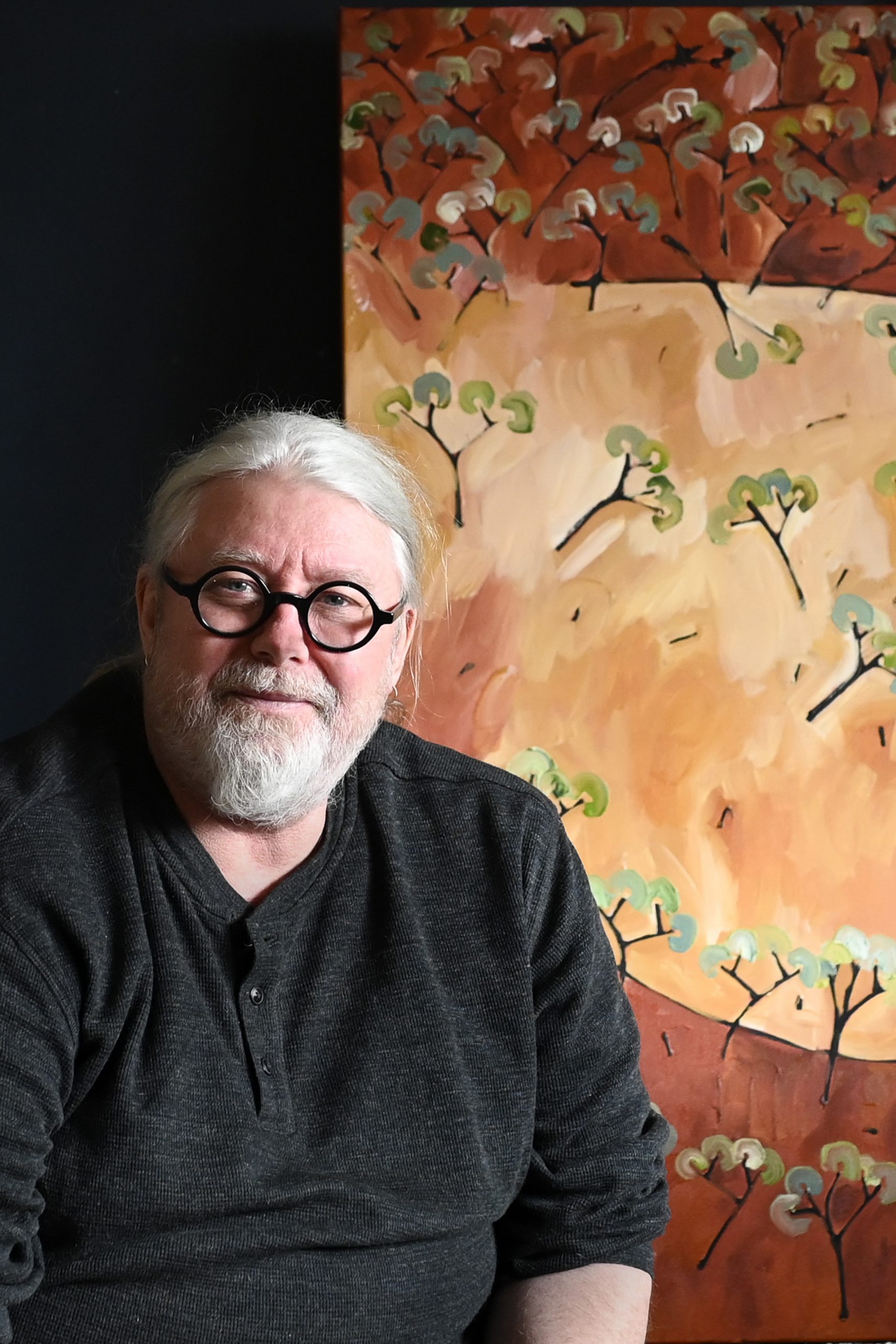 Michael Wolfe captured with one of his signature landscapes.

The work of Australian painter and printmaker Fred Williams was a catalyst for Michael Wolfe’s own creative practice. “His vision and ways of seeing the landscape changed the way I see it forever,” Michael tells us. He also attributes his initial motivation to follow a practice in landscape painting to his two mentors and friends: “John Wolseley, who I first met in 1985, and Bill Delecca, who was head of La Trobe art school when I was there in the 80’s. Landscape painting was deeply unpopular in art schools at the time, so it was a great blessing to have Bill and John there for encouragement and support. Bill opened my first solo show in 1988 and John my most recent show in May this year.” Maiden Gully I is inspired by Castlemaine’s changing seasons – “from the lush winter and spring grasses to the bleached harsh light of summer that provide an inspiring backdrop and interplay between the creek washouts, saplings and scrub.”

Alongside his painting practice, Michael also excels as a fine art photographer. “I really think about photography in two ways – first as painting with light, I love to do multi-exposure photographs which give a softness almost like impressionist painting. The other photos I take tend to work around themes, exploring the nature of a subject as a series of photos.”

“My most recent exhibition Someone to Watch Over Me – The Better Angels of Our Nature is a collaboration with writer Kirsten Krauth and using the lyrics of Nick Cave,” Michael says. “[It explores] the rituals of remembrance as expressed in memorial statuary and reflections on loss, sorrow, absence, melancholy and letting go. In these uncertain times we wanted to ask the questions: how do we appeal to the better angels of our nature and where are they just when we need them the most?” Michael Wolfe uses multiple exposure among other techniques to encourage a fluid and ambiguous realm between fiction and reality. Featured: Glenluce, Oak

Inspiration for Michael’s subject matter is never afar when living in such a beautiful part of Central Victoria. The artist cites rolling hills with granite tors and boulders and a landscape from dense forest to open plains as references for his landscapes, as well as the often harsh climate, with hot dry summers and cool winters. “There are rivers, reservoirs and dams, extinct volcanoes, unused quarries, gold rush ruins. It is, in short, filled with interesting and inspiring outlooks to draw and paint.” “I have a vague plan of where I thought these paintings would go – bold, calligraphic, reductive – and then, well, I just let the paintings, let the marks lead the way and I just followed where they took me. I wanted them to function as both purely abstract, as gesture and pattern, arrangements of forms; and as landscape, a flattened topographical view with no illusions of perspective or space except that which happens on the surface.

“I’m not sure where they’re heading, but it’s always exciting to go somewhere new, particularly at a time when you can’t really go anywhere. For me they’re a kind of remote, armchair travel – an unreliable travelogue – where past experiences and daydreaming intersect in a jumble memories and sensations.” Michael’s work ties beautifully in his own Castlemaine home.

Although you’ll find Michael Wolfe on Bluethumb’s Collectable Artists page, defining what it is that makes a collectable artist can be a somewhat subjective process. “[It’s] an interesting question! I guess it’s about having a sustained career and having work in public collections and I’ve been lucky enough to be included in collections like Bendigo Art Gallery. The most important thing is to really love the artwork, I really find people respond to the colours and forms, the feelings the landscape can create and the sense of place.” Michael in his studio.

Michael Wolfe can look back on over 30 solo exhibitions and numerous group shows, of which he notes his inclusion in the 2019 Castlemaine State Festival with the exhibition ‘Shimmer’ as a highlight of his career. Other career peaks include the 2020 contemporary landscape survey show (Con)textural Landscapes at Bendigo Art Gallery; the 2021 Ballarat International Photo Biennale and his collaboration with renowned Australian author Alex Miller in the international collaboration project and exhibition Now & Then in Shanghai, China. What’s next? “It’s a kind of funny ambition, but I’d really like to have a painting featured on The Block! I really enjoy working on collaborations – with writers, poets, musicians and designers. I’ve had some work installed in new commercial and apartment builds and this is an area I’d like to keep exploring – along with the windy back roads for the next big sky and horizon to capture in a painting.”

You can catch Michael’s exhibition Someone to Watch Over Me – The Better Angels of Our Nature as part of the Ballarat International Foto Biennale until January 2022. Click here to see his work anytime, anywhere.