Currently living on the beautiful NSW Central Coast of Australia, Karen Bloomfield works from a tiny rented studio in an artist cooperative at North Gosford. Having completed her Diploma of Fine Art from the Newcastle Art School at the end of 2014, it is hard to believe this prolific artist began her trade only 5 years ago.

Born in Toronto, Canada, Bloomfield immigrated to Sydney with her family at the age of 5 and grew up alongside her older sister; the daughters of middle class working parents. When asked about her artistic predilections, Bloomfield recalls early memories “of being 3 or 4 years old and drawing my surrounds in a doctors waiting room. I guess at a time when the other children were doing stick figures, it may have been an oddity to be drawing graphical representations of internal architecture!” 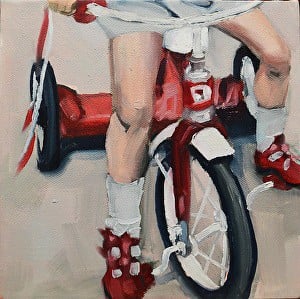 However, although always drawing, moulding from clay or making ‘things’, Bloomfield was discouraged from taking any art classes at school. “My mother wanted to funnel my creativity into pragmatic pursuits – like architecture – and insisted that I study technical drawing & engineering science.” For her compulsory school work experience, Bloomfield worked in the offices of the esteemed architect Harry Seidler. “Whilst I enjoyed the impressive offices (overlooking Sydney Harbour & Luna Park) and the corporate world of high profile Mr. Seidler, I spent two weeks making photocopies and drawing toilet blocks! I hated it.” 3am by Karen Bloomfield

In an effort to honour her mother (who died during Bloomfield’s last year of high school), Bloomfield studied Industrial Design but dropped out after her first year. “I felt like a fraud. Every day I would watch the wacky fashion students walk past with their cardboard patterns and think ‘that’s where I should be.’” Accepted into Sydney’s top fashion school, East Sydney TAFE, Bloomfield spent 2 years learning her trade. Graduating with honours, Bloomfield’s greatest achievements were in the classes of Fashion Illustration. “I still operated from the belief that I had to have a solid trade and continued to ignore the signs that I was an artist first and foremost.” After graduating, she spent 7 months travelling through Europe, UK, Northern Africa & Russia. Returning to an Australia in the grip of recession with a depressed fashion industry, Bloomfield took a job modelling for a small fashion parade company. “I was affectionately known as the ‘fat model’, being a size 12 amongst very skinny girls.” Within 12 months Bloomfield purchased the company and successfully ran it as a partial franchise for several years until demand no longer supported the format. By this stage Bloomfield had gained invaluable management, staff training and small business experience and so was snapped up by a large department store as a manager. “A fraud again! At 23 I was the first external manager ever hired and youngest one to boot.” But corporate management wore her down and when her future husband proposed just 18 months into the role, Bloomfield jumped! They relocated to Brisbane and for the first time ever Bloomfield was a ‘housewife’. “This suited me far less than anything else I had ever done. I had never learned to cook or keep house and I hated it. I was also starting to understand what it really meant to have lost my mother so young.”

Two children, several businesses, a ‘tree-change’, yet another foray into corporate life and finally the penny dropped. “I was about to turn 40, the age my mother was when she died, and I just lost the plot. I had done nothing for myself. I put everything on the line and so, along with 90 other hopefuls attended a mass interview for 18 positions in a Cert III Fine Art course. I secured a spot and never looked back.” Five years and a Diploma of Fine Art later, the art that Bloomfield makes is clearly infused with her life experiences. Her signature charcoal portraits are a fusion of emotion and draughting skill. Many of Bloomfield’s works explore the shadows and angles of urban cityscapes, the architecture of humanity and our place amongst it. “I draw upon and about truth. So much of my life, both as a child and adult was lived in a veil of half-truths and so I am mostly inspired by and interested in the truth of my subject regardless of whether that is pretty or not.”

Typically, Bloomfield’s art student years were lean but this led to the adoption of her signature material: plywood. “I was preparing for my first exhibition and couldn’t afford canvas nor large sheets of paper (to say nothing of framing!). I was rooting around in our shed and came across some weathered and damaged plywood. My husband is a carpenter and tended to hoard materials. I discovered that the solid substrate allowed me to really connect with the charcoal and work it as hard as I needed to to resolve the work.” 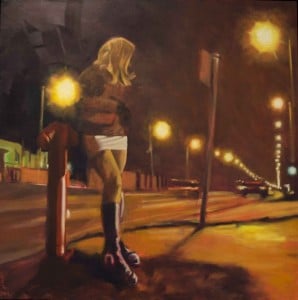 So whilst charcoal & plywood are a staple, Bloomfield’s close cropped, intimate oil paintings have given her the opportunity to see through a very different perspective. “I see beauty in so many mundane things. Street lights, prostitutes, an airport tarmac, the legs of a child or glinting lights of a ship out to sea: these are the expressions of humanity without words to cloud or misrepresent their meaning.”

Looking back over her first 3 solo shows a pattern has emerged. Bloomfield creates each carefully cropped image to be far more than a ‘pretty picture’. There is a little bit of melancholy, architecture and truth in each piece. Her exhibitions are a story of self- discovery and story-telling filled with the humour and pathos of struggle and experience. Karen in the studio.

And the future for Bloomfield? “It is a dream come true to be able to bring my many different skills and experiences to something that I derive absolute pleasure from. I have won some accolades to date and feel utterly grateful to be awarded for expressing my journey and myself. I feel that I am just now finishing my apprenticeship and know that this is my path. Bring it on.”

Bloomfield has received awards in domestic & international competitions. Her work is collected internationally and she is sought for commissions of portraiture, animals and cityscapes. In her first 5 years (whilst still at art school) she has hung 3 solo shows, 2 collaborations and been invited to hang in innumerable group shows. Her portrait of Fr. Jim Boland, completed for the 2013 Archibald Prize, hangs on permanent display at the NSW Police HQ in Parramatta.

Signup to our newsletter to see more great new work by Australian artists.