The Resurgence of Illustration

So we all love art. Art is a visual expression of imagination, it tells stories and records history. Art allows us to remember the old and imagine the new. One particular type of art that has been used since cave man days to do this is illustration. Being a lover of art and emerging illustrator myself, I thought I’d write about the waves of high and low that is ‘Illustration in the Media’.

Historically the employment of illustrators in the media boomed around the 1870’s in Europe and after World War 1 in America. Newspapers, mass-market magazines, and illustrated books became the dominant media of public consumption. Power to the brush and pencil! 🙂 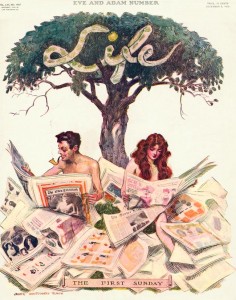 Then BOOM…  The age of the computer. It all happened very quickly. Instead of employing artists it became more efficient to graphically design advertisements on computers and digitally produce photos. Illustration was no longer modern enough and sadly rarely called upon. Personally, growing up my only memory of illustration in newspaper and magazines was the funny pages. Sigh. An example of an interview article from a magazine who has employed an artist to illustrate the interviewed.

This industry change is great news for us artists. We are now more attractive to employ commercially than a decade ago. It’s becoming evident that urban readers appreciate the extra care and effort that goes into the creation of a work of art. Personally when I pick up a Frankie and flick through the pages I love seeing all the little drawings, they make me smile. Have a look at the ad below. It’s a simple coffee advertisement… but its hand drawn. I don’t just see a cup of take away buzz.  The hand drawn lines lead me to imagine a man sitting in a cozy little café sketching away his love of coffee, with a content smile on his face. An example of illustration used in advertising taken from Frankie Magazine.

It’s so encouraging to see the media industry utilise artists again. Below are a couple more examples of art in the commercial world, enjoy.

This isn’t from the media..but it’s an album cover by Audrey Kawasaki for Alice Smith. It’s nice to see illustrations feature on not only magazine covers but in the music world too. 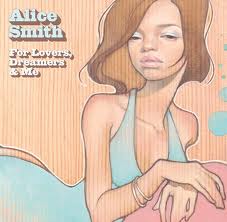 Here’s illustration for Mac Cosmetics by local artist Kelly Thompson. An example of how a business within the fashion industry employs an artist to draw a model for advertising purposes. 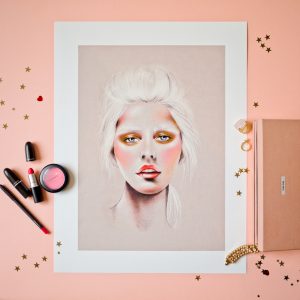 An illustration for Mac Cosmetics by local artist Kelly Thompson.

And finally we have a gorgeous cover drawn by local Melbourne artist Bec Winnel for Peppermint Magazine.