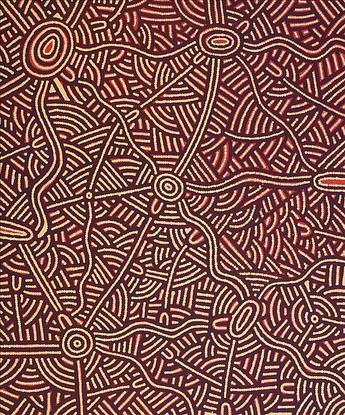 The site depicted in this painting is Pirlinyarnu (Mt. Farewell), about 165 km west of Yuendumu in the Northern Territory. The ‘kirda’ (owners) for the water Dreaming site at Pirlinyarnu are Nangala/Nampijinpa women and Jangala/Jampijinpa men.

Two Jangala men, rainmakers, sang the rain, unleashing a giant storm that collided with another storm from Wapurtali at Mirawarri. A ‘kirrkarlanji’ (brown falcon [Falco berigora]) carried the storm further west from Mirawarri. The two storms travelled across the country from Karlipirnpa, a ceremonial site for the water Dreaming near Kintore that is owned by members of the Napaljarri/Japaljarri and Napanangka/Japanangka subsections. Along the way the storms passed through Juntiparnta, a site that is owned by Jampijinpa men. The storm eventually became too heavy for the falcon. It dropped the water at Pirlinyarnu, where it formed an enormous ‘maluri’ (claypan). A ‘mulju’ (soakage) exists in this place today. Whenever it rains today, hundreds of ‘ngapangarlpa’ (bush ducks) still flock to Pirlinyarnu.

This painting needs to be framed or stretched. It’s also being sent direct from the artist at a remote art centre, Warlukurlangu Artists, in the NT desert. Please note there is only one mail plane a week that takes the artwork to Alice Springs. The tracking information is then received a week later when the mail plane returns so often the paintings are delivered before we receive the tracking information. Please expect a slightly longer wait for this very special artwork to arrive.