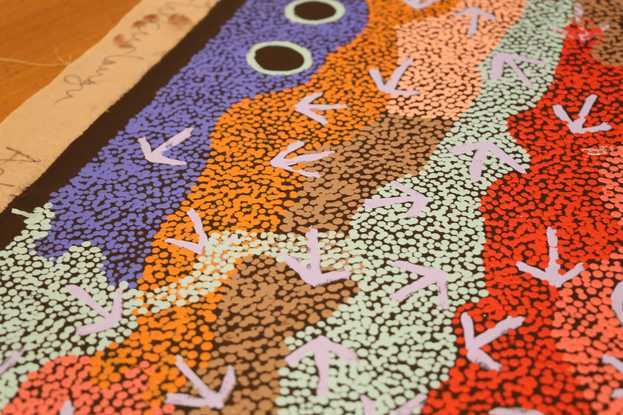 This painting depicts a ‘yankirri Jukurrpa’ (emu [Dromaius novaehollandiae] Dreaming) from a place called Ngarlikurlangu, approximately 50kms north of Yuendumu. The ‘kirda’ (owners) of this Dreaming are Nangala/Nampijinpa women and Jangala/Jampijinpa men.
This Jukurrpa tells the story of a ‘yankirri’ (emu) and a ‘wardilyka’ (bush turkey [Ardeotis australis]). ‘Yankirri’ lived at a soakage to the west called Warnirripanu (or Walangkamirirri), while ‘wardilyka’ lived at a soakage to the east called Parirri. The emu and bush turkey used to go around the country picking ‘yakajirri’ (bush raisins [Solanum centrale]) and mashing them into ‘kapurdu’ (fruit balls) to save in their nests for later. However, they were jealous of each other; the emu thought that the bush turkey was picking the best and juiciest ‘yakajirri’, and was leaving him with only the sour ‘yakajirri’.
The emu went to the bush turkey’s nest to the east while the bush turkey was out hunting and smashed up the ‘kapurdu’ that the bush turkey had saved there. When the bush turkey returned, he found his smashed ‘yakajirri’ balls and realized that the emu had destroyed them. He went to the west to confront the emu and when he found him, they got into a big fight. The bush turkey eventually flew away to the north, leaving behind the smashed ‘yakajirri’ balls.

This practice of making ‘kapurdu’ (fruit balls) is a traditional Warlpiri method of storing ‘yakajirri’; in the old days, people used to dry the ‘yakajirri’, grind them up with a rock in a coolamon, mix them with water and form balls from them, and cover the ‘kapurdu’ with red ochre so they would keep.
Today at Ngarlikirlangu we can see round, red rocks which are the ‘kapurdu’ that the emu smashed up. There is also a dance for this ‘yankirri’ (emu) Jukurrpa that is performed during mens’ initiation ceremonies. A number of other Jukurrpa are also located at Ngarlikirlangu, including ‘wardilyka Jukurrpa’ (bush turkey Dreaming), ‘yardijiinypa Jukurrpa’ (meat ant Dreaming), and ‘pirntina Jukurrpa’ (woma or Ramsay’s python [Aspidites ramsayi] Dreaming). Lots of ‘yakajirri’ grow around the Ngarlikirlangu area today. 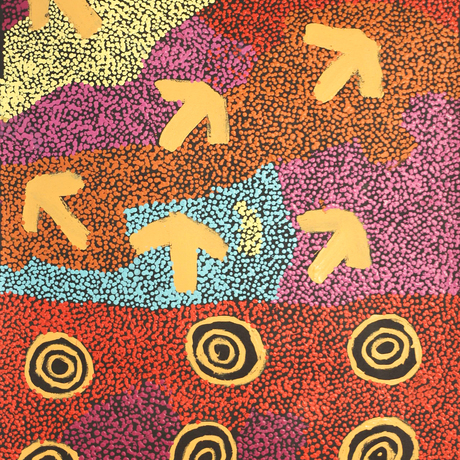