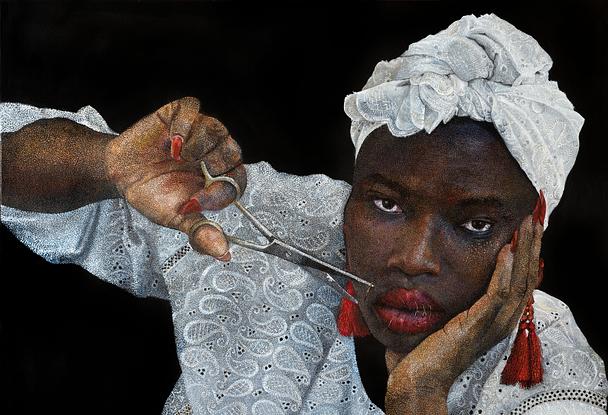 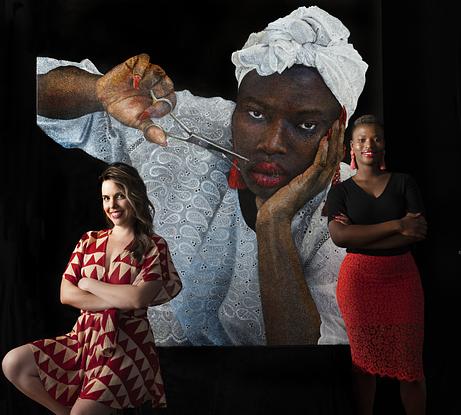 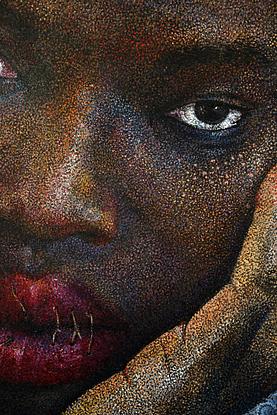 My application consists of small dots of pure, unmixed paint that when places side by side create an optical blending effect. The randomness of these apparently separate pigments are applied in such a way that they begin to coexist - just as they do in the flesh. They blend to form a photorealistic image, like pixels, but on closer inspection the layers of dots begin to separate to reveal far more fragmented, complex and abstract marks. A true reproduction of the human self.

Khadija Gbla is a high profile African Australian, award-winning human rights activist, entrepreneur and inspirational speaker. Khadija became a refugee at the tender age of 3 when war broke out in her home of Sierra Leone. Her family fled to Gambia where she remained until Australia granted her refugee status in 2001. Who knew she would become Young South Australian of the Year only 10 years later?
At nine years of age, Khadija was a victim of Female Genital Mutilation. The FGM was performed with a rusty knife on an unsterile floor of a hut. It left her with scarring complications, chronic pain, post-traumatic stress and the risk of infertility.
Khadija has dedicated her life to educating and exposing the atrocities of FGM, an abuse that has been performed on more than 200 million innocent girls around the globe, with 200,000 survivors like Khadija living in Australia. FGM is a brutal form of gender-based violence performed in many different environments, sometimes even disguised as a medical procedure in more affluent countries with the intent of controlling the sexuality of women. Khadija is cutting open the shroud of silence FGM has hidden behind and is refusing to remain quiet.
An Ambassador of Our Watch, Director of Sister Works, lead campaigner and voice against FGM in Australia for the last 19 years and with a TEDx talk watched by over 2 million people, Khadija is making serious waves, saving lives and making a difference. She is the co-founder of The Desert Flower Centre and foundation Australia, providing comprehensive gynaecological and urological reconstructive surgery and trauma-informed care for women impacted by female genital mutilation. She provides advocacy, training, speaking on domestic and family violence, child protection, racism, human rights, refugees and cultural diversity through her cultural consultancy.

I painted Khadija wearing white traditional African dress. The garment symbolises Khadija’s deep connection with her culture while the intricate delicacy of the lace pays homage to the beauty of her homeland.

Together, Khadija and I discussed the difference between a cultural act, and a patriarchal act as we visited the pain of her mutilation. Khadija asserted that the ownership of this brutality is not on her culture, but on those who wielded the power. Own those with a desire to control others. On those that believed they held a authority on purity despite their heinous actions. On those that would not protect the little girls.

The detail of the lace work is indicative of the complexity of Khadija’s journey. The white represents the concept purity, virginity and innocence but also, hope. The optical illusion is that the white you see with your eyes is not pure white. It is a mixture of, blue, grey and even yellow.

As such the painting reminds us that often the purity of what appears, is in fact, not pure at all. 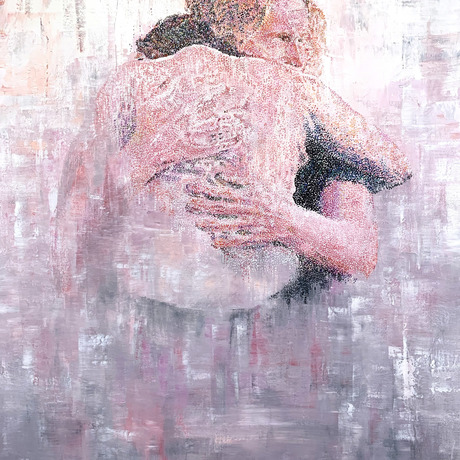 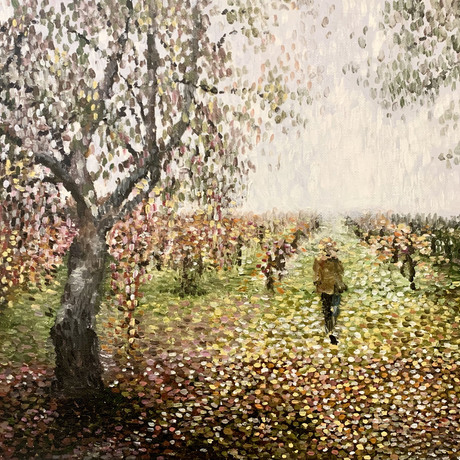