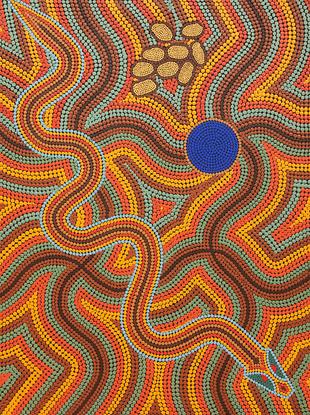 This is a story of Wati Kutjara Wanampi (two male water serpents) - a father and son - who are living at a waterhole. According to the story, Anangu tjuta (lots of people) went to that rockhole for the kapi (water), which is said to taste sweet. This upset the father and he told them to go back to their own country. Once the people left, the father and son travelled to Willuna, where they camped for weeks. They then return to Pukara. One day they were sleeping, but were awoken by a loud buzzing sound. The Minyma Punpunpa (the female flies) had been attracted to the honey grevillea plants found near the waterhole. It prompted the father and son to get up and go to collect the honey from the plants. It is there that the Wati Mututa (male black ants) appeared. They speared the son in his side. When the son started vomiting, he produced the seeds of all the different varieties of honey grevillea plants that are still found there today. They include kaliny-kalinypa, ultukunpa, piruwa and witjinti.