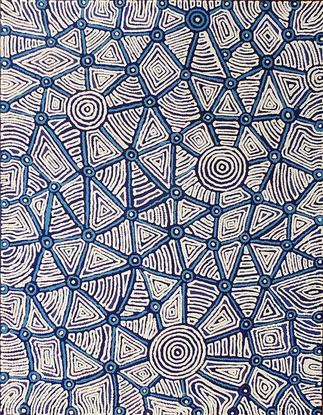 This Dreaming belongs to Warlukurlangu country to the south-west of Yuendumu, for which Jampijinpa/Jangala men and Nampijinpa/Nangala women have custodial responsibility. An old man ‘lungkarda’ (centralian blue- tongued lizard [Tiliqua multifasciata]), of the Jampijinpa skin group, lived on a hill with his two Jangala sons. The old man would feign blindness and send the two boys hunting in search of meat. While they were gone he would hunt and eat anything that he caught before they returned. One day the sons returned with a kangaroo that they had caught after much tracking. Unfortunately the kangaroo was sacred to the ‘lungkarda’, unbeknown to the boys. In his anger the old man decided to punish his sons and the next time they went out, he put his fire stick to the ground and sent a huge bush fire after them which chased them for many miles, at times propelling them through the air. Although the boys beat out the flames, ‘lungkarda's’ special magic kept the fire alive and it re-appeared out of his blue-tongued lizard hole. Exhausted the boys were finally overcome by the flames. In contemporary Warlpiri paintings traditional iconography is used to represent the Jukurrpa, particular sites and other elements. Usually sites that are depicted in paintings of this Jukurrpa include Warlukurlangu (a men's cave), Kirrkirrmanu (where the sacred kangaroo was killed), Wayililinypa (where the fire killed the two Jangala sons) and Marnimarnu (a water soakage) where the two Jangalas camped.

This painting needs to be framed or stretched. It’s also being sent direct from the artist at a remote art centre, Warlukurlangu Artists, in the remote community of Yuendumu, NT. Please note there is only one mail plane a week that takes the artwork to Alice Springs. The tracking information is then received a week later when the mail plane returns so often the painting are delivered before we receive the tracking information. Please expect a slightly longer wait for this very special artwork to arrive.