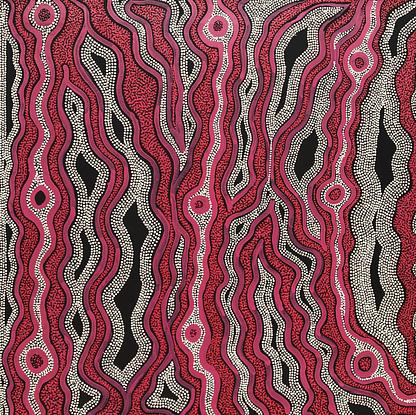 This is a story about Wati Ngintaka Tjukurpa (perentie lizard man creation story). That Wati Ngintaka (lizard man) heard the clapping sound of a beautiful grinding stone - a traditional tool used for grinding mai (food). He wanted that stone for himself, so he travelled from Arang’nga a long way east towards Wayatina, looking for the stone. He spotted Anangu tjuta (lots of Aboriginal people) at a camp. Some of the people gave him mai (food) in the form of a seed cake, but it was dry and he didn’t like it. Then one lady gave him delicious food and he knew that it had been made with seeds ground on the special grinding stone. He spied the grinding stone and stole it, hiding it in under his tail. When they all went hunting the next day, Wati Ngintaka stayed in camp, saying he had sore feet. Once they were gone, it was safe and he left, stealing the grinding stone. All the people were angry with the Wati Ngintaka and chased him. When they caught him they felt all over his body to see where he was hiding the grinding stone, but couldn’t find it. Wati Ngintaka held up his arms and claimed he didn’t have it, but they saw he was hiding it, wipungka (in his tail). They speared the Wati Ngintaka and retrieved the grinding stone. He passed away at a place called Aran’nga in the Northern Territory. Ngaltutjara (poor thing).

“bluethumb, where artists are born!”

“Love browsing through the offerings! Very happy with y h ”

“Wonderful art for all tastes without hassle and guaranteed.”

“Bluethumb is a highly professional, accessible, easy to use art gallery bringing together artists and collectors”

“EGALITARIAN, HELPFUL AND EGALITARIAN AND SUPPORTIVE. A BREAKTHROUGH IN THE FOSTERING OF ART PRACTICE IN AUSTRALIA. ”