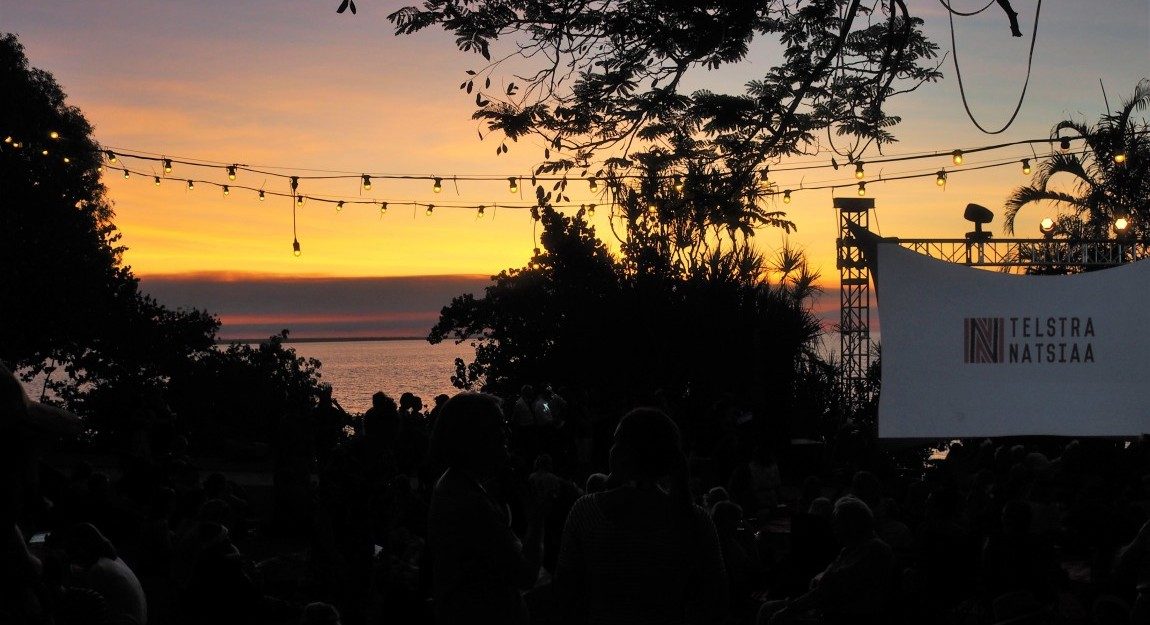 Darwin, or the Arafura Pearl as it’s affectionately know to locals thanks to the famous Mills Family song, is a multicultural paradise at the worst of times, but during the Darwin Festival there really is nowhere that compares in terms of being open and welcoming to all. “If you haven’t been to Darwin before,” says Larrakia Elder June Mills, “well, what can I say… you might never leave.” June is a Traditional Owner of Larrakia land, the country on which Darwin is built and the surrounding area, so gave the Welcome to Country at the Telstra National Aboriginal and Torres Strait Islander Art Awards (NATSIAA) ceremony last Friday night. June Mills gave a moving Welcome to Country at the NATSIAA, in memory of her late father David Mills

Best known as a singer songwriter, June recorded her debut album, I’ll Be The One, in 2005 and was awarded Female Musician of the Year at the Indigenous Music Awards. She is an accomplished visual artist known for her paintings and public art projects so the perfect person to kick off the night’s festivities (June is also a judge for this year’s bluethumb Art Prize). Her mother, Kathy Mills, wrote the previously mentioned song, Arafura Pearl, which has become Darwin’s anthem and June performed on the night. Unfortunately 80 year old Kathy couldn’t make it to the awards explains June. “We sung her song and I think she’ll be happy with that but she would extend a welcome too.”

Feeling welcomed and at home, the ceremony commenced with mesmerising performances by East Journey, Excelsior, Djakapurra Munyarryun, Shellie Morris, Moonfish Productions and Jinnawi Dance Clan. The awards are popularly known as the Telstra Awards as Telstra has sponsored the event for the last 25 years. This anniversary awards ceremony was obviously pulling out all the stops. 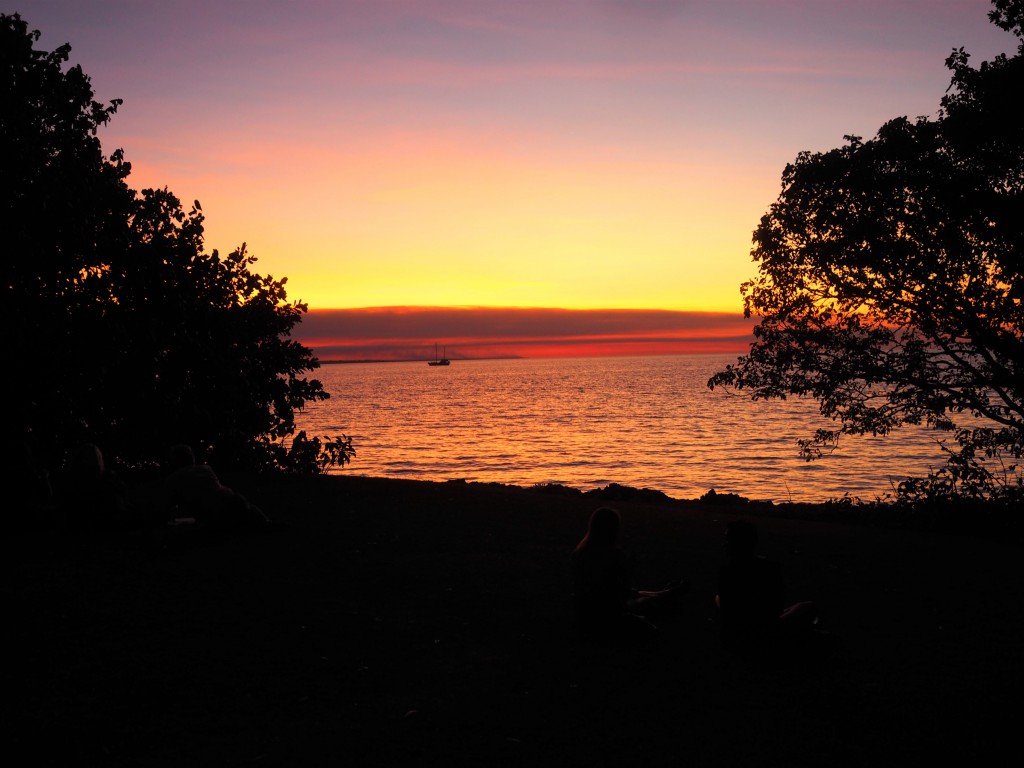 With the backdrop of arguably the most stunning sunset in Australia, despite the relaxed vibe, the excitement in the air was palpable. There are five category prizes each winning $5,000 along with the overall winner who takes home $50,000. The judging panel changes every year and this year’s panel of three has contemporary artist Vernon Ah Kee, artist and philanthropist Don Whyte and senior curator of South Eastern Australia Aboriginal Collections, Museum Victoria, Kimberley Moulton making the tough decisions. Before we knew it, the prizes were being announced. First up was the Telstra Works on Paper Award won by Robert T Pau for Battle of Bikar. “It evokes classical war painting, depicting a central staged battle filled with a vista of busy action,” say the judging panel. “It is a work of strength, power and fighting for Country.”

Finally the moment we had all be waiting for… “The winner… of the 33rd Telstra National Aboriginal and Torres Strait Art Award… is… Harold Joseph Thomas Bundoo.”

“I’m just overwhelmed and honoured to receive such a prestigious award, which shows the excellence of artists and craftspeople throughout Aboriginal and Torres Strait Australia,” says Thomas. A Darwin local and descendant of the Luritja and Wambai peoples of Central Australia, he is most well known for designing the iconic Aboriginal flag. His winning work, Tribal Abduction, shows the heartbreaking scene of the destruction of an Aboriginal family. “It’s a setting in outback of Australia emphasising the human form entwined to tell the story of pathos and drama, especially the abduction of children from their tribal family,” says the artist. The judges agree the painting is a powerful scene and masterfully executed. “The potency of the subject matter coupled with Thomas’ practiced hand and classical composition make the work a compelling choice this year.” The winning artworks along with all the finalists are currently on display at at the Telstra NATSIAA exhibition. One of our favourites in the exhibition is Penny Evans’ intricate ceramic and echidna quills work, Trophy Wife. “Made of earthenware clay, this wall piece speaks about Aboriginal women and women generally, in regards to domestic violence,” says the artist. “She speaks of black women being taken forcibly by white men on the frontiers, their subsequent domestic slavery and martyrdom.” An added bonus of being in town for the awards is the Darwin Aboriginal Art Fair runs concurrently. After an evening of outstanding art and achievement, the next day you can head down to the stunning waterfront convention centre to have your mind blown by art from every corner of Australia. If you’re lucky, you can even meet some of the NATSIAA finalists. At Waralungku Arts Centre’s stand we met Stewart Hoosan from Borroloola. 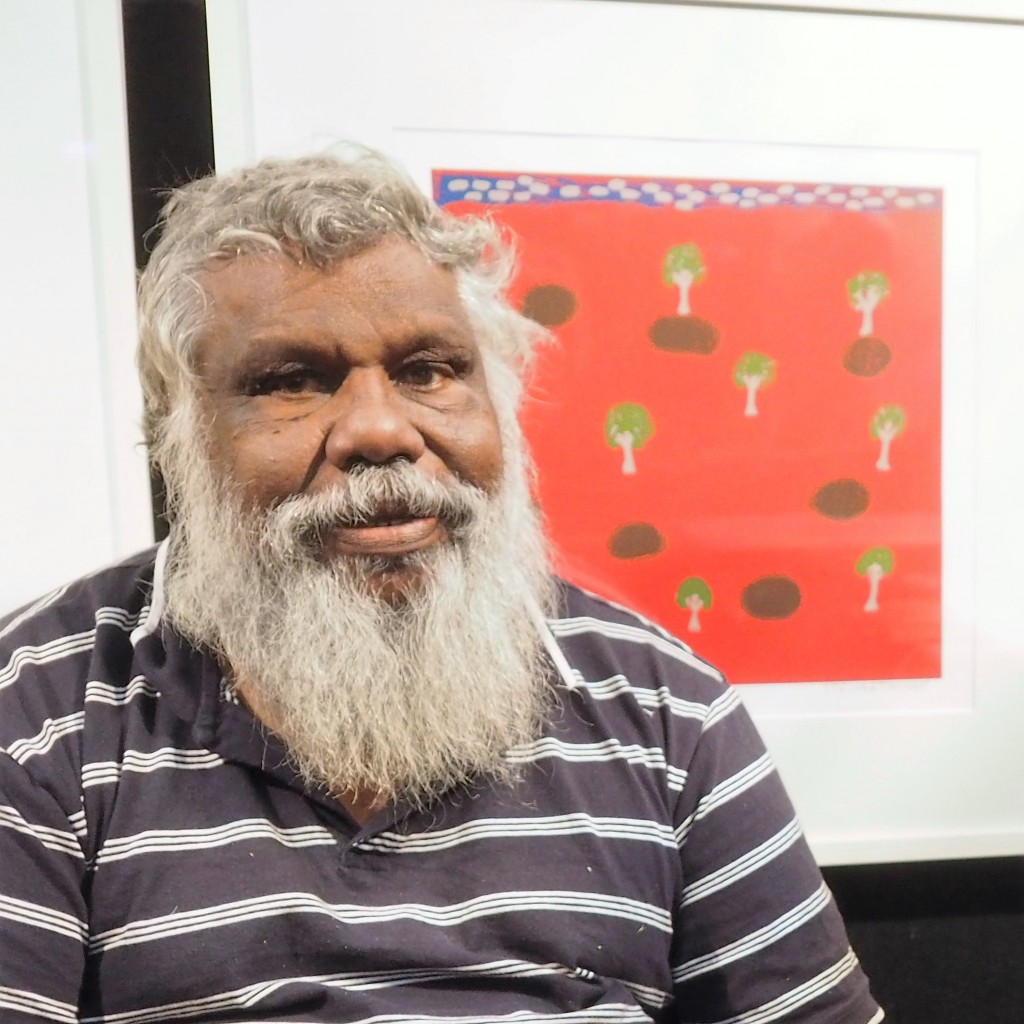 His NATSIAA finalist painting (below), Yarriyarri or ‘Long George’ tells the story of a Garrwa Traditional Owner of the Calvert Hills area in the Gulf of Carpentaria. “Long George wanted to drive the owner of Calvert Hills Station, Joe Clark, off his country while Joe wanted retribution for the cattle George had killed to feed his family,” Hoosan explains. “One day, to give Joe a fright, George speared him through his hat.” The Telstra National Aboriginal and Torres Strait Islander Art Award exhibition is now on at the Museum and Art Gallery of the Northern Territory. If you live up north or are heading that way in the coming months, the exhibition is a must and the best place to get a feel for the contemporary Aboriginal art scene. You may also leave with a heavy heart as Darwin and the NT have a way getting in your soul and feeling like home. In the words of Larrakia Elder and Traditional Owner, Kathy Mills, “She’s a multiracial beauty, she’s an adolescent girl, she’s the jewell of Australia, she’s the Arafura Pearl.” We will be back next year!

Buy Aboriginal paintings for sale direct from artists and art centres on bluethumb.

What Makes an Artist: Katerina Apale’s brush is a continuation of her hand