France has historically been crowned the birthplace of art movements, as Fauvism attests. The Fauves, meaning ‘wild beasts’ in French, may have only hit the peak of their stride for a few years, yet their contribution to art left a long-lasting legacy that artists continue to be influenced by today. Henri Matisse’s Le Bonheur de Vivre, or Joy of Life, is regarded as an exemplary piece of Fauvism and of early Modernism.

The Birth of Fauvism

Following the trailblazers of Impressionism, the Fauves also painted directly from nature. The key difference between these two styles was all about intention. Whereas Impressionism was concerned with capturing the fleeting moment, the Fauves largely focussed on strong expressive reactions to their subject matter.

As the first Fauvist paintings were on exhibition in 1905, viewers were left shocked by the intense, brilliant colour use and ‘aggressive’ application of paint to canvas. Henri Matisse and André Derain were two painters leading this new, unchartered territory, and upon seeing their work, influential art critic Louis Vauxcelles dubbed the artists Les Fauves. 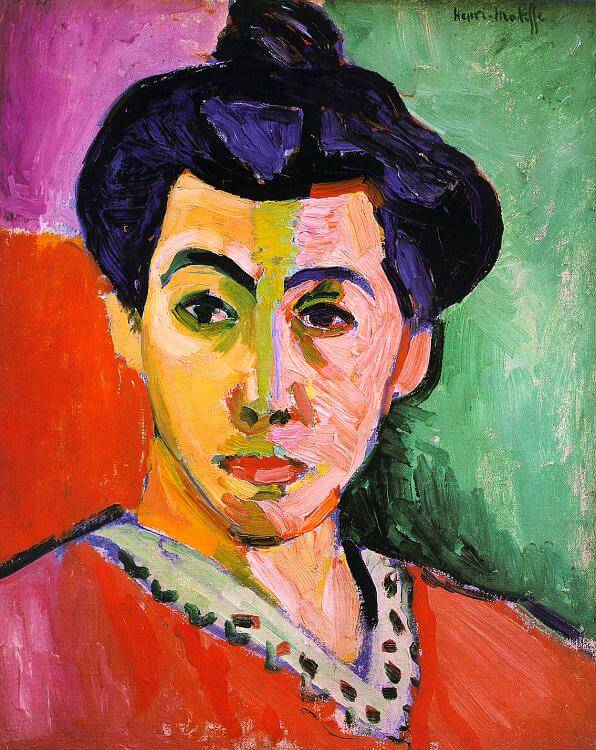 The Green Stripe down the centre of Amélie Matisse’s face acts as a shadow line. The brush technique combined with the contrast of artificial and natural light altogether create a sense of drama to the portrait.

Once familiar with the characteristics of Fauvist paintings, it becomes quick business distinguishing artworks influenced by the movement. A saturated colour palette with thick brushstrokes, simplified – often lightly abstract – forms and wild, unpredictable dabs of paint are all commonplace in Fauvism. Andrew J Pearson utilises the spirit of fauvism in his depiction of the Australian landscape. Featured: Warm Landscape 1

Alongside new realms of creative expression within the art world, the nineteenth century saw heavy advancements in scientific colour theories. Fauvism explored these with keen interest, particularly theories concerning the use of complementary colours. Complementary colours refer to colours that sit opposite each other on the colour wheel. When used together, the strong contrast creates an illusion of brightness. The painting below by Bluethumb artist D.M. Ross shows complementary colours, such as blue and orange, sitting together, as well as striking brush technique. The Melbourne suburb Carlton receives a Fauvist spin in this landscape by D.M. Ross.

Fauvism, Then and Now

Fauvism lasted over a five year timespan, making it a short-lived movement. However, if we look at the movements and events that followed, we could say that Fauvism was a catalyst of abstraction, as Matisse and other Fauvists began to reject three-dimensional shapes and turn towards simplified, flat forms. Similarly, the intense colours and impulsive brushwork are parallel to the features of Expressionism. The Road by Amanda Cutlack uses thick brushstrokes and a limited colour palette to create simultaneously subtle and strong contrasts.

So what happened to Les Fauves? The Fauvist approach gave its artists room to transition into other artistic styles. French painter George Braque’s quick shift from Impressionism to Fauvism later became the building blocks for his development of Cubism with Pablo Picasso. André Derain, one of the principal Fauvists, began to explore a more neutral palette after finding inspiration in Paul Cézanne’s Post-Impressionist landscapes. Nevertheless, Henri Matisse continued to use a vibrant colour palette throughout the rest of his career, employing simplified shapes, emotive mark-making and other distinctive Fauvist traits until his last days. Matisse and his assistant during his last body of work, The Cut Outs. These went on to inspire many contemporary artists, such as O. HIISI, Chris Cox and Angus Martin.

A Contribution to Contemporary Art

Just as Matisse himself kept an unwavering love of colour and form through the evolution of his artistic style, many artists today employ the techniques of Fauvism in their own work. In doing so, a piece becomes more distinct, or easier to digest. Click here to find more artworks inspired by Fauvism in our recent curation.