Hosted by the Museum and Art Gallery of the Northern Territory, the NATSIAA awards recognise the contribution of Indigenous artists from regional and urban areas throughout Australia working in traditional and contemporary media. It is a highly prestigious art prize and one of the key events on the Australian Indigenous art calendar. The winning artists and their artwork. Image courtesy of the Museum and Art Gallery of the Northern Territory.

The winning artwork tells the story of ‘Anangu (Central Australian Aborigines)’. The artists note that they were spurred to create the piece because “We see many young men from remote communities becoming stuck in a cycle of reoffending and being locked up in juvenile detention centres, like Magill and Don Dale. We are concerned the whitefella way of locking people up isn’t working.” One of the artists, Frank Young, believes that these young men should be brought back to the country to work with senior men, helping to look after families and communities instead. In addition to the overall prize, six awards are given out for specific mediums or categories, such as works on paper or the recent addition of the Telstra Emerging Artist award.

The quality of the competition is extremely high, and this year Bluethumb is thrilled to have had three artists qualify as finalists for the awards: Billy Atkins Yunkurra from Martumili Artists, Roland Burranali from Injalak Arts and Hubert Pareroultja, from Iltja Ntjarra ‘Many Hands’ Art Centre.

Their Bluethumb membership follows our recent partnership with a growing community of remote Indigenous art centres. Bluethumb finalist Billy Yunkurra Atkins, is a senior Martu man, highly knowledgable about important Martu places, and has been working as an independent artist since the early 2000s. He continues to participate in high-profile art projects and group exhibitions and has also been instrumental in the establishment of art centre Martumili Artists. This is his second nomination as a Telstra finalist. We were lucky enough to chat with Billy Atkins Yunkurra at the opening. Here he is infront of his finalist work at the Museum and Art Gallery of the Northern Territory.

Specifically, it shows a large salt lake or warla, which is one of the most sacred and dangerous sites in the far Western Desert. Ngayurnangalku (cannibal beings) live beneath the lake and sometimes surface to feed on human flesh.

“This one the mummy Ngayurnangalku (cannibal), big mummy, and all those little babies [are] his,” says Yunkurra of his painting. “All the man, women’s, little kids, they all stopping there. That’s his [their] Country, Kumpupirntily [Lake Disappointment]. You can see the big hole there [central circular forms], this one the Ngayurnangalku camp. Don’t go, keep away!”

Bluethumb finalist Roland Barrunali is the Djungkayi (ritual manager) for Namorrordo, the devil-like spirit man. In addition to being a talented artist, Roland is also highly knowledgable about the local area and shares his knowledge of its rock art with tourists from all around Australia and the world. He is also a member of the Injalak Arts Management Committee.

Roland’s entry into the Telstra awards was painted onto bark using ochre. It depicts the story of an orphan boy called Namarladj, who lived in a country called Kabbari, among a large community. Namarladj craved the sweet, pumpkin-like root of the yarrldjarrdj plant so much that he was not satisfied by anything else that was brought to him, and cried unceasingly day and night. Eventually, his crying awoke Ngalyod, the Rainbow Serpent, who rose and came all the way from the distant island where he was sleeping. Ngalyod was so angry that he ate and killed all the people gathered at the camp as they were preparing for a ceremony, including Namarladj, the orphan boy. 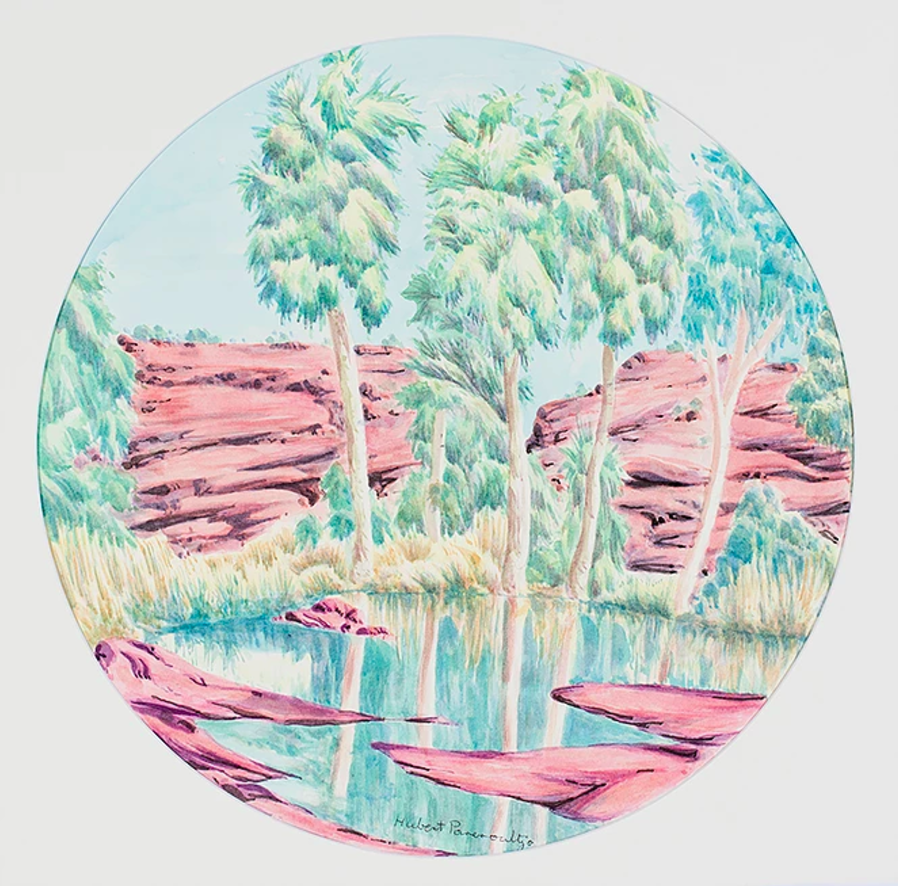 Bluethumb finalist Hubert Pareroultja is a senior Western Arrarnta-Luritja man who lives at Kulpitharra / Lundara outstation west of Hermannsburg (Ntaria). He has been painting watercolours for most of his life, following his father, uncles and famous artist Albert Namatjira in the original Hermannsburg School watercolour movement.

Hubert paints many of the same locations that Namatjira and the Pareroultja brothers painted. In particular, Hermannsburg, Mt Sonder and James Range. Hubert lives and works in the Western MacDonnell Ranges to this day. His work is displayed in many important collections.

The exhibition opened tonight, and will remain open until the 26th of November.

Video Interview: The Op Art of Will Dickerson