The Art of Love: Gillie and Marc Schattner

Romance Awareness Month is at an end, so we’re going out with a bang! So far we have explored tragic, complicated and innocent love in art – now, here’s a real life example.

The love between artist couple Gillie and Marc Schattner seems to slide along like the skillful brush strokes of an experienced painter, or a pair of rollerblades cruising along the sidewalk dodging pebbles and discarded cigarette butts.  A love which may hit some bumps and artistic brain blocks along the way, yet still allows their relationship to flourish – and like a fine wine get better with age.

The world famous, contemporary artist duo have been collaborating for years and have two children together as well as their fur baby, a gorgeous Weimaraner named Indie. 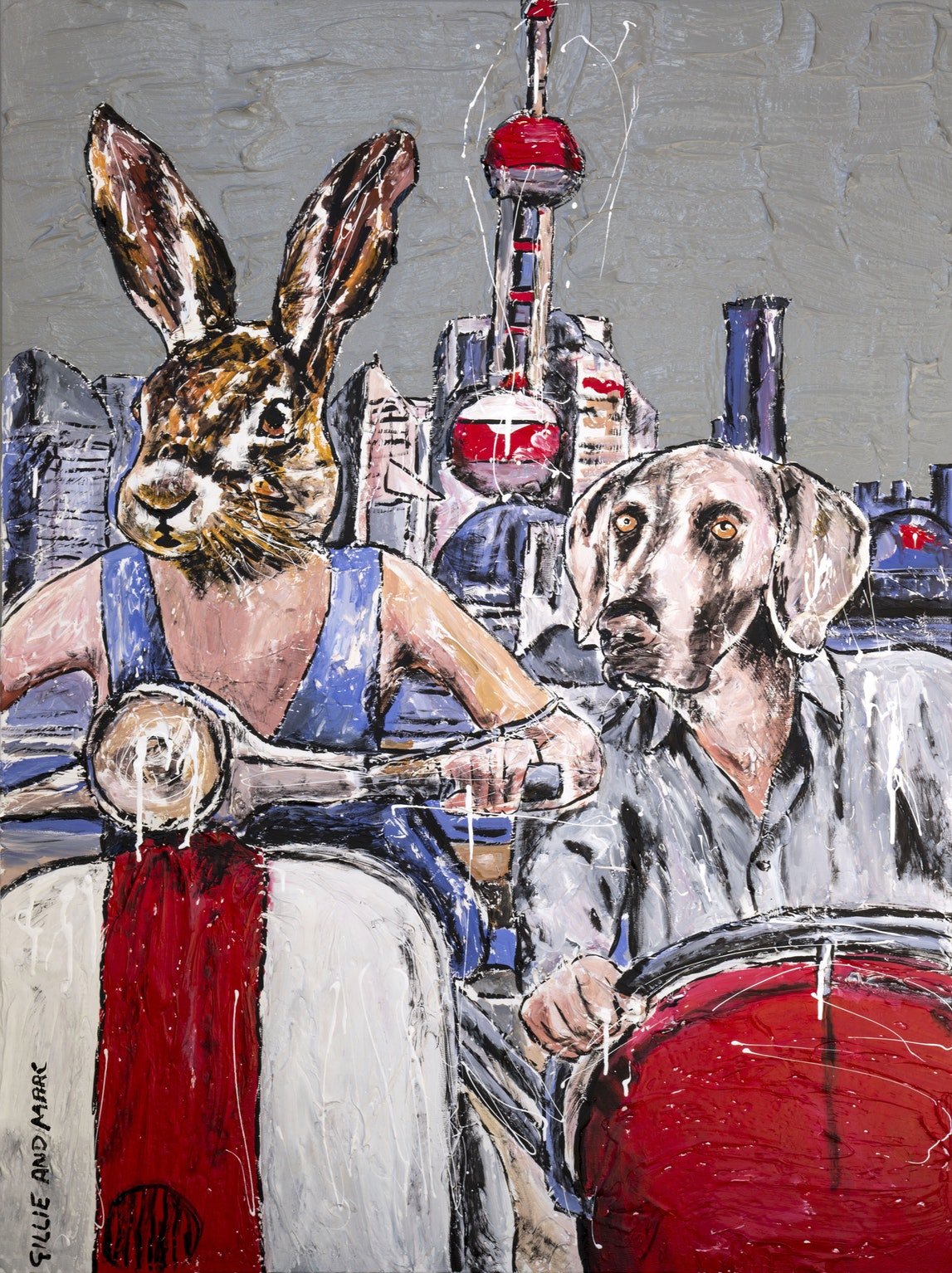 The scenes depicted in their paintings show the adventures Gillie and Marc have shared around the world. They Always Ride Together in Shanghai, by Gillie and Marc Schattner.

On paper – or should we say canvas – the couple could not be more different from one another. However, in life it seems they were destined to be together.

“We first met in Hong Kong. I was a nurse from England and Marc was a boy from the ‘burbs of Melbourne,” Gillie says.

“Even though we were both engaged to other people, we instantly realised we were soulmates.

“Seven days later we were married in the foothills of Mount Everest.”

The pair, who recently celebrated their 25th wedding anniversary, portray their undying love for one another in their artworks featuring their iconic characters Dogman and Rabbitgirl. Gillie and Marc travelled to Kenya as part of their campaign Goodbye Rhinos.

Marc says the idea behind these characters occurred while on a family holiday in Egypt. They were inspired by the ancient Egyptian art practice of Theriocephaly, where the head of an animal is put on the body of a human or deity.

“It was believed the human would evoke the qualities of the animal,” Marc says.

“Whenever we were down we would look to our dog, whose unconditional love and happiness is so infectious.

“In the wild, dogs hunt and kill rabbits, but in this world the rules are discarded and new possibilities open up.”

Dogman and Rabbitgirl can be found in over 500 public collections and museums across the globe including Australia, New York, Shanghai, London and Paris. The couple are “best friends and team mates as well as husband and wife”. She Loved Him More than She Thought Was Possible by Gillie and Marc Schattner.

If their paintings and sculptures are anything to go by, the couple seem to have an idyllic relationship. However Gillie assures us they do disagree from time to time – just like most couples.

“It would not be normal if we didn’t – but we are always headed in the same direction and although we argue over which way the map is pointed we arrive together and very much in love,” Gillie says. So, you might be wondering the secret for a long and happy relationship. The artistic duo says it’s actually simpler than you might think.

“The truth is we are best friends and team mates as well as husband and wife,” Marc says.

“All our success is because everything is a combined effort – when we win, we win together and when we fail, we fail together,” Gillie says.

“And then there is the very simple answer, we love each other and love conquers all. Enough said.”

The couple’s love extends beyond themselves and their family; they are also keen conservationists. They are currently working on a project called Goodbye Rhinos to help protect the Northern White Rhinos. They are donating 10 per cent of profits from all their wildlife artworks directly to the conservancy.