Bluethumb Finalists in the 2017 Archibald and Sulman Prizes

Breaking news! This morning saw the announcement of the Archibald, Sulman & Wynn art prizes at the Art Gallery of New South Wales, and we were thrilled to see that two of our artists had made the cut.

Loribelle Spirovski and Kim Leutwyler are both finalists in the Archibald Prize, and, incredibly, Kim is also a finalist in the Sulman Prize. Both artists have previously exhibited in prestigious national prizes, such as the Portia Geach memorial prize, and Kim was also an Archibald finalist in 2015.

“I honestly can’t believe it. When my partner asked what my favourite part about being in the Archibald and the Sulman is, I responded that it will be seeing the paintings hanging on the wall,” Kim says.

“I’ve experienced very few things more surreal than turning the corner and seeing my 2015 finalist entry hanging on the walls of the Art Gallery of NSW.”

Her work largely focuses on LGBTQI+ identified and Queer-allied women, with this year’s entry for the Archibald Prize a portrait of Australian Olympic soccer player, Michelle Heyman. Kim’s Archibald entry. Soccer player Michelle Heyman was the only openly gay athlete to represent Australia in the 2016 Olympics.

“I approached Michelle after we’d both appeared on the LOTL Powerlist and Cosmo Rainbow List, each of which celebrated the most influential and inspiring LGBTQI+ and allied Australians,” Kim says.

“As a striker for the Matildas and Canberra United, Michelle is one of Australia’s most impressive sportswomen.

“She is passionate about being a role model for kids and openly speaks out against bullying, encouraging young people to be their authentic selves.”

Kim’s painting of her partner Cole and their dog Sitges has also been selected as a finalist for the Sulman Prize, which is awarded for the best subject painting, genre painting or mural project. 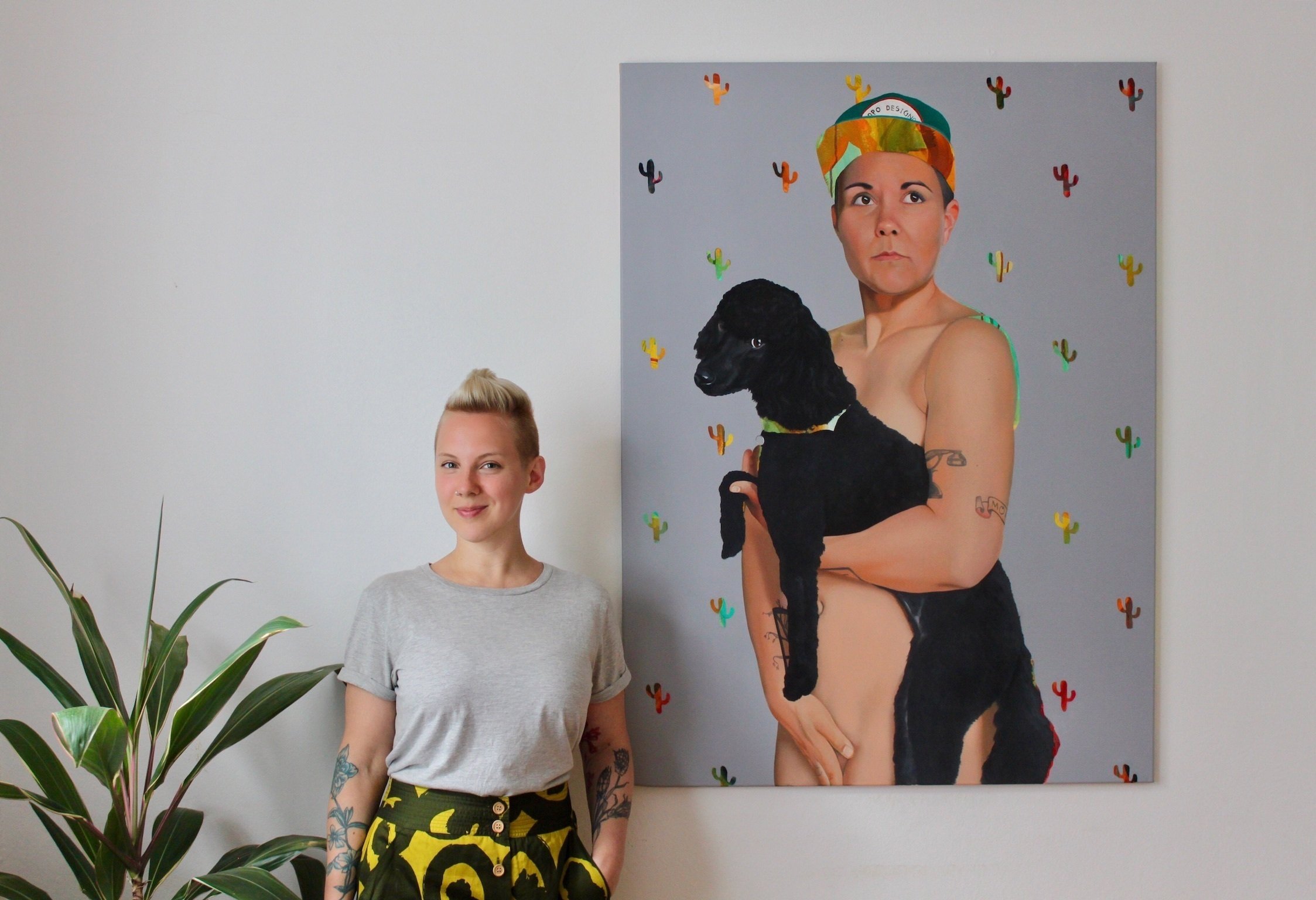 Kim with her Sulman Prize finalist painting The Boo and Baby Sitges.

She may schedule sittings for most of her work, however Kim says this portrait occurred spontaneously one day when Cole was dancing around the house naked.

“On this particular occasion she was two-stepping past my studio door – in our home – to a Willie Nelson tune.

“I asked her to stop so that I could snap a quick photo, and naturally Sitges wanted to make a cameo as well.”

In every piece Kim does, she says she tries to incorporate colours and designs to reflect her sitter.

“This pattern features Saguaro cacti which are native only to the Sonoran Desert in the American Southwest. Cole is Mexican American and grew up in Arizona.

“The image of this cactus is inextricably linked to her in my mind, and her favourite colour is ’t-shirt grey’.” Kim has big plans for the year ahead, and we can’t wait to see what she achieves next! “I have an amazing line up of inspiring women to paint this year such as Amrita Hepi, Faustina Agolly, Montaigne and Sally Rugg,” Kim says.

For Loribelle, this is her first time as a finalist in the prize. “It’s my fourth time trying for it, and it’s totally unexpected! The email just comes out of nowhere. I thought, I’ve tried so many times, this won’t go anywhere! It was just the most wonderful thing of being so recognised and validated.” “I knew of John before I painted him of course, and he’s just the most lovely guy. Simon, John and I were touring around Australia and he took us out not long ago for a lovely dinner in Adelaide.”

“I didn’t expect to get selected with a portrait of John, because he had already won in 2001, but as soon as I met him I felt so inspired, I was compelled to paint him.”

Incredibly, it only took Loribelle a single sitting of three hours to complete the painting after sketching John throughout his rehearsals with her partner.

“I just decided to be sort of instinctive about it. John’s face is very distinctive, so you only need a few lines to capture it. As soon as you get the cheekbones and the side of the face you know it’s John Bell. I felt I didn’t need to be laboured in painting him.”

Loribelle has already approached the subject of her portrait for next year, but for now she’s keeping mum. We’ll just have to wait and see!

Loribelle talks a little more about her entry in the video below – we wish all finalists and entrants into the prizes this year a huge congratulations, and the best of luck to our two Bluethumb artists!

How to Take Great Photos of Your Artwork