Llael McDonald’s art is filled with scenes of whimsy and wonder. More specifically, Llael draws upon stories and fairytales as a source of inspiration, bringing to life their tropes, characters and atmosphere within the natural beauty of Victoria’s landscape. Llael makes use of her old palettes as a quirky wall feature.

Llael’s delightful studio is nestled in amongst Victoria’s Wombat State Forest, in the centre of the state. It’s a stunning location, so little wonder that the surrounding area features in many of her paintings. Her studio itself, which she shares with a fellow painter, is like a small home away from home with cosy couches and vintage treasures. Most importantly for a studio, it has great natural light. Llael dries her paintings on the ladder up the top.

This comfortable space allows Llael’s imagination to wander. In previous works, she has drawn her inspiration from fairytales in literature, such as Grimm’s Fairy Tales and the novel Something Wicked This Way Comes. Llael’s scenes have an eery sensibility even if their imagery is not outwardly fantastical.

She’s interested in “anything that has strong imagery and a sort of high strangeness to it.” Soon she says, she will be returning to Alice in Wonderland themes, with a new series called Let Them Eat Cake. Even the walls are full of unique touches!

Primarily, Llael works in oil paints on linen, however in the past she has explored watercolour, acrylic, pencil, pastel and even photography, among other mediums. Llael chooses oils for the intensity of their colours and the ability to manipulate it over longer periods of time. She particularly prefers the locally-sourced Langridge paints for their high pigment levels, which allow for especially vivid colours. Recently, she’s been favouring a specific colour called ‘Nickel Azo Red Gold’. Llael has started to feature jars of honey in some of her work, and “Nickel Azo Red Gold makes a wonderful honey colour.” The oil paints also lend themselves well to capturing various moods of light, which really change how a scene is perceived. Llael loves exploring different kinds of light, especially “evening and dawn light. The colours and mood are so different – much more moody, and you can create a much more intriguing narrative in those sorts of light.” 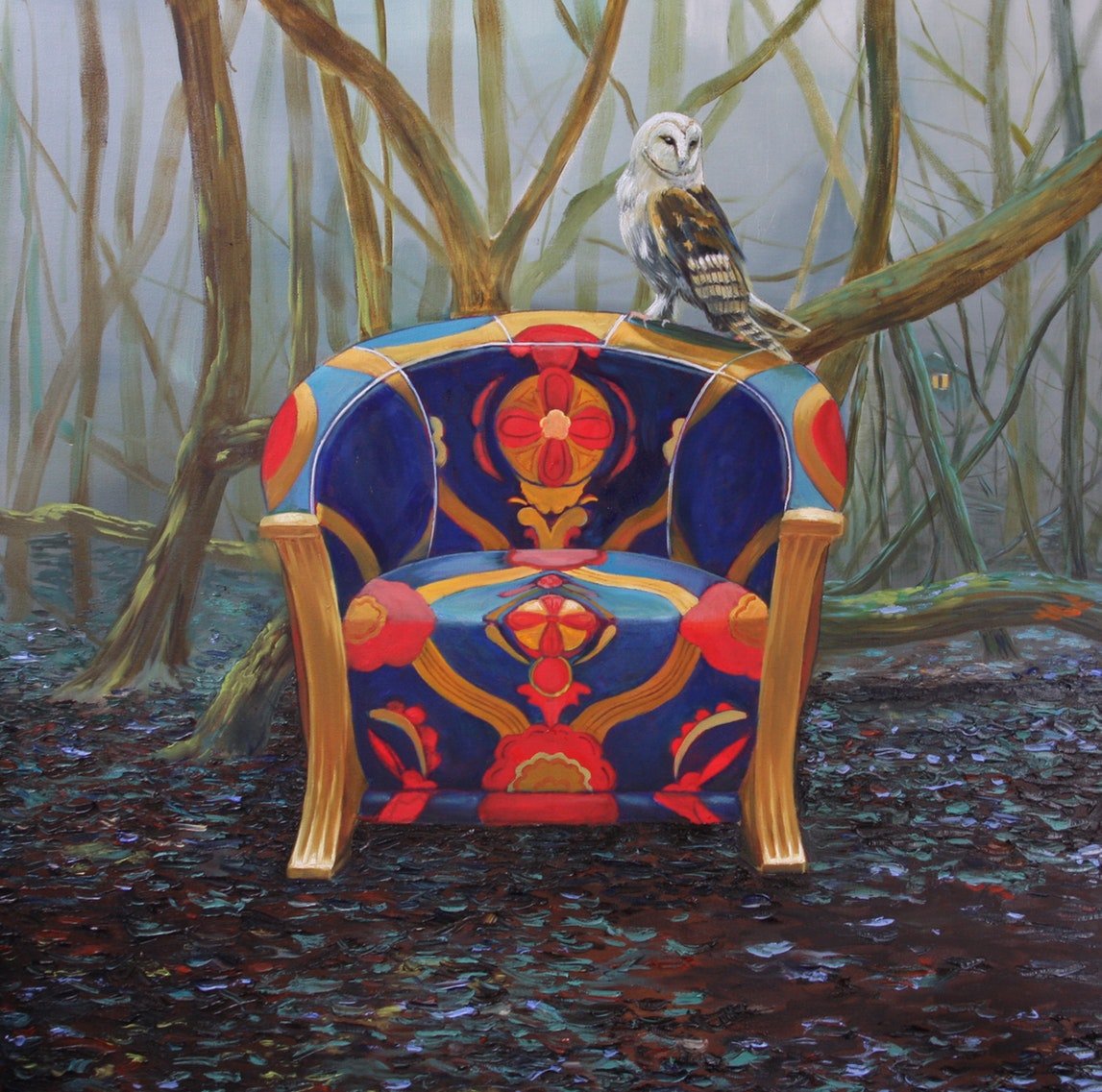 “Artists are always evolving. If I look at a painting I did a couple of years back, I am always surprised how I’ve grown in terms of my subject matter and technical skills.” While working within her own style, it’s important to Llael to continue to explore new avenues. Llael works on all kinds of mediums – including old music sheets!

Over the past year, Llael has been trying to soften her colour palette, and avoid some of the more ‘overly bright’ colours she has used in the past. However, Llael also recognises that bright colours are sometimes called for, and isn’t planning to limit herself to any one colour palette. The teapot is a lovely touch!

It is the freedom to have creative control over her projects that Llael loves most about life as an artist. She says that having the final say over all of the decisions in her creative process is liberating. While, in her words, “an independent creative career is not an easy one,” it is the career that suits her best. 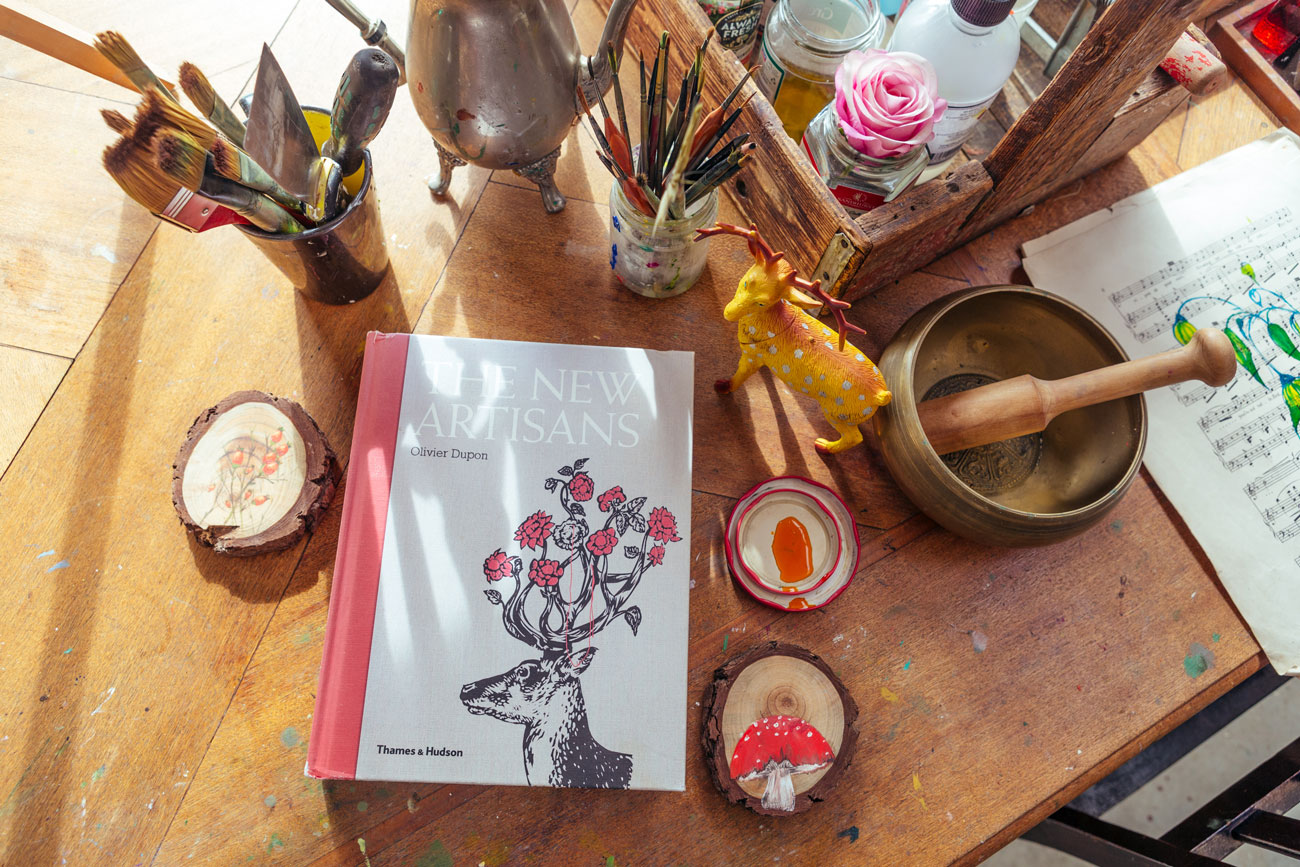 The studio is full of quirky flourishes.

Llael came to Bluethumb nearly 4 years ago, and says that the site has been a great experience. “I’ve been given countless opportunities to be promoted [outside of Bluethumb] because of my presence on the site.” These include a feature in an art magazine and being a finalist in last year’s Bluethumb Art Prize. “It was an honour to be a finalist in the Bluethumb Art Prize,” says Llael. “It was a real confidence boost, I was amongst great company and the work was of a very high standard.” Going forward, Llael will be working on her new series Let Them Eat Cake and entering into next year’s Sulman Prize. She’s also hoping to find a space to exhibit her work, so that she can share her fairytale wonders with the world. One thing’s for certain: she won’t stop working hard. As she puts it, “Art is something I’ll be doing until I draw my last breath”

You can find Llael’s art on her Bluethumb profile here.

An Evening at the ANL Mission to Seafarers Maritime Art Prize