James Robertson’s art career began when a friend of his asked him to paint something for an empty wall in their house. From there, the pieces fell into place. “It was like I’d been doing it all my life,” he explains, “the first thing I painted was a sky, and I’ve been doing skies ever since.” Up until this life-changing moment, he had been working as a design engineer. When he was retrenched, he took the situation as a sign and transitioned to painting full-time. In the beginning, James began by painting abstracts, in order to get a sense of colour. Later, he was inspired by legendary photographer Ansel Adams to paint landscapes. Even then, he still felt that his landscapes “needed something”, so he tried adding a human figure. “I just thought I’d put some characters in there and tell little stories.” After painting in this style for many years, James has recently returned to his abstracts. He finds that with these abstract cloudscapes he is able to “capture a bit more energy and movement”. 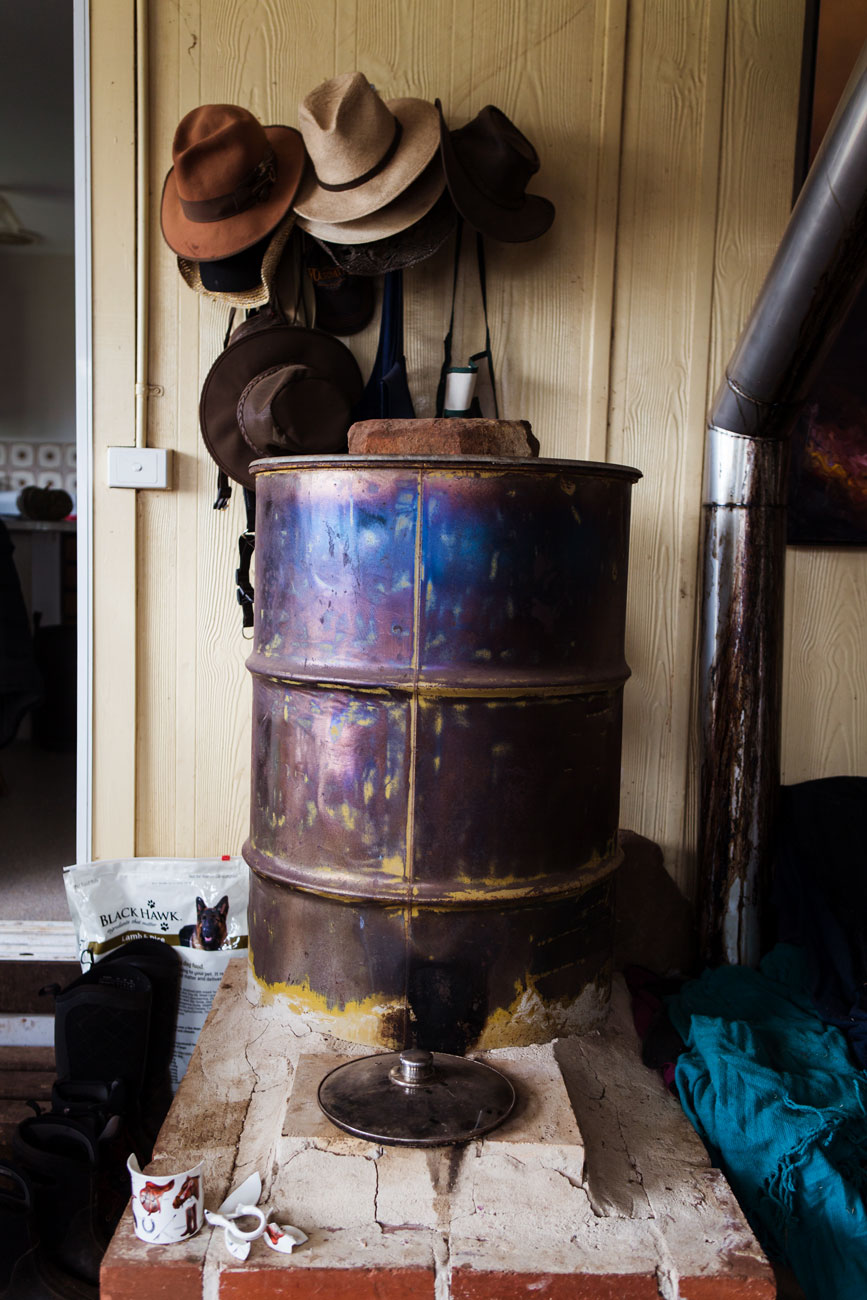 James’ country studio is full of rustic details like this heater.

Switching up styles has allowed James to become more adventurous. He is now trying colours and techniques he wasn’t able to with his landscapes;“it’s just a free way to paint,” he says. While James has kept the influence of nature in his works, through the use of clouds, he has eliminated the horizon so there is no longer a single ‘right way’ to view the paintings. James prefers to work in oil paints on his large-scale paintings.

James works in oil paints, a choice he has made for their impressive colour rendition. Earlier on in his career, he worked in acrylics, however he found himself frustrated with the process of building up the colours. Since then, he has “tried to go back to acrylics, but they still don’t perform like the oils do.” He still prefers the translucency of the oils.

For the next year, James hopes to really develop the nuances in his new style. He’s searching for more depth and different colour effects, and is always looking to express himself and his energy. Over the next few months, James hopes to explore his colour choices and create more depth.

James likes to see work that is entirely true to the artist; a complete expression of who they are. He elaborates, “what inspires me is seeing artists do what they want to do.” He is most inspired by people who chase different directions with their work, rather than letting themselves get boxed into a style they no longer enjoy simply because it sells. In his studio, James has a cosy chair with a great view of his finished pieces.

It’s this freedom to follow his own creative path that drew James to Bluethumb. In particular, he loves the ability to move between styles as he chooses: “It’s given me the freedom to do what I want and not have a gallery director say ‘can you do me one like this?’…it’s my work and my expression, and I can put up what I like.” James also appreciates how Bluethumb affords him access to a much larger audience than he could reach in a gallery, and on the other side, the fact that Bluethumb makes it easy for collectors to find great artists they love.

You can find James’ work on his Bluethumb profile, and check out the video of our visit to his country studio!