Mike Barr‘s artistic journey interestingly began in his youngest years drawing Sputniks, the first Russian satellite. Today, Mike is a bestselling artist on Bluethumb with an undisputed niche of rainy cityscapes – far far away from his first choice of subject matter. Having now sold over 150 artworks on Bluethumb alone and receiving numerous accolades, including giving a painting demonstration at Clarice Beckett’s recent exhibition at The Art Gallery of South Australia due to their similar styles and level of technical skill, his success as an artist is well worth a toast. 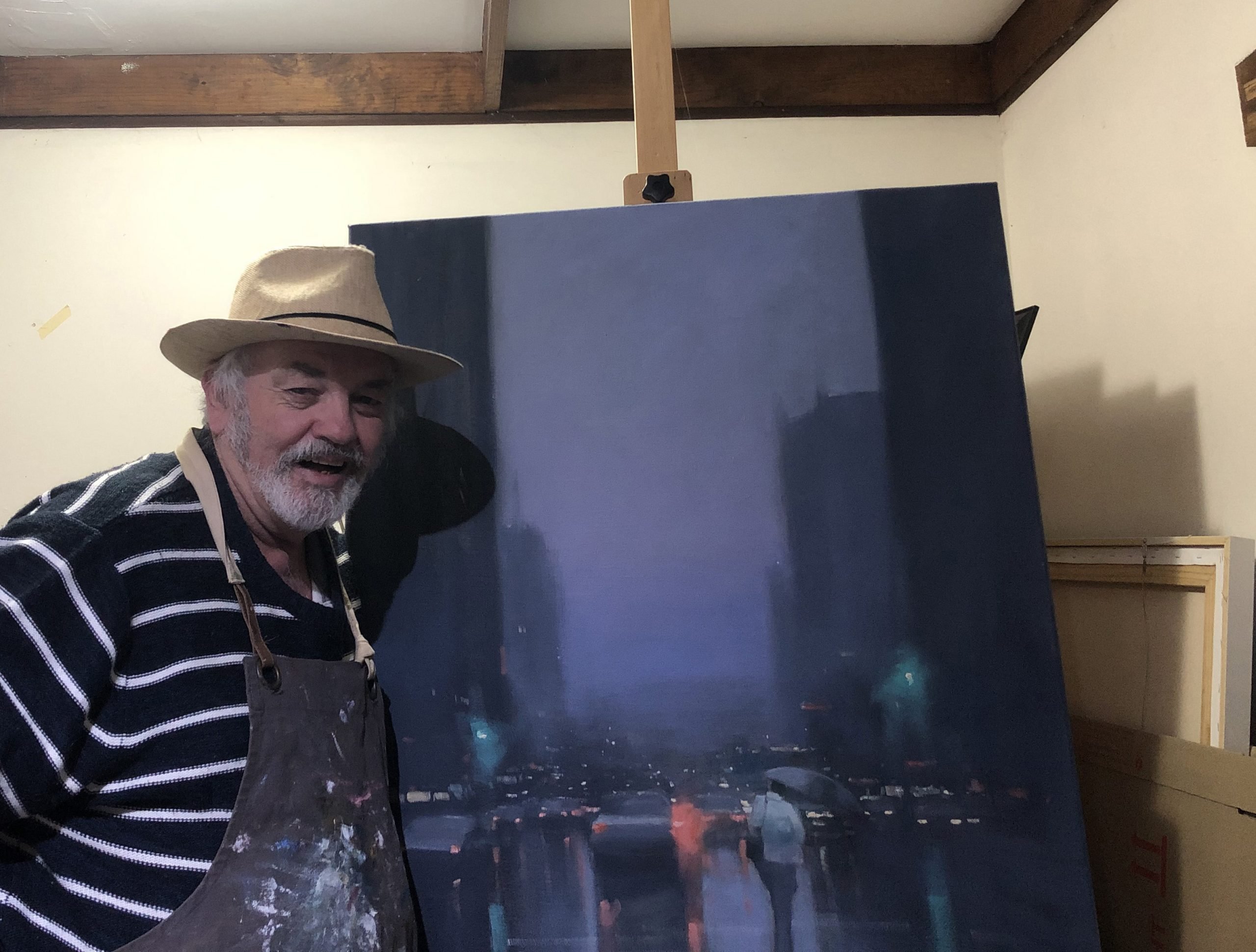 Mike Barr with one of his freshly finished, iconic rainy cityscapes.

“It really got going in about 2002 when I started selling on eBay,” Mike recalls. “In those days it was the real coalface of selling online and after my first sale I was up and running. It was a great training ground for me.”

Beachscapes, such as Shadows on Beach Noosa, became Mike Barr’s main subject for a number of years and have always remained slightly impressionistic. This somewhat reflected the work-life balance which dictated him to paint quickly.

Mike Barr remembers the single experience that started the love of painting his iconic rainy cityscapes. “[It] happened in about 2005 on a visit to the Adelaide Museum. It had been raining while we were in there and when we came out, the place was soaking. The beautiful North Terrace boulevard looked incredible with it’s reflective pavements – I had to paint it and I was hooked!

“Gradually the theme of rain took equal billing with my seascape work and at times the stormy sky makes successful appearances in my seascapes too. Painting mood has become important in my work and the weather has a lot to do with that. Rain adds that bit of drama to every-day life and especially so in the city.” Mike Barr has over the years observed his style to gradually get looser in form, which lends itself beautifully to rainy cityscapes. “They never look quite right if they are painted tightly or too brightly!” Featured: Lakeside Rain

Since his first sale on Bluethumb four years ago, Mike Barr has gone as far as to sell over 150 artworks. These paintings have taken the dramatic atmosphere of Melbourne to homes across Australia. “Especially Melbourne – the beautiful rainy capital of the world!” Mike jokes. “Overseas sales also crop up too, including the US, Germany, France, Norway, New Zealand and Japan. My works are rarely seen as décor works so they have to work particularly hard to attract attention, so I feel very honoured to have now hit the 165 mark.”

Similarly, many of Mike’s career highlights also involve exhibitions and prizes from both home territory and far-reaching places. Over the last twenty years, some of his most notable vary from solo exhibitions in Adelaide, to group exhibitions in the UK and the US. His first interstate show in 2009 led him to being discovered by Maree Coote – artist, publisher, Melbourne historian and owner of Melbourne Style. This encounter led to one of Mike’s most important milestones as he came to be featured in Coote’s book focussing on the history of Melbourne through the eyes of its artists. It saw his work paralleled with the likes of Jeffrey Smart, Clarice Beckett, Arthur Streeton and more. Mike produced six paintings at his painting demonstration for the Clarice Beckett exhibition earlier this year.

The comparable nature between Mike Barr and Clarice Beckett’s work continued in April this year, over a decade later. Mike notes the most honourable highlight of his career as the invitation by the Art Gallery of South Australia to do a demonstration session during the Clarice Beckett exhibition. “She is one of my favourite painters and walking around her exhibition was a very emotional experience that I will never forget. So, I am in the same book as her and painted at her exhibition – it is like being involved with painting royalty! The few hours spent at the demonstration I met quite a few fans that were previously unknown to me. I completed six demo pieces at the session with most selling on Bluethumb shortly afterwards.” One of Mike’s more recent pieces to date – and, with good reason, most popular – Flinders Lane in Rain.

With the  sporadic closures of physical galleries, cancellation of events and postponement of art fairs, the art world has, in many ways, taken a huge hit over the past year. Like many other creatives, Mike Barr had his doubts over what the future would hold for artists. However, collecting art has had a renaissance of some sort. “As we all know now, it was the beginning of a resurgence for art sales – and still is. Not only has it been for online sales but for physical galleries too. Artists, being in stuck at home is nothing new, so creativity didn’t miss a beat and I think a lot of artists are in the same boat. The magic of the great outdoors has soared since the comings and goings of restrictions. Mike and  Tina Barr often take to painting en plein air for that ever-important difference in perspective.

“I find that I am investing a lot more time using Bluethumb as a platform for sales and exposure and Bluethumb have been most helpful in moving this along. The world has changed so much so nothing will surprise me what will happen in the future. For me it will be more painting – a lot more painting and 200 sales by the end of the year!”

Keep up-to-date with Mike Barr’s most recent works and news on his profile here.

Mike Barr is currently exhibiting at the SALA Festival in a collaboration of 77 highly talented South Australian artists each showing two new pieces of art. Click here for details.