We’re thrilled to see that several of our artists, including Daevid Anderson, John Klein and Andrew Neilan, have qualified as semi-finalists in the Doug Moran art prize.

The Doug Moran Prize was founded by Doug and Greta Moran in 1988, and after 29 years, remains both highly prestigious and supportive of the wider arts community. Every year the Moran Prizes exhibition is held in Juniper Hall in Paddington, Sydney, where the top 30 are exhibited. The winner takes home a prize valued at $150,000. The 2016 winner of the Doug Moran portrait prize, Scarlett as Colonial Girl by Megan Seres.

The first Bluethumb finalist in the prize is Daevid Anderson, with his portrait of his grandmother Sheila. Daevid says that initially he hadn’t even realised that he had been accepted as a semi-finalist, having missed the email that notified him of his success. “I got the email announcing the semi-finalists and so I assumed that I hadn’t been accepted, as [I thought] I hadn’t heard anything else. I was scrolling through all the thumbnail images feeling a bit down, but then I saw mine pop up on the screen. I got this real rush of excitement because I thought I hadn’t made the cut. It was really nice to be surprised in that way, and yeah, of course I was excited to be picked up in the long list.” “The sitter is my grandmother. I think she’s 92 this year, still super active, really sharp – just a really great lady. The day I took the pictures which formed the basis of the painting I had gone around to visit her with my dad and just thought it would be a nice idea to take the camera. The light coming through the window at that time really highlighted her features. She doesn’t look that wrinkly in real life but the light just brought them out… This is the first portrait I’ve done in a few years.”

How does Daevid’s grandmother feel about her portrait making the cut? “She loves the picture, but hates the subject matter. She makes all these jokes about how it’s a painting of an old crone – she’s very self-deprecating. I think she finds the whole idea of having a painting of her a bit absurd. She’s very complimentary of getting into the prize and thinks that it’s a good painting, I think she just finds it a bit odd.” One of Daevid’s picks for this year is a self-portrait by Brendan Darby, another Western Australian artist. “He’s recently been doing a series of works which are pictures through wet glass, like a windscreen or a car or something and this one is sort of his face through a rain-streaked window. It’s an interesting concept.”

“To get to the semi-finalists is hugely significant, and I’m really excited to see how it goes in the next stages.”

Another Bluethumb artist announced as a semi finalist is John Klein, who painted Australian actress Maggie Dence, of whom he has known since her role in 1970s Australian TV show The Sullivans.

“She’s such a lovely lady, and she really enjoyed the whole experience. You know, it was quite collaborative,” says John of the sitting process. “We met up for coffee several times and would discuss [things such as] how I would light her and what she would wear. I wanted to light her with theatrical lighting, almost as if she’s in the footlights. John and Maggie with John’s portrait of Maggie.

“The garden gnome was her idea,” John says. “She collects garden gnomes, and she says that they remind her of when she was in the panto, playing the wicked witch in Snow White.” John agrees that the painting helped bring Maggie’s ‘big personality’ and ‘cheekiness’ to life on the canvas.

These early discussions were a big part of the painting process for John, who tends to hold photoshoots with his subjects rather than ask them to stay still for several hours.

John says that the message that he had qualified as a semi-finalist was somewhat unexpected. “I was really very excited to be honest. [As an artist] you get a lot of rejections so you kind of end up with this thick skin and get sort of jaded after a while.” 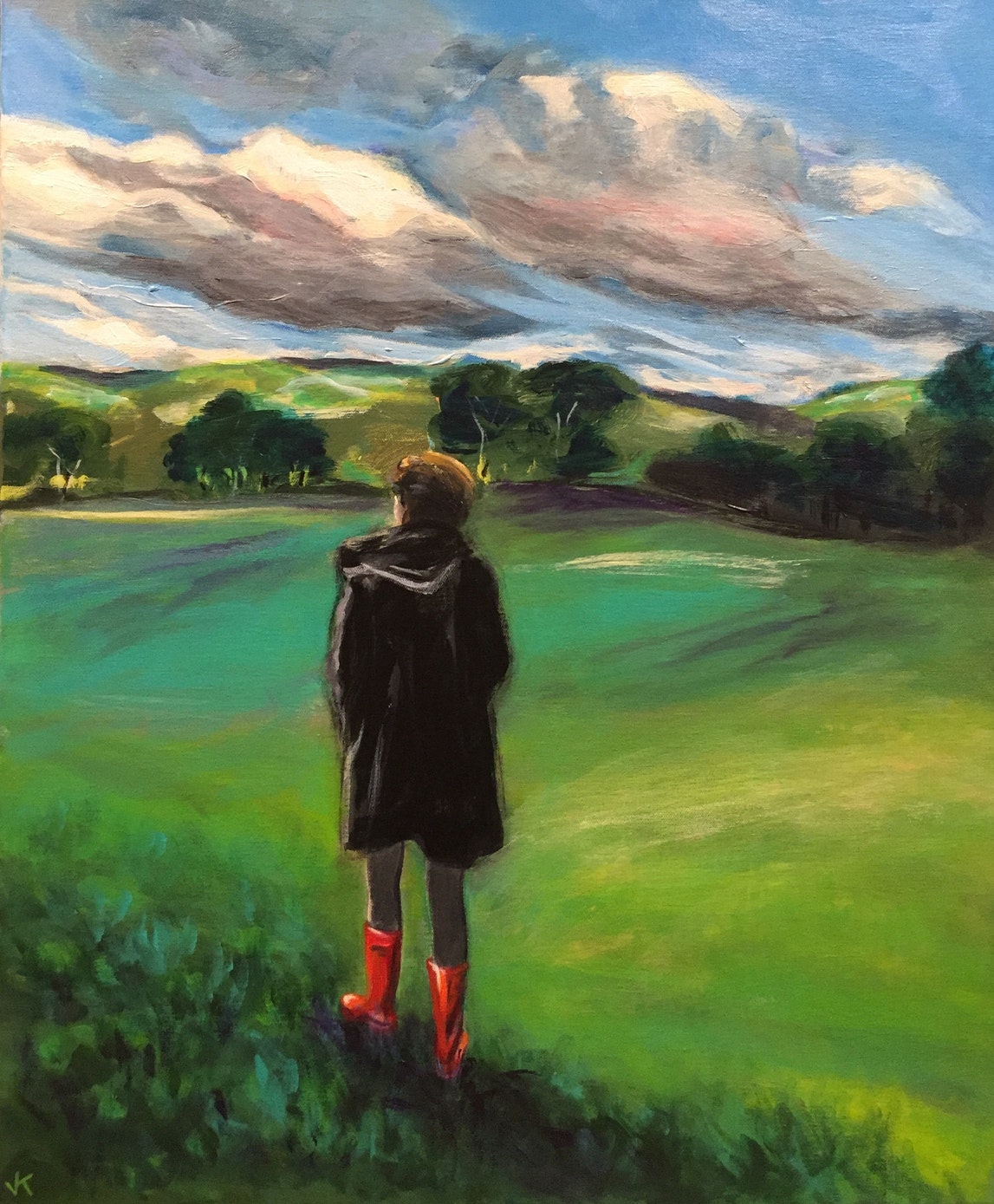 A recent addition to John’s Bluethumb profile, Those Boots Were Made for Walking.

As John points out, the Doug Moran is highly competitive, not least because of the significant prize money on offer. “If you think about it, a $150,000 prize means that an artist can concentrate solely on their art for a good year or two.” However, “I was more excited just to get through to the next round, to be honest,” says John.

Yet another Bluethumb semi-finalist in the Doug Moran this year is Andrew Naylan, with his piece Self Portrait of an Artist. Andrew was especially delighted to be chosen as a semi-finalist after some disappointing experiences in the past when entering prizes and exhibitions. “Painting and entering the exhibitions can be quite disheartening, so when you get into one of the major ones it’s a pretty good feeling. You go back and click the link a couple of times and you can’t quite believe it.”

Andrew says that he’s only recently started pursuing his art more seriously. “I’ve done photography professionally but now I’m really throwing myself into my art and seeing what I can make of it. I guess everyone is creative in their own way, but some people feel the need to explore it a bit further.” Andrew says that he’s only recently started pursuing his art more seriously. “I’ve done photography professionally but now I’m really throwing myself into my art and seeing what I can make of it. I guess everyone is creative in their own way, but some people just feel the need to explore it a bit further.” Andrew Naylan’s semi-finalist entry Self Portrait of an Artist.

Andrew decided to paint a portrait of himself, as an artist, to illustrate the struggle that one faces when trying to be creative. “You come up with ideas out of nothing and people may not appreciate those ideas… anyone that starts out to paint something they’re trying to be original with, they’re going to have a level of anguish, particularly if no one else likes it. The idea of the painting is that people who do try to be creative are a bit nuts; their head contains many layers, as symbolised by the onion. They are a many faceted, deeply thoughtful person who deep down is just nuts.”

Andrew pointed out a couple of fellow semi-finalists that stood out to him personally. “Elaina by Grantford and Gerard Elson in an Astrakhan Hat by Michael Vale. Those two are the ones that stand out to me the most – they’re unique, but also require a high level of skill. Also, both of them are very sombre and dark as opposed to bright paintings that jump off the wall.” Andrew says that being selected as a semi-finalist “certainly has motivated me to push forward and keep going and try to do the best work that I can – hopefully it will pay off.”

Wishing the best of luck to all of the Doug Moran semi-finalists! Finalists will be announced on the 11th of October.