It was a visit to Dromkeen in Victoria’s Macedon Ranges as a child that first inspired Silvia Sellitto’s artistic endeavours. The historical cottage is home to illustrations from children’s books, and Silvia recalls “standing there, telling myself, and thinking to myself, I want to be able to do this one day.” The scale, technique and surreal worlds depicted in the illustrations struck a chord in her young mind. There’s art in every nook and cranny of Silvia’s home.

Observing the realistic drawings of her mother and cousin drove Silvia to perfect her technique. She remembers spending hours copying images out of books and trying to master drawing in a realistic style. Silvia’s house is full of quirky flourishes which complement her art collection.

Nowadays, Silvia draws inspiration from her children. She’s fascinated by the methodology and process her kids employ to create surreal results. In fact, she’s so captivated by their work that she reimagines it in her own pieces. Their work helps her to “get in touch with my inner playfulness.” Her recent series, Leave the Night Light On, exemplifies this approach. In the series, she painted portraits of her children holding up masks they created themselves. A Wordless Scream, from Silvia’s Leave The Night Light On series.

“I am reconnecting with a somewhat ‘lost’ aspect of my early childhood art-making methods. I mostly recall that art to me was achieving a likeness of the subject/object – my children’s art on the other hand is so imaginary & otherworldly, that it enables me to discover these visual elements within myself and weave them into my compositions.” Working from home requires a dedicated space, and Silvia has managed to carve out a small nook to create her work in.

It’s the darker elements of her children’s work that mesmerise Silvia. While not all her children’s artworks are creepy, these are the ones that Silvia is drawn to the most. She explains her fascination – “along with the playful, lighthearted side of life, there’s also a creepy side.” The darker side of life has always intrigued her, and since having children, her work has referenced “fears and anxieties that come with parenthood.” The mask from her piece A Wordless Scream.

Having explored many different mediums, Silvia prefers to use a combination of all of them in her work. In the past, she’s experimented in collage, photography, illustration, and oil paint on many different surfaces. While she has her preferences, her choice of medium is always dependant on the concept she desires to portray. Her most recent series, End of an Era, was predominantly completed in mixed media. Silvia paints portraits of her children when they are born, which now hang in their bedroom.

Because Silvia works from her home in Melbourne, her work is often completed during the few hours her family is out of the house. “I make sure I utilise the time I’ve got without anyone else around me.” she explains. Because her space is small, her whole house becomes her studio. She drags her larger pieces out onto the dining room table, and works happily away until it’s time to pack it all away again before her children come home from school. While this sounds chaotic, it’s a system that works well for Silvia. 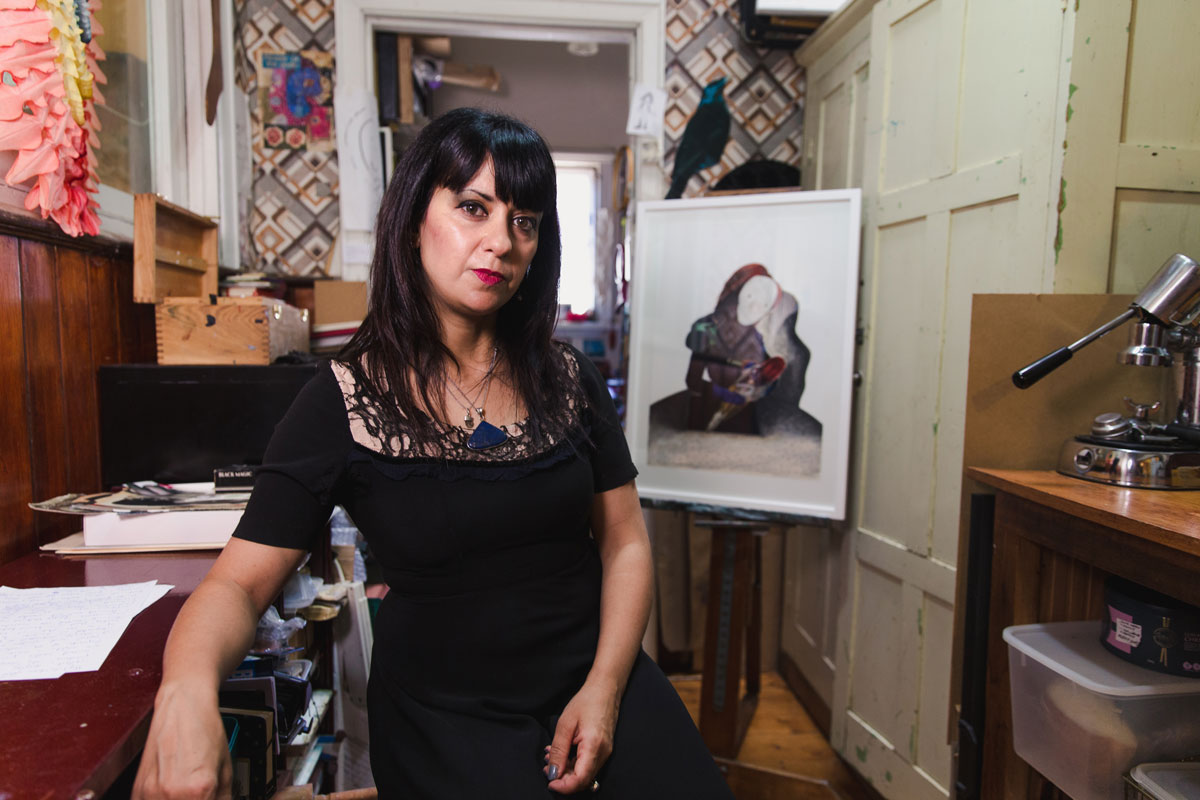 Silvia describes her portraits as very experimental. “My experimental portraiture very rarely exposes the actual subject/person – they are anonymous in a way that explores inner fragility, concealment & protection”.

Wandering around Silvia’s home, there is not a single bare wall to be found. She is not only an artist, but also a passionate collector. Artists that can be found adorning her walls include fellow Bluethumb artist, Amos Duggan and former students of hers, Christina Hayes and Seth Searle. As with her own work, these artists often explore weird and creepy themes in their work. Silvia believes it’s important for artists to collect the work of their contemporaries, “I think it carries on that whole support network amongst artists…it can help drive an artist to keep creating, if you’re another artist collecting their work and being inspired by the way they create work.”

Have a look at the video of our chat below!