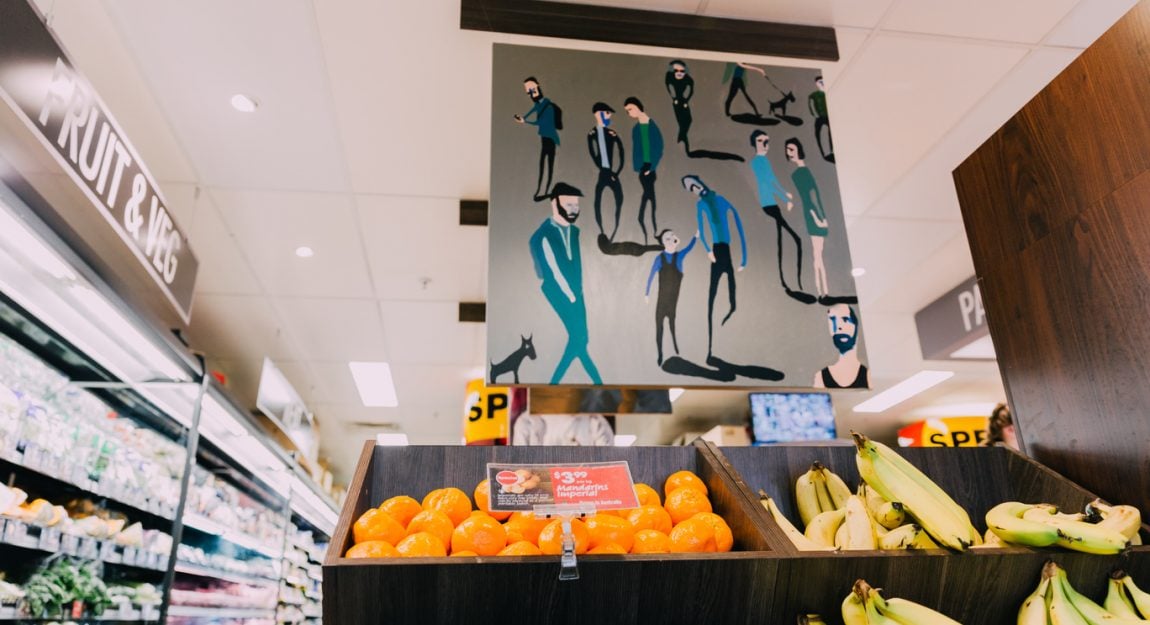 News and Media, Festivals and Events The most recent report into artist wages shows the traditional art market is failing the majority of artists.

In real terms since 2009, the average annual income earned from creative work has declined by 19% while artists continue to spend around half of their working time on their creative practice. In other words, the art market is failing the majority of Australian artists. Our pop-up is next door to ACCA at the IGA (you can just see the instantly recognisable sign in the background).

Melbourne Art Mart: Our Pop-Up With a Purpose

To shine light on this issue, we’ve set up shop next door to the Australian Centre for Contemporary Art, where the Melbourne Art Fair is being held, at the Sturt Street IGA just down the road throughout the Fair. The artists’ work hangs inside the supermarket amongst the lollies, fruit and veg, and is available to buy by simply scanning a QR code with a smartphone. The novel choice of venue highlights how, unlike the majority of the high end art at the Melbourne Art Fair next door, buying art can be easy, affordable, accessible and everyday, just like buying groceries from your local IGA. It also shows how, with a bit of entrepreneurial spirit, there are so many new and exciting avenues for artists to present their artwork outside of traditional galleries to make a living wage. Can you spot the artwork?

Why Next Door to MAF?

The biennial Melbourne Art Fair was cancelled in 2016 “until further notice”, despite being one of the world’s longest running art fairs. According to a statement at the time by the Melbourne Art Foundation, a number of key galleries withdrew their applications for exhibition spaces because they no longer felt able to make the required commitments to the 2016 fair. Business as usual at Sturt St IGA as shoppers interact with the art.

“While the situation is deeply disappointing, the board understands the economic imperatives of commercial galleries, and the many shifts in the global contemporary art market,” the statement read. Comfortably Numb by Cameron Holmes making itself at home.

The newly appointed Melbourne Art Foundation Director and CEO, Maree Di Pasquale, has promised a “revitalised fair”. However, Pasquale’s recent statement, and the smaller than usual number of – mainly elite –  galleries involved, suggests the fair has perhaps not learnt from 2016’s mistakes. The artwork hangs amongst the fruit and veg.

“With a highly selective offering, Melbourne Art Fair is set to become the premier showcase for leading Australasian contemporary, and will once again be instrumental in driving critical and commercial attention for galleries and their artists. It will play an important and iconic role in reaffirming Victoria’s profile as a commercial hub and centre for cultural accomplishment.” And amongst the lollies! The placement of this piece really adds to the meaning.

How Bluethumb is Making a Difference

Unlike much of the art market, sales on Bluethumb are growing rapidly. Over 2000 Australian artists have now successfully sold their art to collectors using the platform, with many earning well above the national average by selling online. 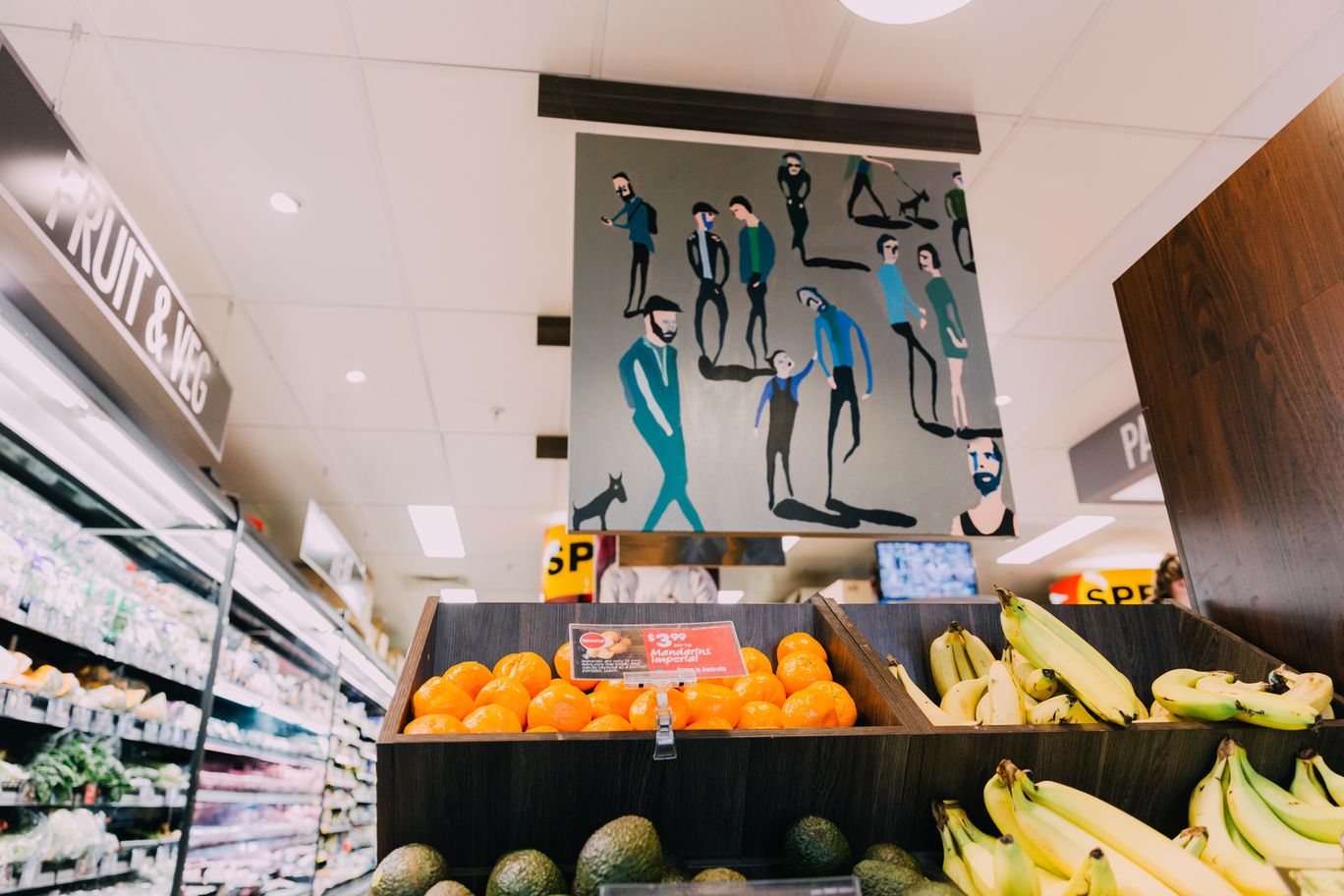 Southbank, Thursday by Sharon Monagle was specially created for our Melbourne Art Mart on the Southbank.

“Commerce is not a dirty word. My view is that commerce is sustainability in the field of your profession. The majority of professional artists in the developed world live on or below their nation’s poverty line. Many will resort to paid work elsewhere to survive, which eats away at their creative capacity. It’s only the lucky few who make a living wage. 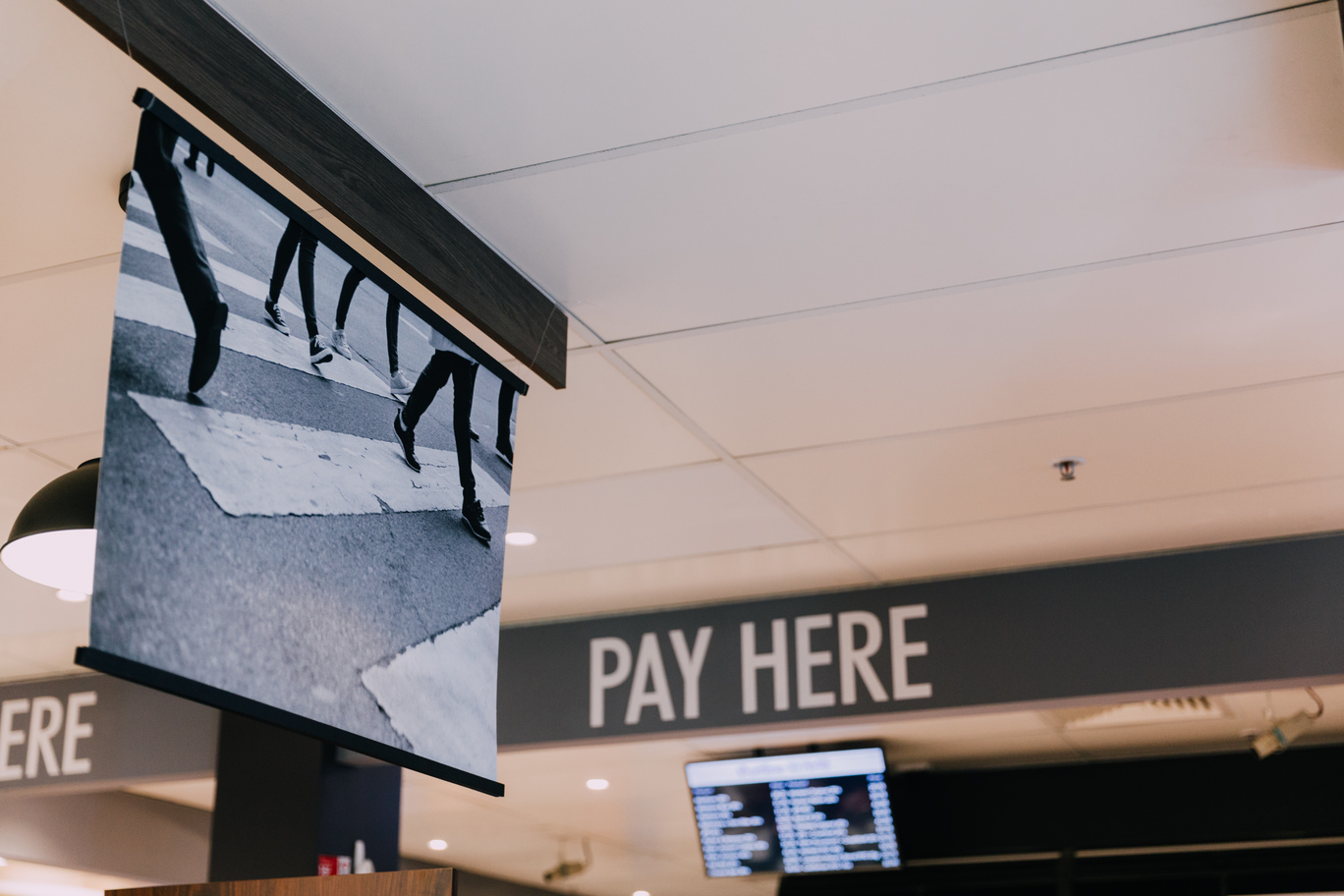 “Our mission is to support all Australian artists in their pursuit of success. The best emails we get are the ones saying ‘because of the sales I’m getting from your collectors, I can now quit my day job to pursue my dream of being a full time artist’. There’s surprises in every corner! Totem by Ballarat Indigenous artist Josh Muir really pops next to the Ben & Jerry’s fridge.

“Traditional galleries may be under pressure, with many smaller ones closing their doors, but this is largely due to market evolution primarily changing buying behaviour. In fact, there has never been more than 500 commercial galleries Australia wide, maybe supporting 50 artists each, so only around 2500 artists at any one time –  a tiny fraction of the nation’s practising artists. “This avenue has always been narrow and hard to access. The changes in buying behaviour and technology give emerging artists a better opportunity than ever before to establish themselves, using whichever channel they see fit. More than ever those who are hungry and willing to self teach will prosper and create their own success. I see this as a great leveller in society.” And like buying online, Melbourne Art Mart is open outside the hours of traditional galleries.