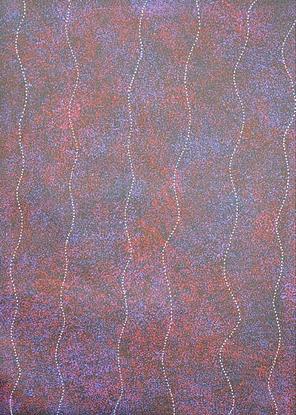 The Bush Plum is a popular variety of bush tucker that is only found at certain times of the year. It is found throughout the Utopia region where it has declined in abundance due to the grazing of cattle and rabbits. The bush plum fruits in the summer time after rain & is an important food source, even though not all the plum is edible. When young the fruit is green in appearance but as it matures it becomes a purple-black colour. It is similar to an olive. The plant can grow up to 3 Metres high and has blue green leaves & produces a creamy white flower. In the Dreamtime winds blew from all directions carrying the bush plum seed to the artist’s ancestral lands. Gracie combines complex fine dot patterns to depict the contours and colours of the land and the walking tracks used by women to collect the bush plum. In accordance to traditional law the responsibility for the Bush Plum Dreaming has been passed down to Gracie from her father and her aunt, who are responsible for ensuring that she perseveres its traditions.

This painting needs to be framed. It's also being sent direct from the artist at the Central Desert. Please expect a slightly longer wait for this very special artwork to arrive. 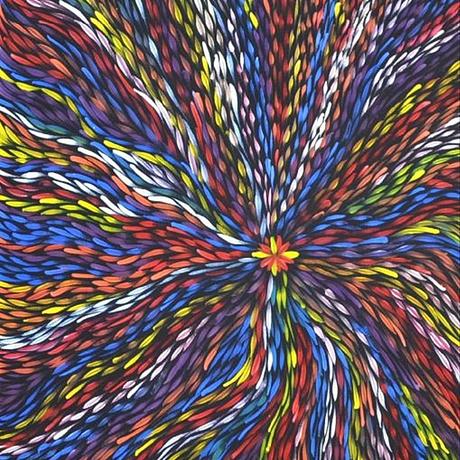