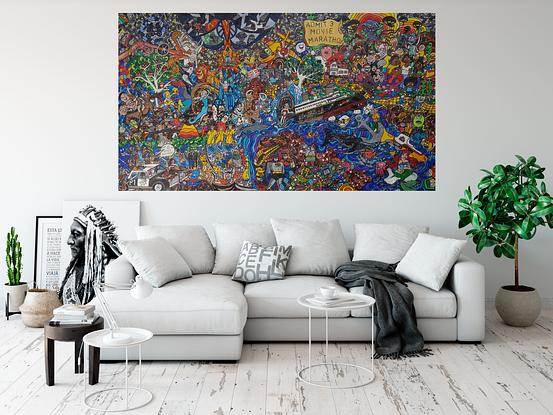 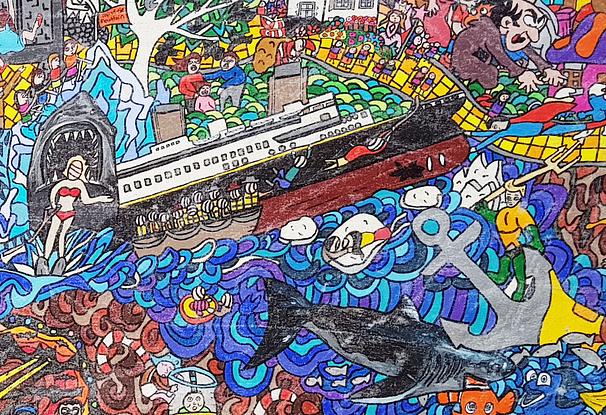 Admit 3 Movie Marathon is the 3rd painting in the theme of bringing together various movie and tv characters by Karen Elzinga. The hugely popular paintings are fun, vibrant, colourful and entertaining and will have your visitors engaged tracking down and naming the various characters involved.

Admit 3 Movie Marathon encases the overall theme of movie aliens invading. So the top half of the painting has the spaceship from Independence Day firing down a fire ball onto (instead of the Empire state building in the USA) it is firing at the castle from the movie Frozen. You will see green martians and the tri pod from war of the world, across the top of the painting as they start the invasion. Characters from Jaws, the Meg, Adventure Time, Ghost busters snow puft man, Planes, the Tri pod from war of the worlds, smurfs, the titanic, monster inc, moby dick, ice age, singing in the rain, frozen, up, Mr Bean, Blues brothers, Brave heart, Aladdin, Wizard of Oz, Charlie and the Chocolate Factory, Penguins, the Lion King, Gravity, the Incredible s, Man from Snowy River, the Flintstones, Care bears, the Sound of Music, ET, Porky Pig, Snow dogs, emoji, Bananas in pajamas, Sesame street, Batman and Robin, Huckleberry hound, m &m's, Superman, Spider-man, Thor, Family guy, Star wars, Planes, the Simpsons, Bojack horseman, The birds, Close encounters of the third kind, Bugs life, Angry birds, Road runner, Blue, Aqua-man, the Beatles boat, Cleveland show, Ed Ed and Eddy, Regular show, Rick and Monty, American dad, Regular show and more star in this work.

The texture of this painting is the most amazing part, the paint surface has been subtracted after being painted and etched back to achieve the scratchy appeal of an old film reel. This looks amazing, so different to anything else out there on the market, the look is unique, different and stunning once varnished. If you want something totally original than this painting will do it.

Karen Elzinga is a professional artist with a double degree in Fine Art and Visual Culture and over 25 years of painting experience. She only used the best paint and canvas. She paints flat allowing her to gallery wrap the edges of the painting (gallery wrap means the edges look at the same as the front does) no horrible edges or blanket colour edges. The painting is mounted after completion.

This painting won't last long, Admit 1 went quickly, and admit 2 was commissioned by the buyer to include his own movie favorites, which you can also do if you wish. 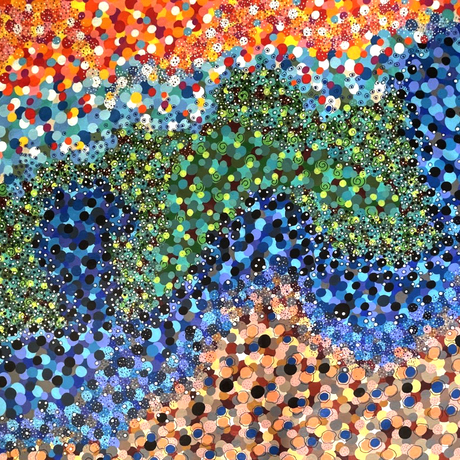 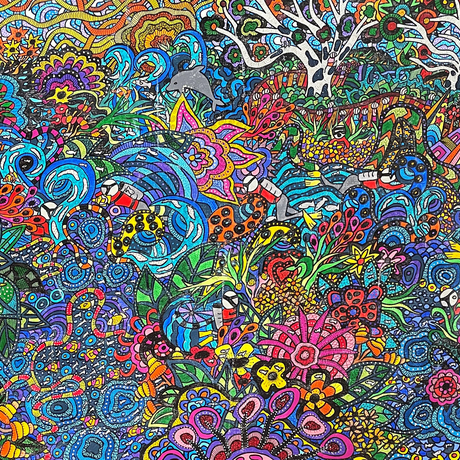