Nestled between the bustling urban haven of Collingwood’s Smith St precinct and the peaceful oasis of Yarra Bend Park, hides the charming Abbotsford home of Bluethumb co-founder, George Hartley. The terraced house is George’s first home and he has lived here for almost 3 years.

After growing up in Adelaide, George fell in love with city living during an 18 month stint as a teacher in Japan. George recalls, “I wanted to come back to Australia, and had loved living in a big city. Growing up in Adelaide, Melbourne seemed so exciting. My sister Rose had been living here, and to me it was our cultural hub, and had the best music scene. So it was next stop, Melbourne.”

George’s cream-coloured 1920s weatherboard is a beacon of natural light, with floor to ceiling windows bringing the outdoors in. It took a lot of hunting to find such a place. “I had been looking for a house for a few years, I think I would have been through more than 100 places (agents hated me!).” George continues, “I finally bought in 2017. I loved it immediately, especially the light in the living room.” 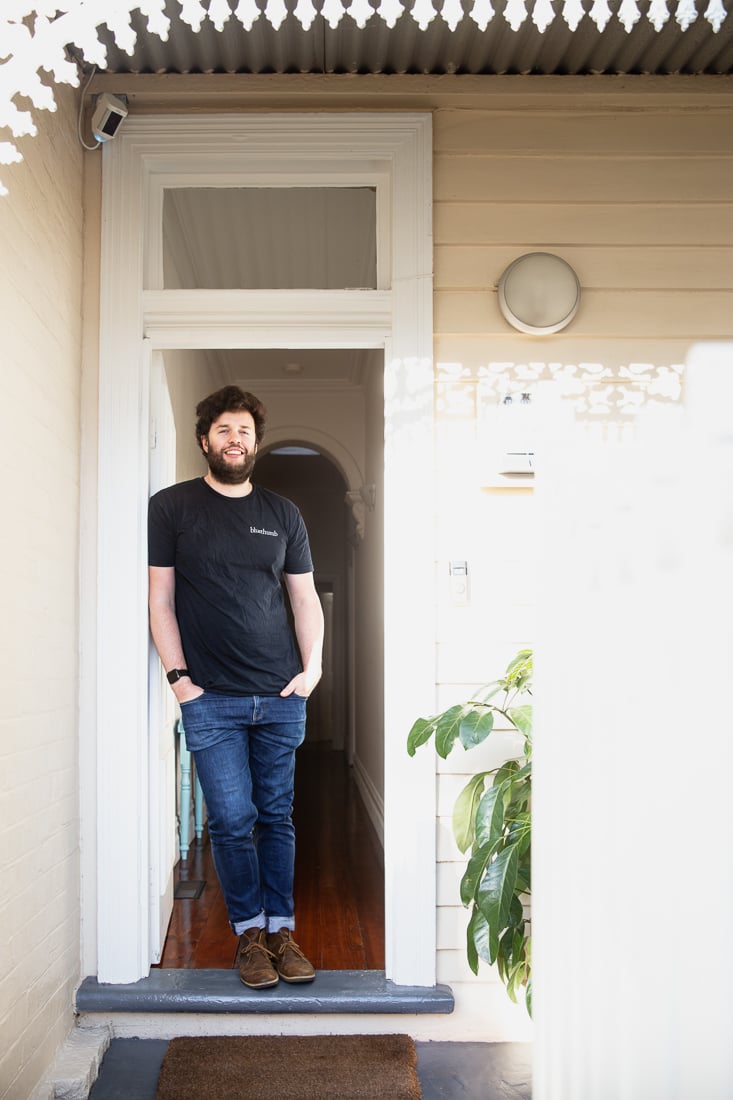 Crossing the threshold of the dwelling, George’s love of plants and bright colours are instantly clear. A hot pink pot sets the tone for a house with a love affair with the hue, with at least a splash of it in every room. Upon reaching the living room it’s clear how the space is used. Testaments to George’s musical past are scattered throughout the space – from the stunning timber piano, to the cute ukulele perched on top, the guitars framing the nook or the bookshelf adorned with biographies of idols such as Keith Richards.

Unlike many of us who have such items and never use them, these instruments often feel the strum of a finger. “Occasionally drinks with friends will devolve into a jam session at home.” He laughs and adds, “I’m friendly with my neighbours, which is surprising, considering how much poorly played, late night music they’ve endured from us.” George’s minimalist hallway features a stunning antique painting and lets the building’s heritage do the talking.

Aside from the occasional late night jams, the house is a space for pleasant days passed quietly. “My weekends are enjoyably pedestrian. They are a time for me to think more deeply about work, without meetings or distraction. They generally involve my girlfriend Lauren and I walking Frankie along the Yarra to Abbotsford Convent. Frankie barks at the goats while I drink coffee.”

Balancing his time between Bluethumb and his other venture, Smartrmail, during the week, there’s certainly a lot of work for George to think about! You might recognise Bluethumb office dog Frankie! She’s a big fan of George’s comfy couch and the gorgeous Kim Leutwyler original that hangs above it.

Over the last few months as isolation measures have come into place, George has found himself spending more time at home than ever. It’s not uncommon to see the Kim Leutwyler‘s G&T in the background of team meetings! “Isolation is obviously hard, but the silver lining is it’s given me more time at home, and afforded me the opportunity to do house tasks I had been putting off. I’ve framed and hung the artwork by Sarah Tracton I bought at the Crosspoint Perceptions pop up. I’ve hung the Logan Moody piece I recently commissioned for Lauren. This is my first house, and realise I’m lucky to even be able to own a house in Melbourne. All this time at home has made me even more grateful to have a space that is mine to decorate, improve and settle into.” George Hartley and his girlfriend Lauren cosying up beneath Kim Leutwyler‘s stunning G&T.

5 year old French Bulldog Frankie is also enjoying the extra time George is home during isolation. “She is a small hound with a large personality.” He chuckles, “She’s not the most obedient, nor overly affectionate hound, however she’s been a constant companion and comes to work daily (when the office is open). Like all the world’s dogs she’s been enjoying iso a lot, as she’s getting walked a few times a day.” Frankie spends her days getting cosy on the couch!

Art is a central part of George’s home styling ethos. “I love colour and light. I’ve always enjoyed a home that feels warm, lived in and is filled with things that are not only aesthetically pleasing but functional. Plants and art were always something I included for colour and Lauren applied her design touch with the soft furnishings. One of the more recent investments I made to my home was Italian linen curtains which instantly added warmth and a softness to the room. I had to sell some bitcoin to fund it, but I think the investment was worth it.” 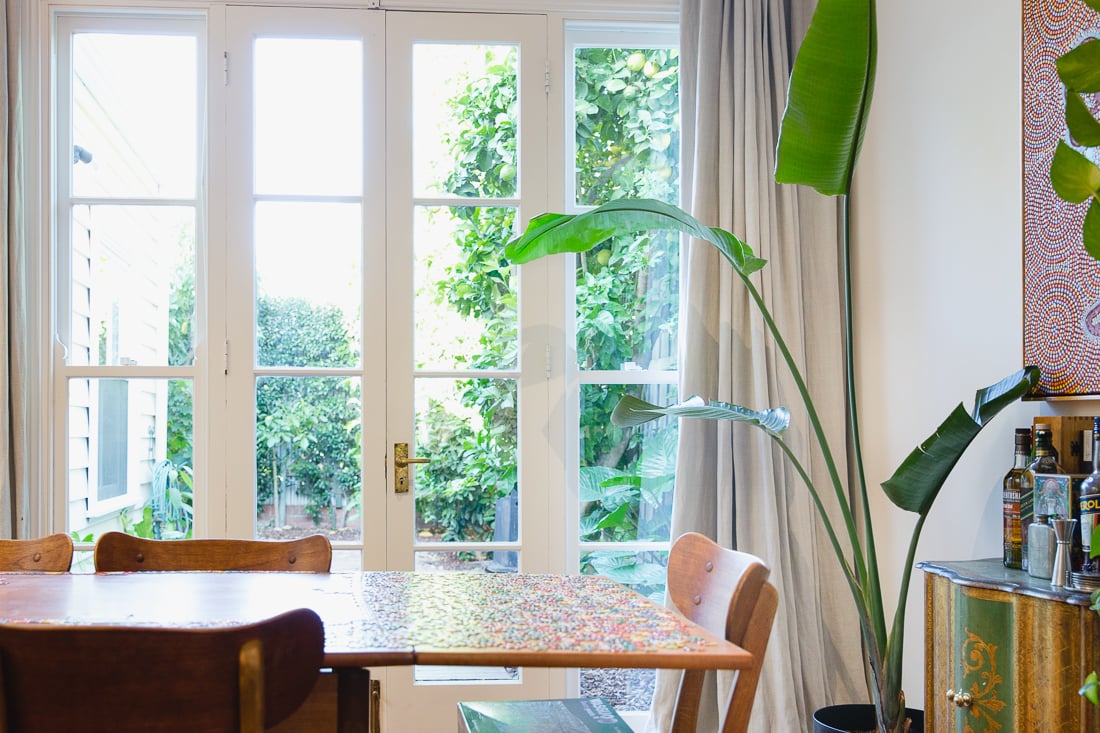 The dining table and bar are tucked right next to the impressive floor to ceiling windows that open onto a small courtyard in the back.

Collecting art is often a passion of those who love art but haven’t had the ability to pursue it themselves. George is no different. “I always liked art, and studied it throughout school, but unfortunately suffer from a lack of talent. My dad was an artist before he made his next natural step into accounting. I was a UX designer before Bluethumb, and appreciate user centred design.”

When Bluethumb came into his life, he took his first steps into collecting art. It all began with Mulga Queen by Kelman Foley of Papulankutja Artists. “We’d just signed our first Indigenous art centre, and they upload works by Kelman Foley. I’d never seen Indigenous works like it. It was a dot painting, but had these amazing splashes of turquoise. It was traditional but so modern. I bought it that day, had it stretched, and love it.” 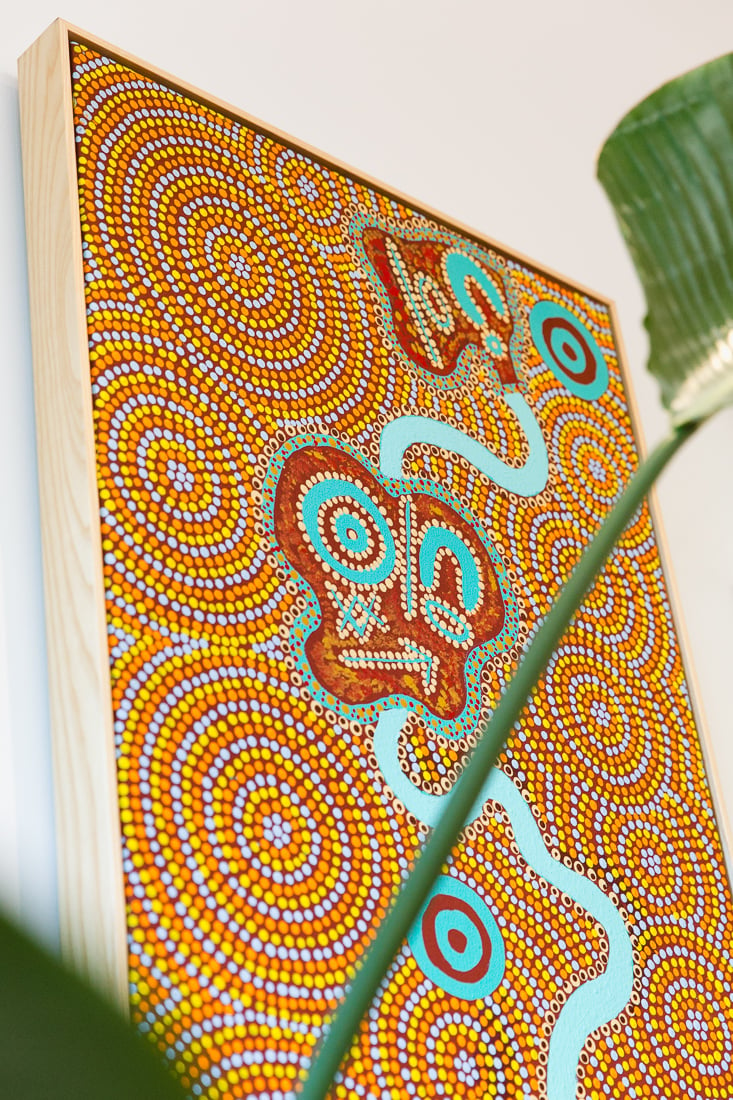 The Kelman Foley piece that started it all! This piece was shortlisted in the 2017 Bluethumb Art Prize.

It’s been the same with all the other pieces in George’s collection. A moment of clarity. An unforgettable gut feeling. “I buy art based on how it makes me feel. When I see something that I react to immediately, that’s when I look closer.  They say anything new tends to make you feel uncomfortable at first. It’s an evolutionary response to new things, to help us stay alive. Your mind immediately rejects it. So when art (or music, or literature) reflexively brings out a strong feeling, it’s worth investigation. You may end up hating it, or you may end up loving it. But I start with my gut reaction, and go from there.” 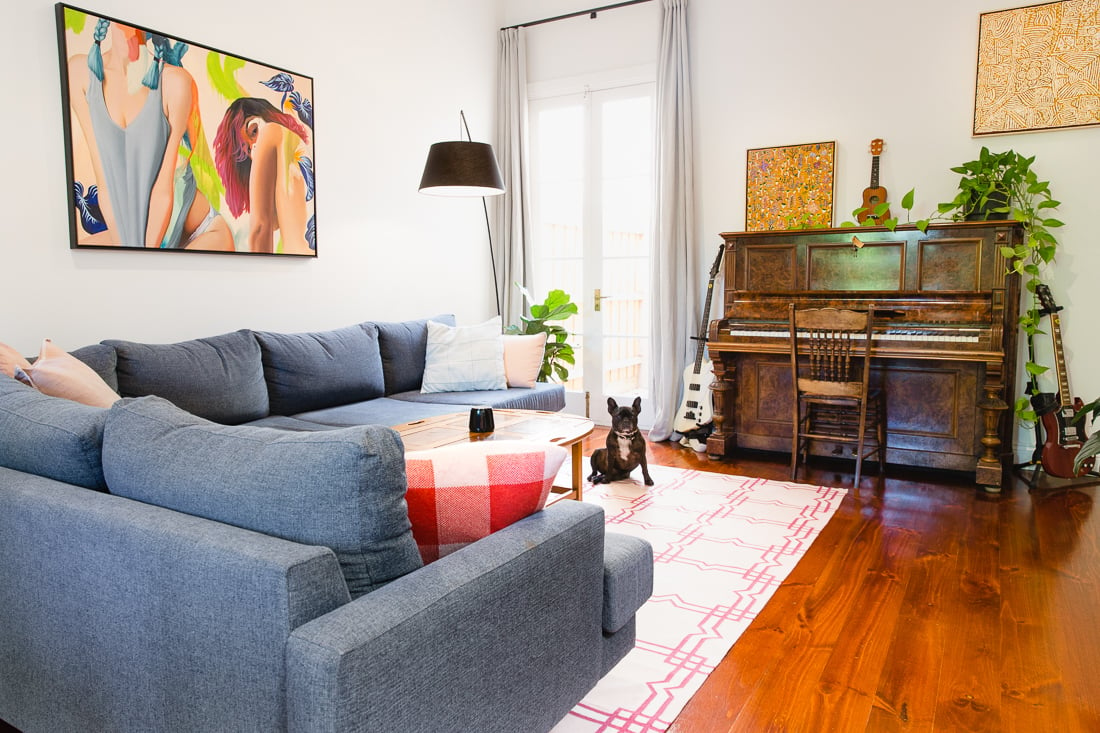 Many late night jams have sprung up in this room, witnessed by Kim Leutwyler‘s G&T, Bush Medicine Plants by Margaret Kemarre Ross of Ampilawatja and a painting passed down from George’s parents by Lorna Brown Napanangka of Papunya Tula Artists.

When collecting art in this manner, it can be interesting to see a pattern emerge. As with many collectors, there’s no single style that George is attracted to, however he says “if there’s a theme at all, it might be bold colours.  I have a huge Kim Leutwyler piece in my living room which I love. It has the most incredible palette. I have a complimentary piece to it from the same artist which a friend had commissioned too for my birthday.”

While it may seem like an art collection is born out of happenstance, it’s in fact sometimes a very conscious decision. At times George was aware of an emptiness on his walls and sought the perfect piece to fill it – at other times, he fell in love with a piece and had the fun of finding it a home on his walls. 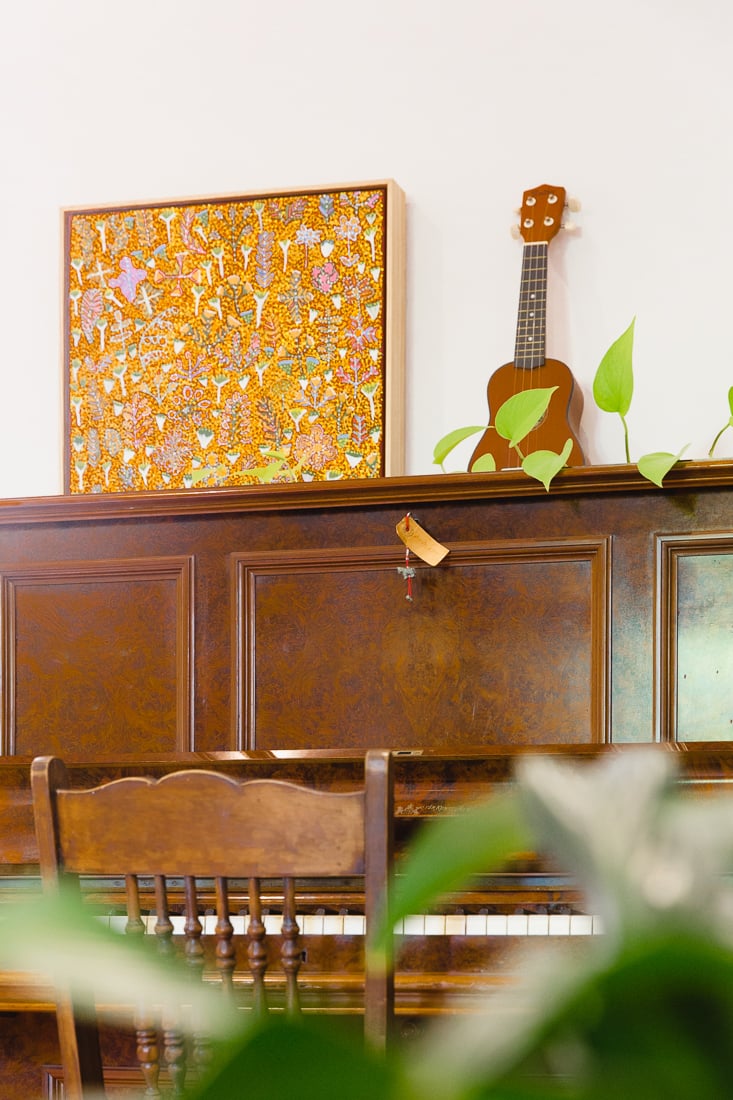 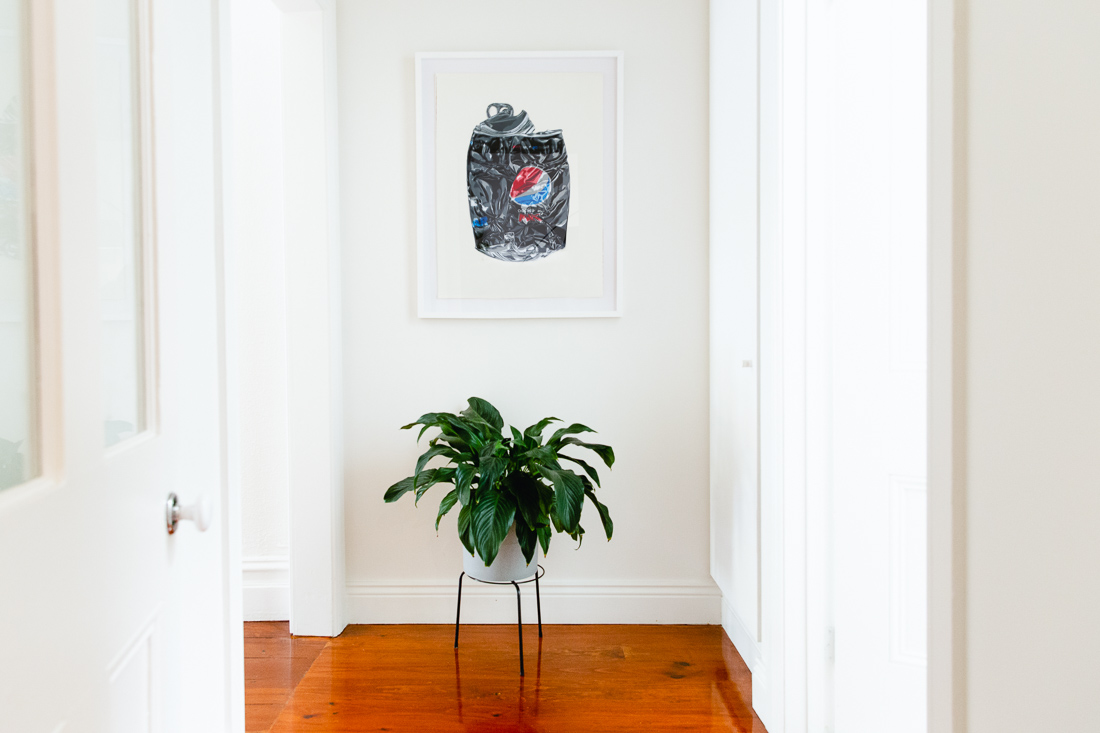 Logan Moody’s crushed Pepsi Max can hangs in the hallway. George commissioned this as a surprise gift for his girlfriend Lauren, who is a huge fan of Pepsi Max.

Galleries have been the traditional beginning of an art collection. However, when he co-founded Bluethumb with his brother Ed Hartley, George disrupted tradition to make art accessible. It only follows that he’s most comfortable buying art from the very model he created. “I’ve never felt at ease in a gallery. I don’t find them comfortable spaces. I won’t know the artist hanging on the wall, or if I could afford the price tag, or if I’m dressed well enough, I don’t feel like I belong in the space. Buying art online represents everything I passionately believe in: openness, fairness, zero-pretension and an equitable playing field for artists. The opposite of what art galleries are.

“My favourite part of buying through Bluethumb is the people, which is a strange thing for a digital platform. But we have 900 new messages a day from our community on our web chat. Plus our other social channels. Our artists, buyers and team who have grown with us continue to inspire me.” 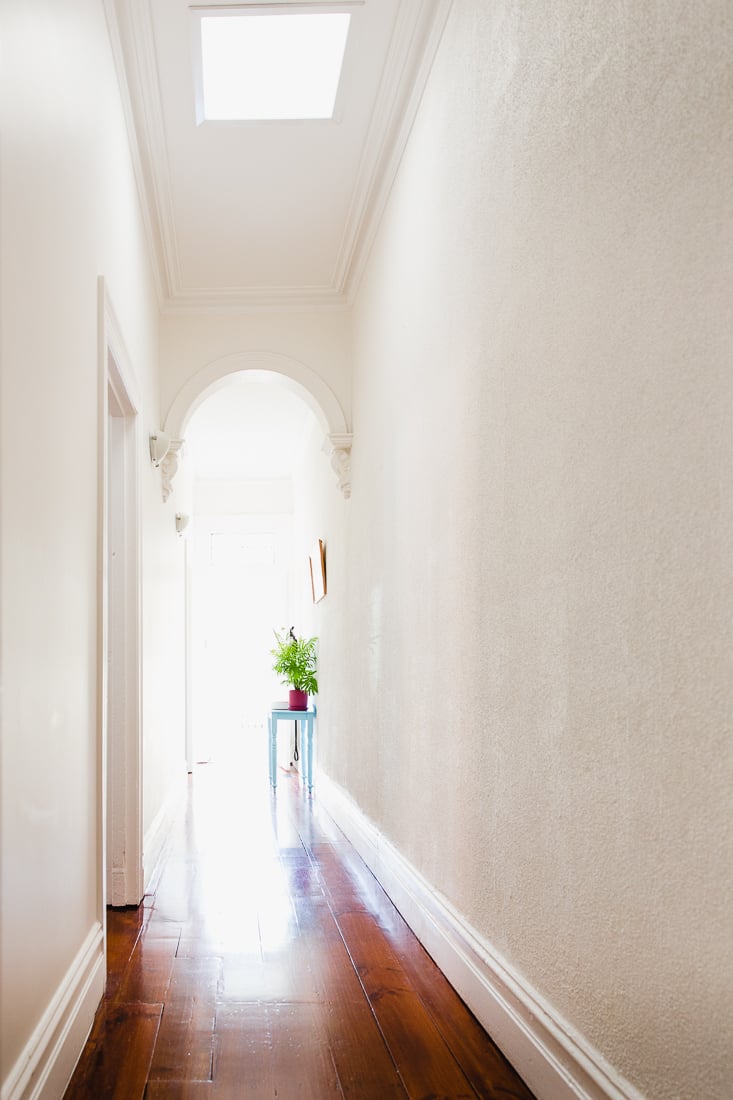 Stepping into one of the bedrooms, we’re greeted by a cheerful splash of pink from the armchair and the Jimmy Donegan stunner hanging opposite.

So what’s in store for George’s art collection next? “One of my favourite albums ever was Sea Change by Beck. This piece by Ben Tankard is sold but I’m so tempted to commission it again.”

However, in a dream world where time travel is possible, his heart would truly go to a Keith Haring mural of his own, ideally from his 1984 visit to Melbourne. Having lived near the famous Collingwood mural for many years, George is not immune to the wonders of Haring’s work!

George parts with a final piece of wisdom for budding art collectors: “You know you love a piece when you can’t stop thinking about it. If you see an artwork and three days later it’s still in your mind, then that’s the piece for you. Bluethumb allows you to create a ‘Favourite list’  by liking pieces that catch your eye, that way you can always come back to it if you decide you want it in your home.

“Also, from my Aunt Sue who’s been an art collector for decades. “If you can’t decide between two pieces by the same artist: buy the big one.”” Pukara Rock Hole by Jimmy Donegan of Papulankutja Artists is in the temporary care of George Hartley while it awaits a forever home. A mammoth drawing by Sarah Tracton hangs in another bedroom. George purchased this at our Crosspoint Perceptions pop up in 2018. 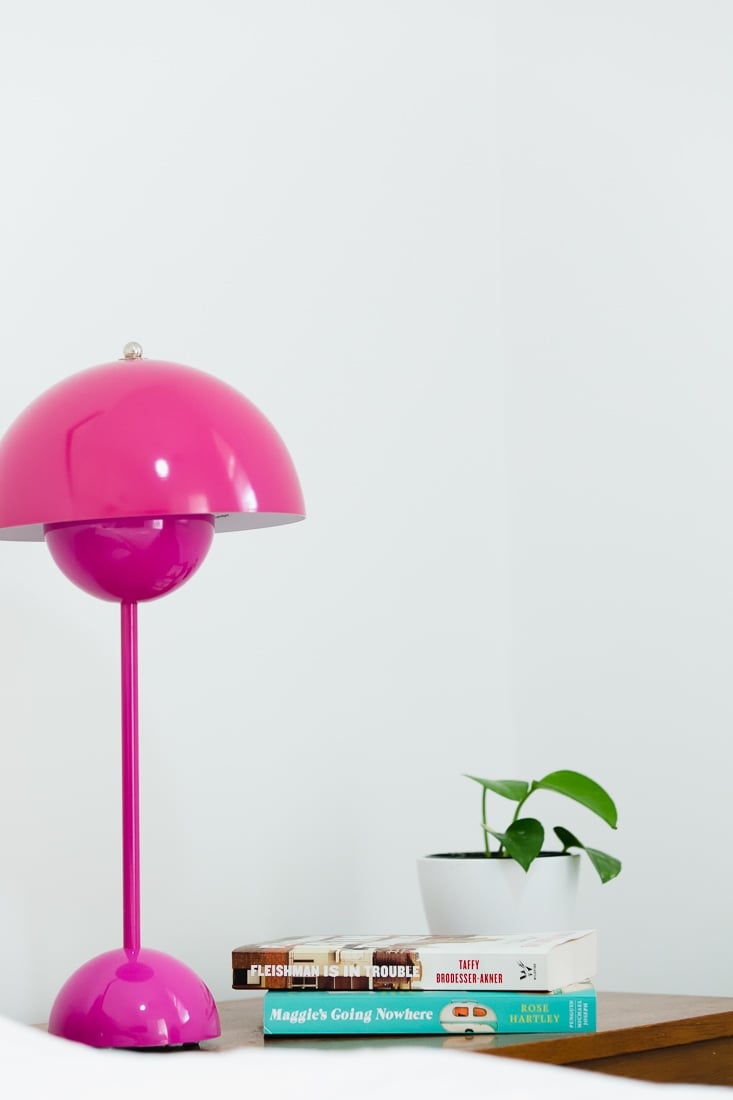 Maggie’s Going Nowhere, the debut novel by George’s sister Rose Hartley, is perched by the bed for some cosy nighttime reading. 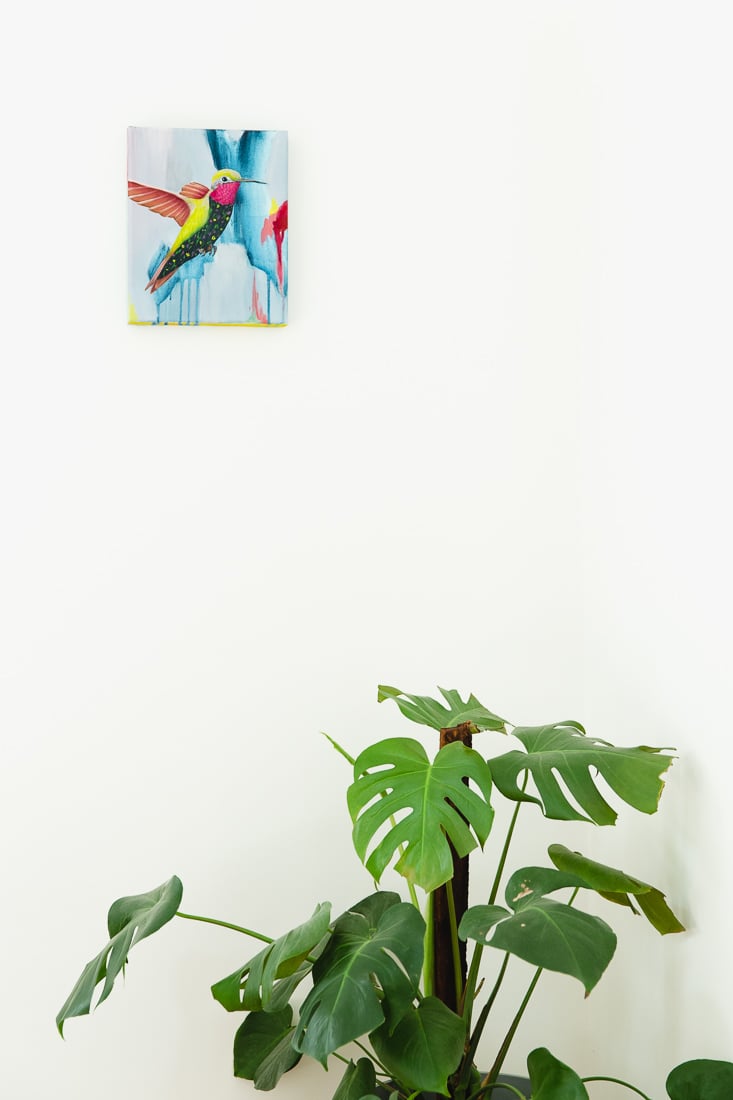 Do we spy another Kim Leutwyler? This cute little bird was commissioned for George by a friend of his. George Hartley’s home is a testament to a love for music and art!