Winners of the Mission To Seafarers Victoria Maritime Art Prize

What a busy night it was at the Mission to Seafarers Victoria Maritime Art Prize on Thursday! The 16th year of the award saw a huge turnout, with the beautiful heritage building filled to the brim with artists, art collectors and lovers of all things maritime. Once again, Bluethumb was honoured to host the prize online, helping to double the number of entries received in 2017.

With 86 finalist artworks on show, the prize was a tough one to decide for the judges. However, they persevered and after 10 consecutive years of entering the prize, the overall $15,000 acquisitive award went to Joni Dennis for her portrait of two female captains, Aye Aye Captain.

“I discovered there were only 8 women sea captains of container ships in the whole world,” explains Joni when asked about her inspiration. “I was inspired by their strength, ambition and relationship to the sea, which at times must be challenging.” Joni with her daughter in front of her winning artwork.

Aye Aye Captain is a spectacular mixed media piece using nautical maps that is most impressive in person. The ocean has diamond dust and 24 karat gold set into it, which sparkle as the light catches them. “I added these to make it feel more feminine while still presenting them as strong images,” says Joni. “Every time I tried to add colour to their faces, it sexualised them and took their strength away.”

“Joni Dennis’s collage piece was a fine choice as the overall winner,” says Sarah Hughes, Bluethumb’s curator and a member of the selection panel. “The work has a balance of intricate design and current topics surrounding women in male dominated environments.”

The Runner Up Prize went to Robert J Williams for his large, subtle watercolour of HMAS Cerberus, Rust In Peace. The artwork captivated the audience on the night, with it’s soft, neutral colours and lifelike representation. The sinking ship was installed as a breakwater in Victoria’s Half Moon Bay in 1924, and has been slowly decaying ever since. This is the second year in a row that Robert has claimed a prize at the Maritime Art Prize. Last year, he won the Best in Traditional Maritime Art Award ‘Runners up’ award for his work Telegraph.

This year’s Best Traditional Maritime Art Award was awarded to David Rowe. His oil painting, Naval Mechanic, is a peek at the “all important under side of a ship – the mechanic”. 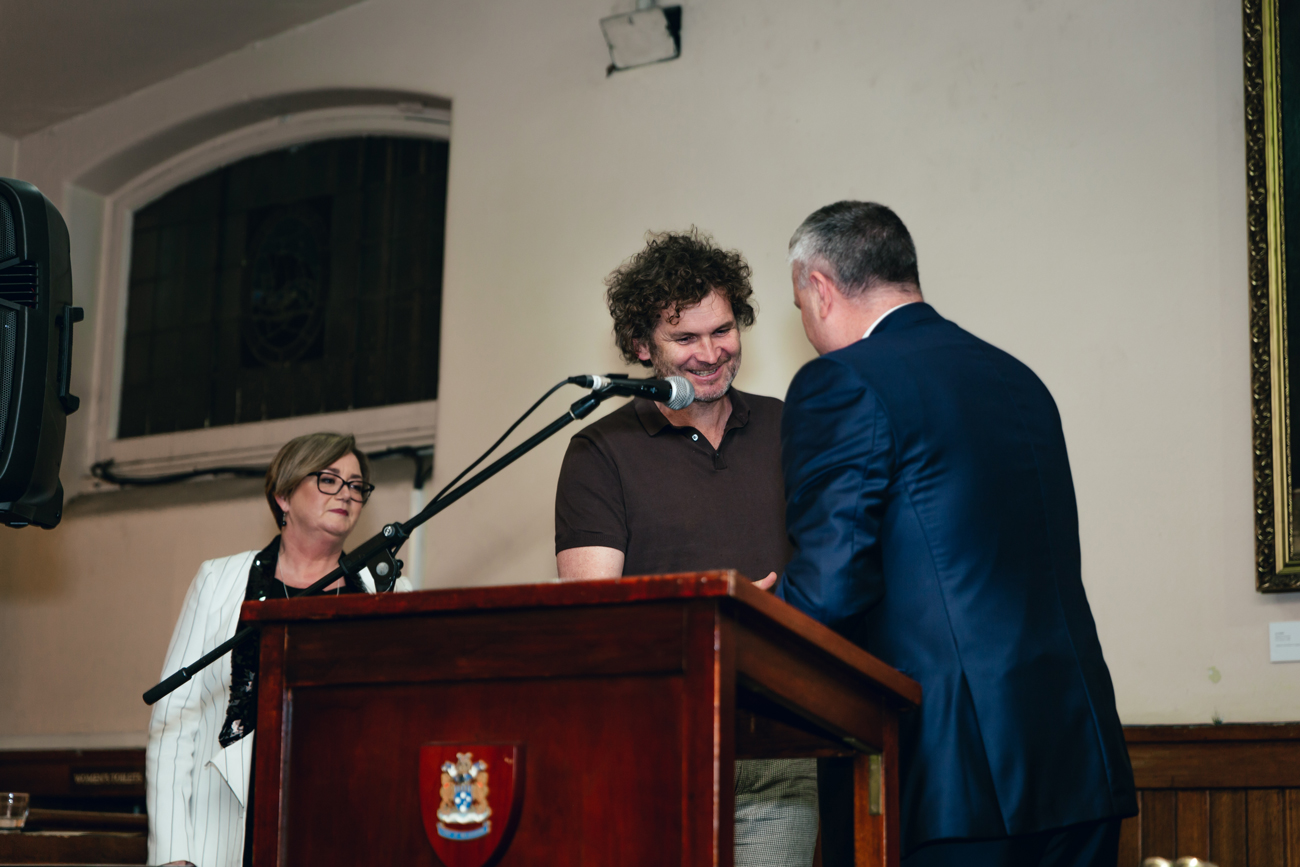 David Rowe accepting his award at the Mission to Seafarers building in Melbourne.

Winner of the World Emerging Artist Award, Ben Tankard, is thrilled with the success in his first year entering. “I hadn’t entered any prizes for a while and I was aware that I needed to make more of an effort to. Being selected, and then getting the phone call to find out I’d won the emerging artist award, was fantastic. The calibre of works was very high, it’s a prestigious award, so I’m very happy.” There were lots of exceptional artworks on show!

Ben’s Unpopular Penguin 286 takes the book cover of The Odyssey and gives it a wash of antiquity, similar to the rusting of a ship on the sea. The Odyssey is the second oldest surviving piece of literature from Western civilisation; a tale of the Greek hero Odysseus’ journey through the waters of the Mediterranean. The quality and breadth of the the artwork was exceptional, from traditional watercolours to illustrations and collages. The Maritime Art Prize is the major fundraiser for the Mission to Seafarers, an organisation which provides much needed support to far flung seafarers. It’s also a notable event on Melbourne’s art calendar, drawing huge crowds into the heritage building. Popular Bluethumb artist Karen Bloomfield was a finalist for the third year running. For Karen, it’s rewarding entering an art prize that goes towards helping those working in an industry she’s captivated by. “I love being part of an Art Prize that specifically recognises and appreciates the industrial nature of a subject that I sincerely love portraying. Over the years I have been involved, I have also come to understand and support the importance of the work undertaken on behalf of the sea men and women that the fundraising of the prize assists.” Karen Bloomfield traveled to Melbourne from NSW Central Coast for the event.

There is still one award left to be announced – the People’s Choice! Click here to cast your votes for your 5 favourite artworks. Voting closes October 25th and the winner will be announced soon after.

View our curation of the finalists who exhibited on the night or browse more photos from the event below. The Bluethumb team at the Mission to Seafarers Maritime Art Prize. From left to right: Freddy, Alex, Sarah, Sheeraz, Jules and Megan (behind the camera!)