It takes a lifetime of learning to be considered a master of your craft. Perseverance, practice and skill combine in the works of these 6 technical masters creating incredibly skilled works. Discover 6 of Australia’s contemporary technical masters below. 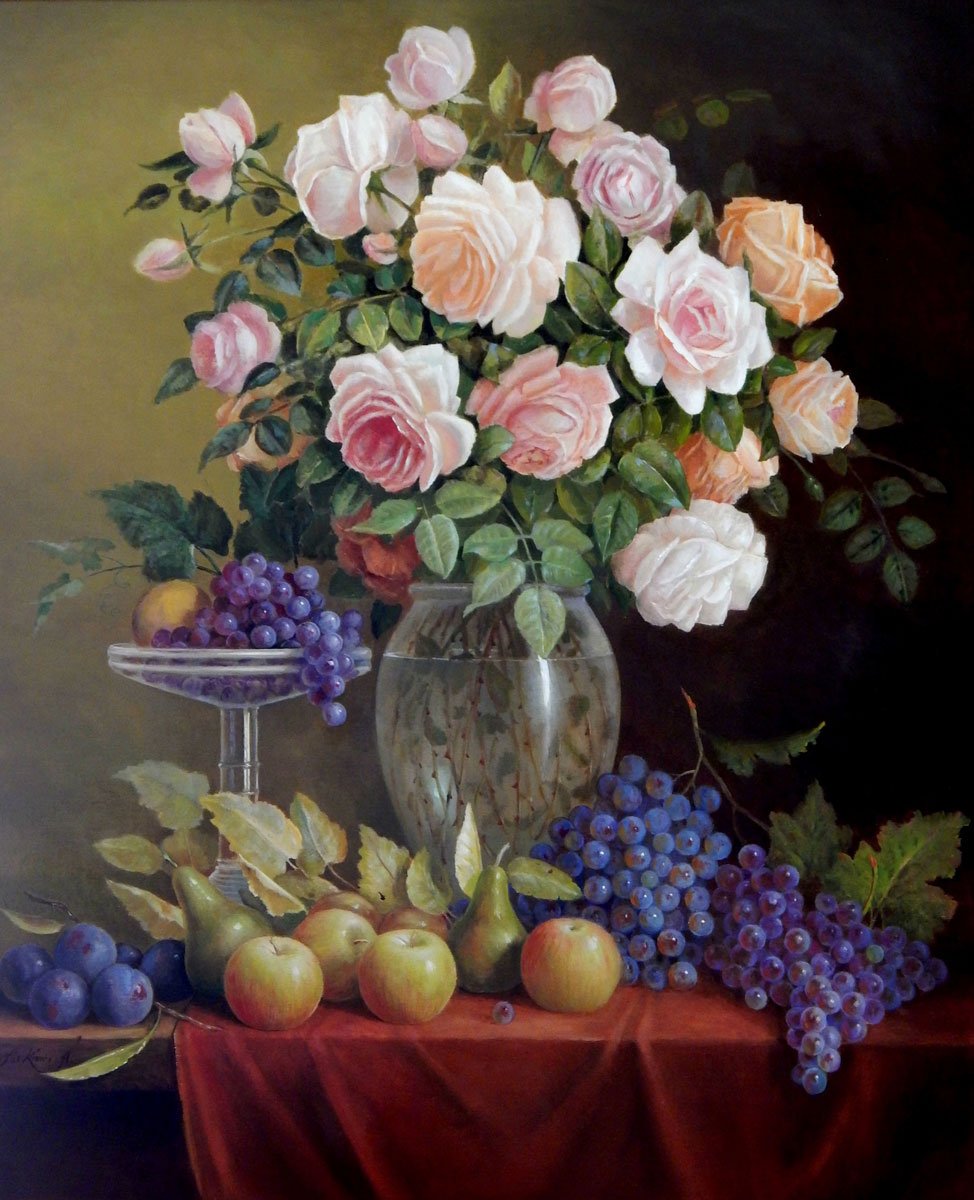 Originally from the Netherlands, Jos Kivits can trace his family back as far as the 13th century in Dutch circles. His paintings are highly accomplished feats of technical skill and romantic wonder. Aimed at those who adore the work of the masters, his neo-classical romantic still life and landscape paintings are a modern take on time-honoured traditions.

Now in semi-retirement, Jos lives a happy life in Queensland where he paints sumptuous scenes of fruits, florals and the landscapes of his European youth. Each artwork that Jos creates is unique, with its own flaws like a hand-knotted Persian carpet. You’ll find no prints among Jos’s work, only one-of-a-kind originals completed to the highest standard. Award-winning artist Natasha Junmanee creates stunning still life and floral paintings in her Sydney studio. Using rich colour and with a strong interplay of light and shadow, her works capture a depth of realism that is hard to match. Over the last few years, her work has proven hugely popular with collectors and even appeared in the 2019 season of The Block.

Natasha’s work incorporates “symbolic objects depicting the beauty of stillness, memory and transience”. Each work is created with the intention to capture beauty through colour and composition, while provoking thought on cultures, philosophies, place and time. Indulge in nostalgia with Donovan Christie‘s highly detailed streetscapes. With a proclivity for fast food icons, retro shopfronts and iconic brands, Donovan’s work always triggers a zing of familiarity. In 2016 the Adelaide artist won the Channel 9 Young Achiever Award and has since gone on to be a finalist in many notable prizes, including the Waterhouse Art Prize and the Lethbridge 10000.

Donovan says of his approach to art and life: “I so frequently find myself standing still and appreciating things that people take for granted in life. I like to focus on the human interaction (or lack there of) with these things. This outlook makes me an avid admirer of people, architecture and urban landscapes in particular.

“The majority of my pieces are very vacant scenes with no sign of people, this leaves it up to the viewer to make their own interpretation of the image. Many of my paintings invoke a sense of belonging and you can place yourself in the picture and remember a time when…” Brooke Walker creates artworks for a cause. A passionate conservationist, all Brooke’s highly realistic paintings draw attention to the plight of endangered species and the effect human consumption is having on their environments. Brooke explains, “I have always had a great love of animals and nature, stemming back to my childhood on a hobby farm in McLaren Vale. As an adult I am now greatly concerned in the conservation of wildlife and their habitat throughout not only Australia but also the world. I feel more needs to be done to preserve these great creatures for future generations. I would like to use my art to subtly educate people on the decline of our great animal species and donate part proceeds of the sale of any work to an animal conservation organisation.” Kim Leutwyler has been recognised for her skill and creativity with a brush in many of Australia’s top prizes.

A name commonly found in the most notable portrait prizes in Australia, Kim Leutwyler has the accolades to match her skill with a brush. Arriving in Australia in 2012 from the US, Kim has fast made a splash on the scene with her colourful portraits celebrating queer culture. Painting everyone from actors to sports stars (and even someone closer to the Bluethumb team – stay tuned!), her powerful and technically accomplished work has drawn appreciation from all walks of life. Perhaps the most notable notches in her painter’s belt are Kim’s multiple successes as a finalist in the Archibald, Portia Geach and Black Swan prizes. A bit of an Australian legend, Robert Hagan is one of Australia’s top impressionist painters. Internationally renowned, Robert made a name for himself in the US when he was awarded the America’s Cup International Artist Gold Medal and produced DiscoveryHD’s ‘A Splash of Colour’. Combining the romantic tendencies of impressionist art with typical Australian bush scenes inspired by his days as a jackaroo, his work bring quintessential Aussie flavours to the world. For fans of Australiana, you can’t go past his stunning highly-skilled paintings which cement his place as one of the best technical masters.

Haven’t had enough of our technical masters? Browse award-winning art with our Portrait Prize finalists curation.