If you’ve ever shared your home with a pet you will know the enchantment and amusement an animal can bring to your life. Throughout history and across civilisations, animals have been represented in art – for their beauty, to tell stories, or to worship the powers they were believed to hold. The bond and fascination between humans and animals is both timeless and universal, and caring for a pet also offers therapeutic benefits that improve quality of life. It’s therefore not surprising that animals are frequent features in many artists’ studios, offering unconditional companionship as well as artistic inspiration. Here are some famous artists in the company of the animals they loved and admired and some of the art they inspired. Famous for his bizarre and highly imaginative paintings, Spanish Surrealist artist, Salvador Dali (1904 – 1989) was also well known for his eccentricity and attention-seeking behaviours that are well illustrated by his choice of animal companion. Although the giant anteater he was seen taking for a walk in Paris was probably not his pet, Dali had a particular affinity for giant anteaters. His affection for these enigmatic creatures is believed to originate from a poem written by his friend and founder of the Surrealist movement, André Breton, entitled “Apres le grand tamanoir” that translates to “After the giant anteater”. In 1930, Dali created a bookplate for Breton which he named “Andre Breton le tamanoir” giving rise to a nickname that was to remain with Breton until after his death in 1966. 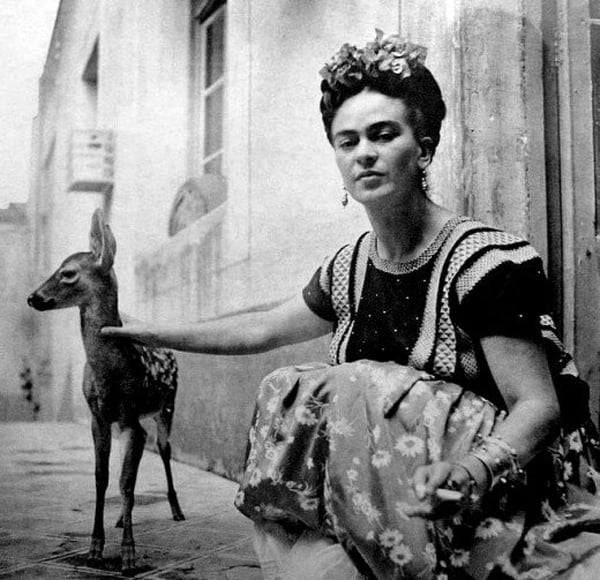 Well known for her self-portraits, Frida once said “I paint myself because I’m so often alone and I am the subject I know best”. Perhaps this is why she so often painted herself surrounded by her animal companions. Frida Kahlo at Casa Azul, Mexico City, 1951 with one of her pet parrots    Source: anothermag.com Swiss-German artist Paul Klee’s (1879 – 1940) highly individual style was influenced by movements including Expressionism, Cubism and Surrealism. His dry humour and childlike perspective were frequently reflected in his paintings, along with his love of cats. Legendary Spanish artist, Pablo Picasso (1881 – 1973) is undoubtedly one of the most influential artists of the 20th Century. Time Magazine art critic Robert Hughes once commented “There was scarcely a 20th century (artistic) movement that he didn’t inspire, contribute to, or in the case of Cubism…co-invent”. Prolific in output throughout his long life, Picasso drew inspiration form many sources including the owl, a symbol of wisdom and an effective predator. American 20th Century art world phenomenon, Andy Warhol (1928 – 1987) was a leading figure in the Pop Art movement that flourished in the 60’s. While his work primarily drew inspiration from, and made comment on, commercial and celebrity culture, by the 70’s his beloved pet daschund, Archie was also the subject of his art and an inseparable companion. Lucian Freud holding a sparrowhawk in his studio (1947)     Source: tumblr.com

Renowned for his psychologically penetrating portrait and figure paintings rendered with thick impasto, Lucian Michael Freud OM CH (1922 – 2011) is widely considered one of the leading British artists of his time.  Animals were frequently featured in Freud’s compositions, often alongside their owners.  It is unclear if Freud kept a sparrowhawk as a pet but it is clear that he had a particular affinity with them that spanned at least fifty years. Lucian Freud with a sparrowhawk in London taken in the last ten years of his life     Source:  telegraph.co.uk Photo by David Dawson

The art of healing: how to choose art for doctors and dentists’ surgeries