Behind the Bonsai: Amanda Krantz Interview

What exactly is the magic that makes bonsai trees? Their twisted and gnarled branches; their small surface roots or the artistry that it takes to grow a mature plant to miniature scale? Since a young age and her first screening of the Karate Kid, Amanda Krantz has been captivated by these phenomenal plants – so much so that she devoted a series of artworks exploring them further. Prior to recently listing these artworks on Bluethumb, Amanda held a one-night-only exhibition displaying all eleven of her creations, inspired by the age-old Japanese art form. We spoke with Amanda at the event to hear a little more about the roots of this exhibition, the artworks and the artist herself. Amanda Krantz’s evolution as an artist spans from the beginning of the online art world in 2000. Armed with a Bachelors in visual arts and working long hours in a live music venue in the meantime, creating work started as a struggle. “When that music venue closed down, I had more time on my hands, and I knew I wanted to give painting a shot (though I had low expectations).” Fast-forward a few years to 2003 – eBay is opening up to the art market, and that’s ultimately where Amanda  starts her journey. “I came to find the best method to drive interest in my work was to list them as $1 auctions and thus allow the market determine their worth. I had paintings go under the hammer for thousands, but I also had some go for $80, and one even went for $13.50! I have to say though, it was a great way to improve my craft, and learn the ins-and-outs of working with global freight systems, and selling work on the internet in general. Over time, I have been lucky to meet many of the people who supported me in those early years, and I’m so grateful for them, as I would never have been able to continue in this field. Quite frankly, I don’t think I would have been able to create enough work to get any good at it.” Amanda’s piece Mono no Aware 3 has an untranslatable title; in Japanese it refers to the melancholic appreciation of the transience of life and things

Since the first milestone, Amanda has acquired skills from residencies in several countries, such as Thailand, Tasmania and Japan, and has continued studying in Melbourne to keep informing her practice. Regardless, assuming that these residencies acted as a catalyst for the subject matter of her work would be a mistake. “I think travelling has informed my work, but probably not in the ways that are most obvious. I mean, I tend to take up residency in places that I already find interesting, and I’m often already painting the places or things from that place.  However, the overall experience of a new place, and a new culture, has a subliminal but important role in the journey of the work. For example, I was painting bonsai prior to going to Japan, but the bonsai works now hold a certain spirit or flavour that is not consciously painted, and I’m sure is only there due to the experience of the place and culture. It’s not something you can pin point, really, but it’s fascinating.” It was easy to get lost in the details of these bonsais!

Early into her career, Amanda established herself as a “fluid artist”, yet there is always an element of control and manipulation steering her work, making the finished piece unique. “I was more interested in what “nature” could create when I threw paint, or allowed it to pool, or let gravity have its way. When working, I have an idea of what I want to achieve, but I work with the nature of paint to create something far more interesting than what I could paint on my own. This, I realised, is like what it is to grow a bonsai. The grower gives the tree some parameters, in the form of a pot and tree style and shape, but it is the tree that does the work.” The realm of fluid effect in Amanda’s artwork goes perfectly with the use of acrylic paint. “I started out using oils, but made the switch to acrylics about 12 years ago when I discovered their versatility. It was around the time that paint technology was advancing and companies such as Golden, Matisse and Liquitex had begun releasing an array of media. Globally, artists started to experiment with these – that’s when things really got fun!” 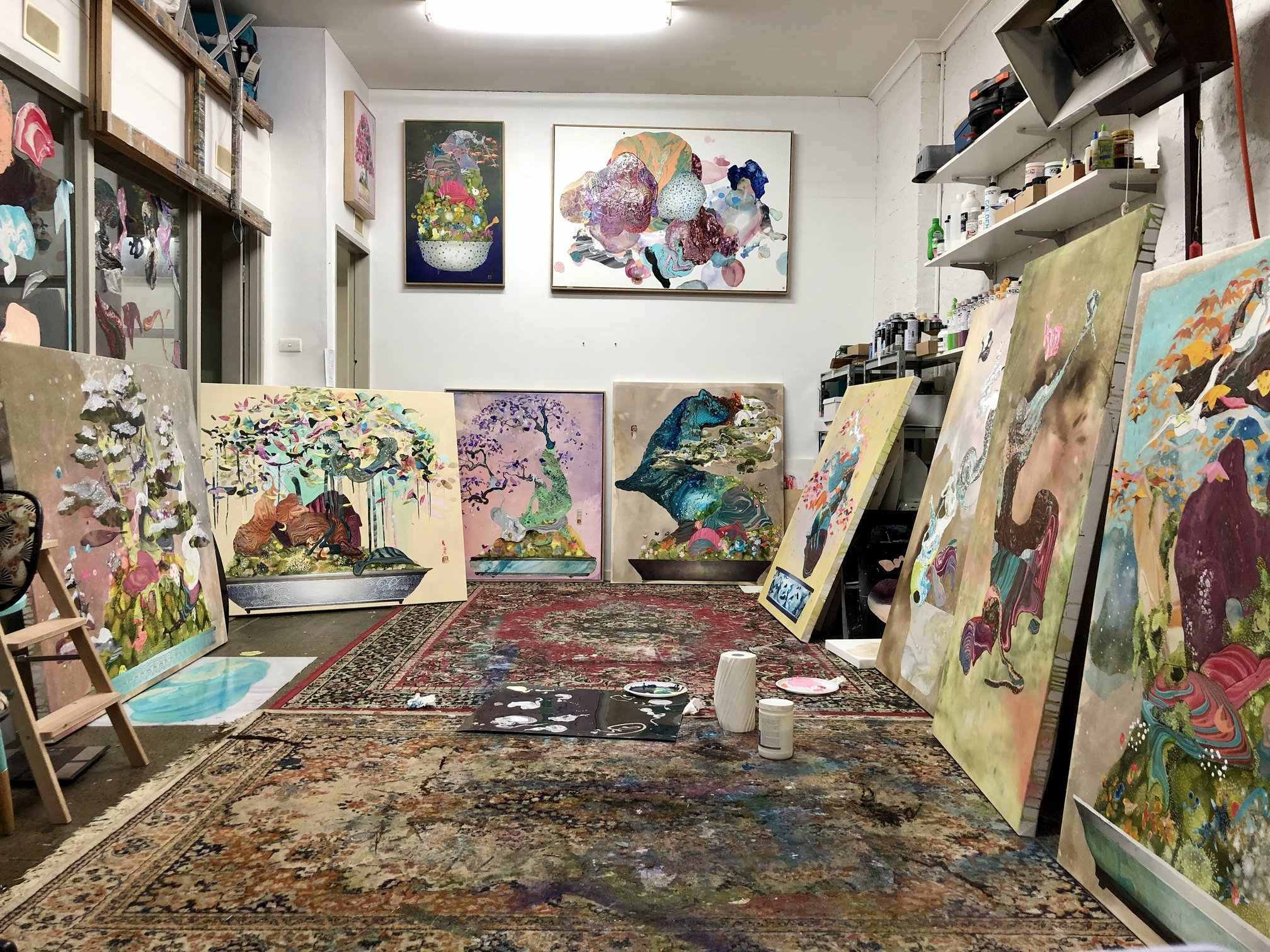 Amanda’s love of bonsai trees goes way back to her earliest memories. “Their mystifying qualities were intensified by the Karate Kid movies with Mr Miyagi, the master of all things to the then 5 year-old me, taking extreme care in the pruning of his bonsai trees. This was a man who could catch flies with chopsticks, so growing a bonsai was clearly reserved for those with special powers.” “I learned about bonsai by reading every English language book and article I could find. This was a pre-internet era, so that wasn’t too great a feat. I took a crack at growing them myself, not really understanding the effect of the harsher climatic conditions that Brisbane would have on the trees I had learned about and loved (aka Japanese Maple). I eventually had some luck with a Moreton Bay fig, but then I became too transient to hold down a garden of any sort. It wasn’t until well into a career of painting that I thought I could combine the two passions, and it was through the act of painting them that I understood so much more.” Amanda Krantz has an impressive resumé of exhibitions and prizes under her belt that consistently exercise professionalism, personality and a sense of creative control; set in the history-steeped Meat Market Stables of North Melbourne, the Big Bonsai Painting Show was a one-time event that put all of these attributes into practice. Attention to detail, such as precise use of lighting and space, allowed Amanda’s artwork to speak volumes and were well-received by all who visited. As the series is described to be informed by Daoist principles, being in a physical space with the artworks gave further insight to this aspect of philosophy. “When a bonsai grower chooses a young tree to create a bonsai, she looks for the shape and potential that is already there. And as the tree grows, the tree grants her choices as to which direction or shape to form. This is the philosophy of the Dao, or the Way. Similarly, each bonsai painting I create is with multiple layers whereby each layer informs the next. While this was a one-off, one-night-only event, Amanda is planning to return to abstraction to find a new direction with her work. Browse her extensive collection here.