Matty Smith on Life Beneath the Surface

Growing up in the UK, photographer Matty Smith recalls spending childhood summers snorkelling the Mediterranean. His summer hobby soon developed into a lifelong passion for diving and photography, which he followed all the way to Australia’s eastern coast in 2007. Since his earliest memories of splashing around, Matty has been captivated by the wonders beneath the ocean’s surface.

“Underwater photography allows me to visually communicate to the viewer the majestic feelings of scuba diving,” explains Matty, “and the incredible interactions between myself and rarely seen creatures of our oceans in their natural habitat. I want to generate a compassion in people of how wonderful our seas are and how important it is to treat them with respect.” 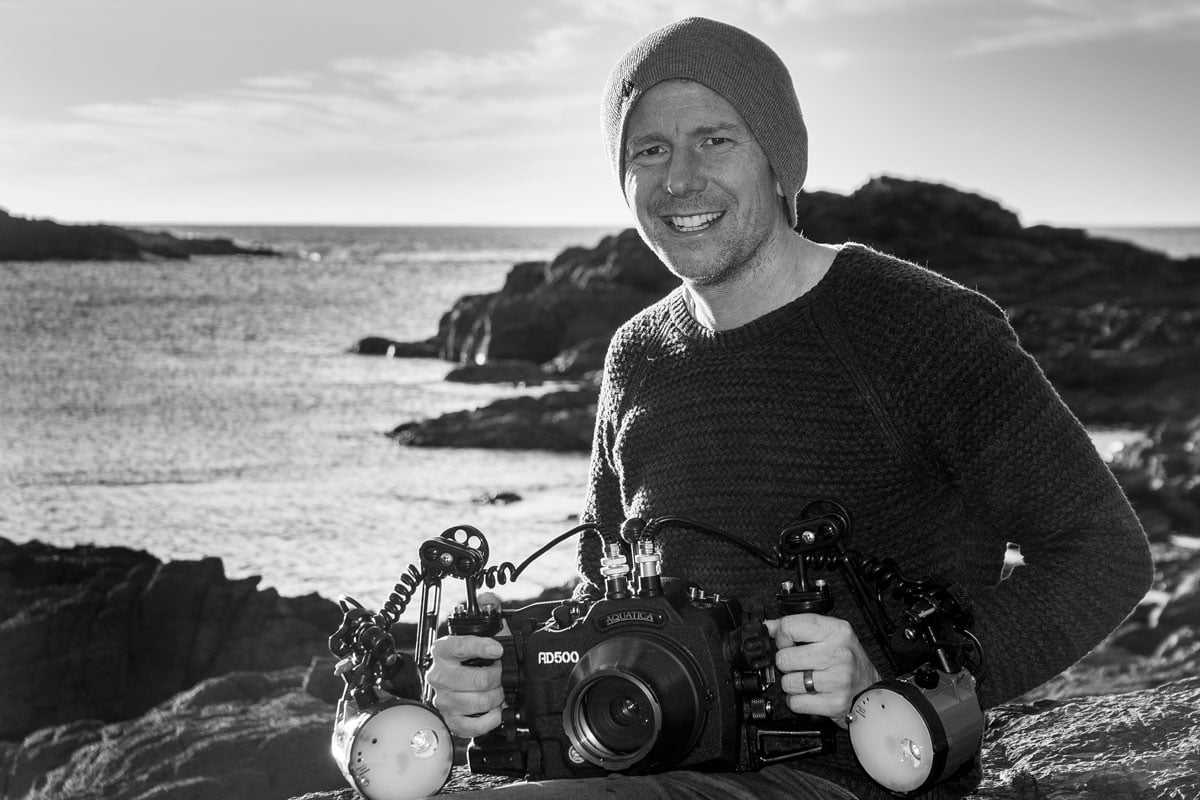 It’s been a lifetime of love for the ocean for photographer Matty Smith. Photographing his passion requires a pretty intense set-up – with specialist lighting and a sturdy waterproof casing for his trusty Nikon camera.

“For me one of the most wondrous parts of any dive is the moment that the water engulfs my mask as my head slips below the surface. I think it’s the suspense of the unknown of what lies beneath, the transitional part of moving from one element to the next that feels so magical and the thought of what alien creatures I might encounter.”

Matty transports others to his magical world with his signature half-over, half-under photographs. These stunning images take incredible skill to perfect and Matty has devoted years to honing his technique. Underwater photography requires a lot of specialist equipment as well as practice –  between the protective waterproof housing for his Nikon D850, specialised lights and scuba diving equipment, it’s an expensive passion. But Matty wouldn’t give it up for the world. In fact, Matty followed his passion all the way to Australia’s sunny shores, where diving opportunities abound. Matty loves being close to a variety of underwater subjects. “I have the opportunity to hone my style every day in my own backyard so to speak. And practice is key – evolution only comes about by repetitive familiarity and practice. Moving to Australia was the step I needed if I was to feed my creative obsession.”

Diving has put Matty into some pretty unique and unsettling situations. “I’m not sure if I’ve shot anywhere that could be considered weird, but I guess being in the water nose to nose with a 2.5 meter saltwater croc in a mangrove 60 miles off the coast of Cuba wouldn’t be everyone’s cup of tea. That was an interesting day!”

“The underwater diversity of life, colour and geometry of the Coral Triangle is a must see for any diver. The Coral Triangle is an area on the map that covers Indonesia and Papua to the western tip, The Solomon Islands to the eastern tip and the Philippines to its northern most tip. It’s the most biodiverse marine environment on the planet and a sight to behold!” “I feel it’s very important and also really enjoy showing people the treasures we have in our oceans, how fragile they are and the importance of protecting them. I like to use my skills as an underwater photographer to try to amaze and educate.”

Matty draws inspiration from his family and notable marine photographers, describing his work as a “melting pot” of them all. “Firstly it would have to be my Mum and Dad for their early encouragement and for introducing me to the ocean. Photographically up there would be David Doubilet, the grand master of over/under photography, Alex Mustard for his innovative and progressive style, Michael Aw for pushing the boundaries of photography, exploration & opportunity and Tim McKenna whose surf photography first captured my imagination as a young photographer.” With many awards and accolades to his name, there’s no doubt that Matty’s style holds its own now. In recent years he has been a finalist in or won prestigious wildlife photography awards such as Australian Geographic’s Nature Photographer of the Year, BBC’s Wildlife Photographer of the Year and Ocean Geographic Pictures of the Year. The recognition these awards gained him has opened the doors to many unique opportunities and really helped progress his career – for example, he is now an ambassador for Nikon.

“They are all highly regarded awards in the world of natural history photography and quite critically judged. Photoshopping is not allowed in those awards so it’s a level playing field and you’re judged on pure photographic merit, so doing well in those holds a bit of kudos. And I believe it’s the way it should be –  there isn’t a lot of post processing going into my images anyway so I’m not bothered about competing in photoshop competitions.” Matty Smith is privy to some spectacular sights beneath the ocean’s surface.

When he’s not submerged underwater, you can find Matty grabbing coffee with his florist wife Lauren or keeping in shape. One thing you’ll never catch him doing is eating calamari – at least not since he met an adorable juvenile squid on one of his dives!

Matty also has a long list of places he’s yet to visit and hopes to see in the future. “The first three that spring to mind are the Sardine Run in South Africa, The Galapagos and Antarctica. The Sardine Run is considered by many, including Sir David Attenborough, as the greatest show on Earth. Once a year around June cold currents push massive shoals of sardines up the east coast of South Africa and along with them an ensemble of ocean predators such as sharks, dolphins, whales, seals, mermaids! You name it, all feasting on the dense gatherings of sardines, it looks amazing!” While it may not be the most lucrative job, it’s certainly a lot of wild fun!

But what’s coming up in the not-so-distant future? “Well, next week I’m heading off to Cocos Island Costa Rica with my wife Lauren. Cocos lies 300 nautical miles off the west coast of Costa Rica and is often referred to as “Shark Mountain” It’s a sea mount that rises from the sea bed thousands of meters below and its peak breaks the surface. There isn’t much on the island other than rainforest so we’ll be calling our boat “The Argo” home for 10 days. It gets its nickname as one of the sharkiest dives on the planet for good reason. We’ll encounter (hopefully) huge aggregations of hammerheads, Tiger sharks, white and silver tips, Galapagos sharks (the Galapagos Islands are relatively close) Silky Sharks and if we’re really lucky the giant whale sharks. It’s going to be a photothon!

“Early next year I’m back to Papua New Guinea to shoot hawksbill turtle hatchlings as they hatch on Lissenung Island. March it’s off the Manado for the Ocean Geographic mag “Celebrate the Sea” Festival and underwater shoot out. Then in June I’ve chartered a live aboard dive boat in the Solomons for 10 days of underwater photography tutorials with booking clients. And finally I’m going to West Papua again with Ocean Geographic in October to shoot a photo project known as “Elysium” on the Coral Triangle. In between there may be other opportunities pop up but they are the locked in definite for now!”