Gillie and Marc’s Mission to Save the Northern White Rhino

19 March 2018 marked the loss of the last male northern white rhino on the planet, Sudan. The event not only left a huge imprint in history, but shook many people to the core. Two internationally-renowned Bluethumb artists, Gillie and Marc, felt this loss intensely, having launched a sculpture in Sudan’s family image entitled “The Last Three” just four days prior. With a shared vision in mind, iconic duo Gillie and Marc have created a legacy of Sudan and his species with their most recent, highly anticipated sculpture. Republica is the new home for Gillie and Marc‘s sculpture, The Wonderful Two.

Located on the foreshore of St. Kilda, just outside Melbourne’s emblematic restaurant Republica, lies arguably the most important rhino sculpture in history, The Wonderful Two. The sculpture features mother and daughter, Najin and Fatu, the two remaining northern white rhinos. “We had the last sculpture [The Last Three] in New York and were looking for a home for the Wonderful Two, and we thought it should be in Australia since we live in New York and Australia,” Marc explains. “The managers at Republica are both environmentally conscious and are very much into art and causes, so it made sense to approach them for this project.” The sculpture opening was a huge success, with both event attendees and curious beach-goers taking in the esplanade’s new residents.

While the pair have produced an extensive amount of quality paintings, they mainly choose to work in bronze to produce their prominent sculptures, such as The Wonderful Two, as a way of promoting an element of interaction between the piece and the viewer. “This way, they’re built to last,” explains Gillie. “What’s different about our work is that we want everyone to interact with it. The whole point of what we’re doing is that you can learn about these animals, and if you can’t go see them in the flesh, at least you can do so here. We want people to come up and touch them because that’s all part of the experience.” 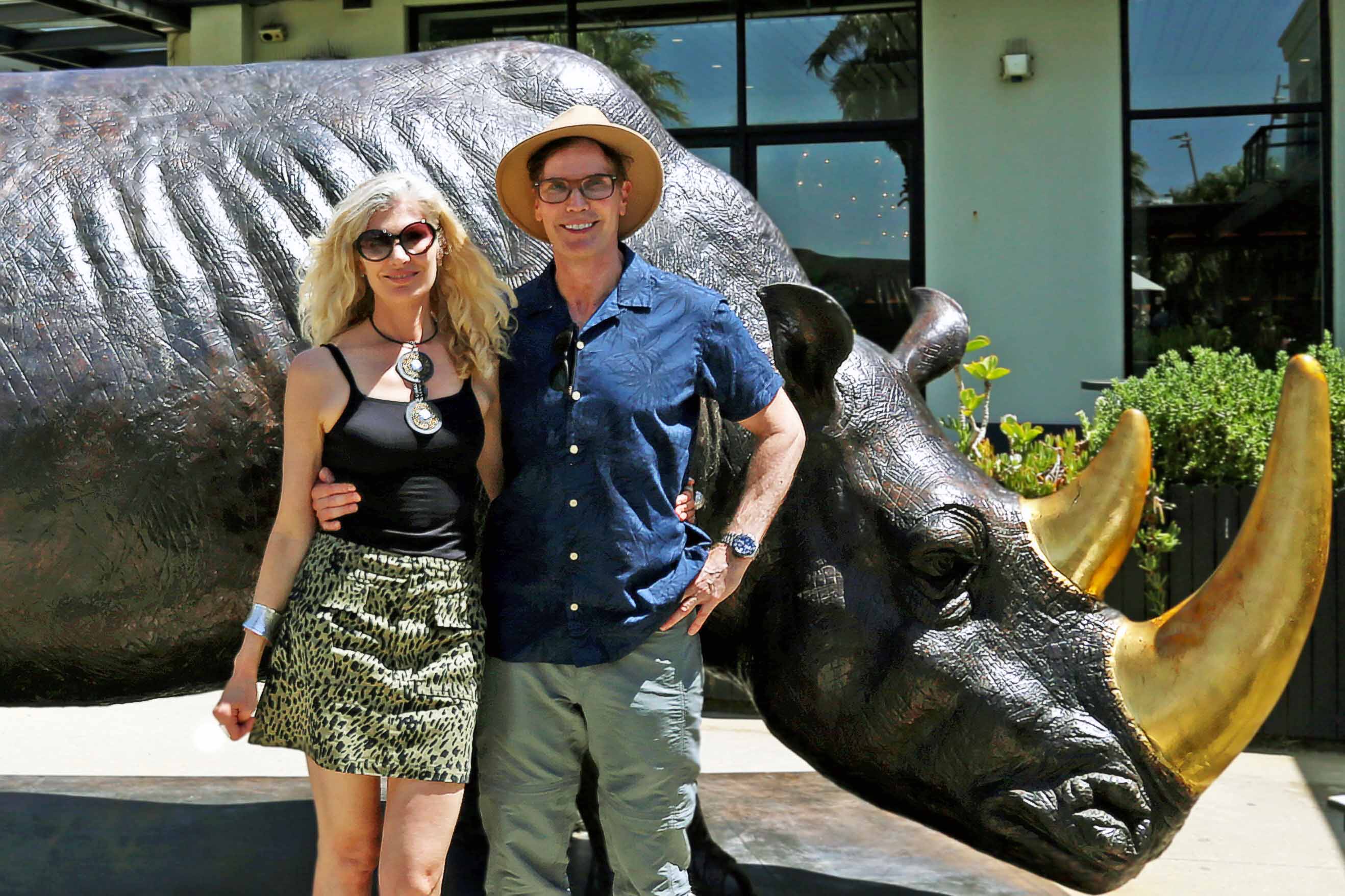 Bluethumb artists Gillie and Marc welcomed all to interact with The Wonderful Two at their sculpture opening.

As a large amount of people are unaware of the northern white rhino sub-species, The Wonderful Two will undoubtedly encourage awareness and educate anyone that comes across the sculpture. “Of course, the key is education and awareness, but we really believe that going across to Africa is also very important, as tourism can really fuel the economy,” Gillie says. “If the economy is driven by tourists that are there to see these endangered species, there is suddenly a value in keeping these endangered species protected.”

The Wonderful Two is the most recent sculpture in a collection belonging to Love The Last, a worldwide project with a mission to create connections between people and endangered species by bringing their bronze forms to urban environments. “One of the most important aspects of Love The Last is that we wanted real animals to be the subjects of the pieces – ones that we’d met and encountered before. It’s important that people can be personal with the sculptures. The Wonderful Two, for instance, features two alive and living rhinos that are mother and daughter.” For this particular sculpture, Gillie and Marc spent time at Ol Pejeta Conservancy, where the two rhinos currently reside. Despite the choice of real subjects, The Wonderful Two also incorporates an element of surrealism, by joining the mother and daughter together and symbolising their worth with golden horns. “It’s still art after all, and we wanted to create a sense of intrigue in passers-by.” A passer-by learns about The Wonderful Two and their incredible story.

Much of the work in Gillie and Marc’s Bluethumb portfolio currently focuses on sculpture paintings, which use subjects from other projects. One of these projects, Travel Everywhere With Love, a central feature in their portfolio, explores themes of unity, love and acceptance. Two main subjects dominate this project: a rabbit and a dog. “The idea is that the dog would probably be eating the rabbit in the wild,” describes Marc. “Using them in relationships can show that no matter what race, religion, sex or gender, everyone is able to love.” They Planned To Have a Quiet One At Home…: A playfully romantic piece by Gillie and Marc.

Across the countless works in the pair’s name, no matter what the underlying theme, there is always an element of fun and optimism. “The humour seen in Travel Everywhere With Love, even though it focuses on something quite serious, can also be found in our conservation project as well. We keep our titles humorous and with a touch of positivity. Even in tragedy, we try to turn things positive. Negativity never gets you anywhere.” Browse ‘the most loving art in the world’ in Gillie and Marc’s portfolio here.

What Is Art Therapy?