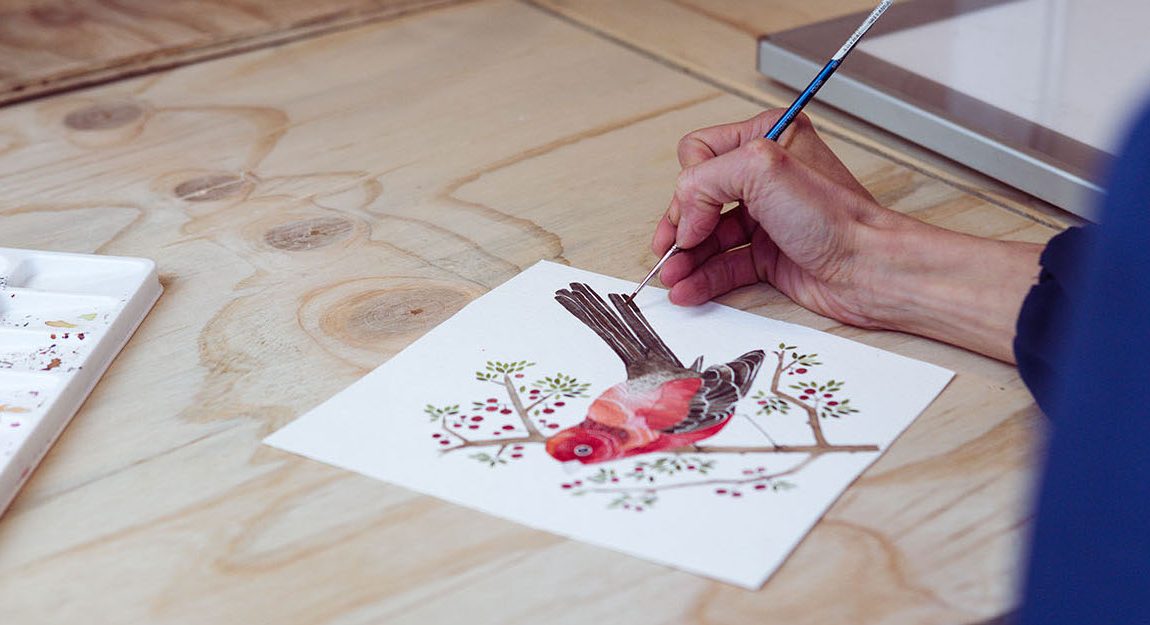 With a studio to match the scale of her work, Daniella Germain clearly has a taste for tiny things. When discussing her choice to work miniature, she explains “I’m small, my studio is small, my works are small”. It’s a harmonious arrangement. Despite being tiny, there’s still a surprising amount of room in Daniella’s studio.

There’s little need for more room in Daniella’s studio, as her gorgeous, miniature space is surprisingly roomy. She has a large desk space to work on and more than enough room for her computer. There’s also plenty of natural light streaming through the glass windows and doors. The studio was custom built by her husband, and is nestled amongst the bushes in their backyard. Daniella has two affectionate dogs to distract her.

Based in Melbourne, Daniella has a fascination with the country-living lifestyle. Her small, detailed works often depict country farmhouses and wildlife. “I love drawing little houses that you see along the roadside,” she says, as well as “just little everyday things.” Native birds also feature heavily in her work. Birds are a common theme  in Daniella’s work

Daniella works commercially as a graphic designer, and in her final year of study at RMIT, she wrote and illustrated a cookbook of her grandmother’s recipes. It’s called My Abuela’s Table. All the recipes come from her family and their life in Mexico. Both of Daniella’s cookbooks

A couple of years later, she wrote and illustrated a follow-up about her grandfather – My Abuelo’s Mexican Feast. This one is available for purchase from Readings. One of Daniella’s pieces, Into the Woods.

Primarily, Daniella works in watercolours, although in the past she has also used acrylics. “I can overwork an acrylic painting… with watercolour it is what it is once it’s on the paper.” Going forward, she’s exploring working in gouache. After working extensively in watercolour, she finds gouache “a bit hard to master.” While she nevertheless enjoys the process, she still prefers “working in watercolours and adding fine ink detail.” Daniella at work with her watercolours.

Keeping her work on a small scale is a choice that Daniella has stuck to. She enjoys putting lots of fine detail into each piece, and says “bigger pieces kind of intimidate me.” However, they’re not written off completely. “Maybe one day,” she says with a laugh. Her display shelf in the studio, featuring a few of her watercolours.

You can find Daniella’s work on her Bluethumb profile. Below, watch the video interview in full!

Win Christmas this Year with a Truly Unique Gift