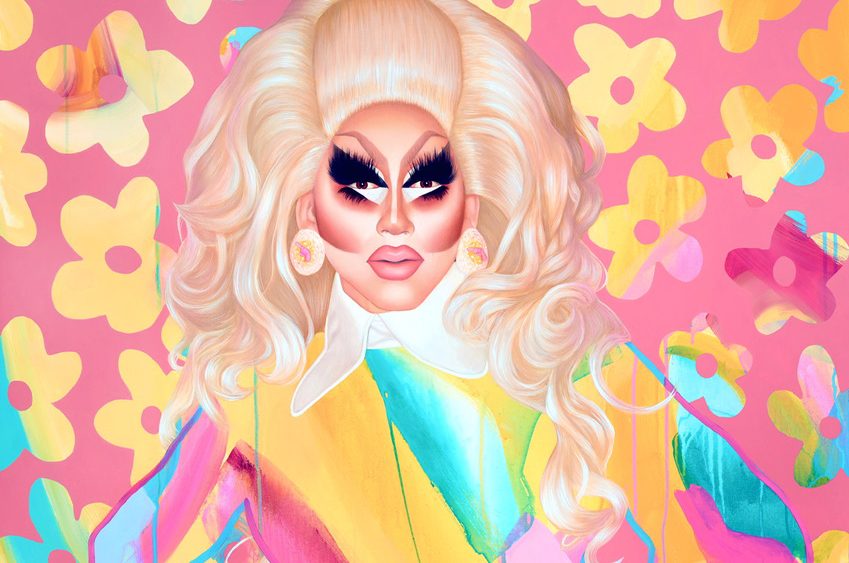 The finalists for the 2019 Portia Geach Memorial award have just been announced and we’re thrilled that 6 Bluethumb artists are among them. The $30,000 award is a highlight of the arts calendar, notable both for its prestige and for the platform it gives female artists. Honouring Australia’s best female portrait artists, the entries are “portraits painted from life of some man or woman distinguished in Art, Letters or the Sciences by any female artist resident in Australia during the twelve months preceding the closing date for entries”.

The annual prize began in 1961, founded by the will of Florence Kate Geach as a tribute to her sister Portia (1873 – 1959), a talented artist who struggled with male-domination in the arts. Portia Geach was an inspiring figure of the suffrage movement, and later became the president of the Federated Association of Australian Housewives. With such a namesake for the prize, it’s no wonder it attracts Australia’s top female artists. In fact, the prize is often referred to as the female Archibald!

This year we’re proud to have 6 artists named as finalists. We’d like to offer our congratulations to Kim Leutwyler, Loribelle Spirovski, Leigha White, Sally Robinson, Brenda Runnegar and Deborah Walker for their success in the 2019 Portia Geach. The finalists’ works will be on display at the S.H. Ervin Gallery in Sydney from August 2 – September 15, and the winner will be announced on opening night. Good luck to all the finalists! For the 4th time, Kim is thrilled to be a finalist in this notable award. The Sydney-based artist is known for her bright portraits of LGBTQIA-identified and allied people, and when she saw Trixie Mattel was coming to Sydney, she jumped at the chance for a sitting. “I remember seeing Trixie and Katya’s insane YouTube web series ‘UNHhhh’ for the first time…I thought I was having an acid flashback,” Leutwyler explains. “The combination of the queens’ crazy humor and the meme-worthy editing had me rolling on the ground with laughter. I became instantly enamored of Trixie, drawn to her unique brand, cheerful cynicism and her seemingly random ability to play the autoharp. I interpret her Barbie-inspired look as a critique on consumerism coupled with every stereotype of hyper-femininity that society employs to objectify and glorify women,” Leutwyler continues. Trixie Mattel is the stage name of Brian Michael Firkus, the winner of RuPaul’s Drag Race All Stars season 3.

Kim began work on the portrait in March of this year, and the piece took around 1 month to complete. “Our initial sitting for the portrait took place backstage at the Enmore Theatre in Sydney, just before Trixie’s performance of ‘Skinny Legend’, her one-woman music and comedy show. I’ve had the pleasure of painting many notable people and am not one to get starstruck, but Trixie quite literally took my breath away. Standing nearly 7ft tall in her heels and wig, she has a quick wit, a gorgeous Native American jawline and hair for days,” says Leutwyler.

The portrait draws on Trixie’s favourite colours, a combination of Barbie-inspired pinks and bright yellows. After 4 weeks of work, the completed painting is a bold testament to the larger than life character – and is itself, almost as large as life, coming in at 1.5 metres. The Portia Geach Memorial Award holds a special place in Loribelle Spirovski’s heart. This was the first award she was shortlisted by, and 2019 marks her 6th consecutive year as a finalist. Since that first year, Loribelle has reached the finalist stage of a number of prestigious prizes, including the Archibald in 2017, 2018 and 2019.

Loribelle’s entry into this year’s prize is a portrait of her partner, classical pianist Simon Tedeschi. Entitled ‘Homebodies’, the painting is another large scale painting that made it to the finals. Homebodies measures a whopping 183cm x 122cm. I Am Alannah Hill was Leigha’s finalist piece in the 2014 Portia Geach Memorial Award.

Based in central Victoria, Leigha White’s art practice strives to pay no attention to restraint – a philosophy that produces some memorable and intriguing artworks. Leigha has a strong focus on printmaking, but diverges from this with her love of portraiture. She’s been honoured to paint many notable Australians, including fashion designer, Alannah Hill.

2019 is Leigha’s fourth year as a finalist in the Portia Geach. Her entry this year is a portrait of Dr Anne Poelina, the managing director of indigenous not-for-profit Madjulla Incorporated and an environmental champion. Dr Poelina is a Nyikina traditional custodian from the Mardoowarra, and as a PhD researcher has worked on environmental and cultural protection issues in the Kimberley region of WA. A previous winner of the Portia Geach, we’re excited by Sally’s 2019 entry ‘Body in a Box’. An esteemed portrait artist, Sally has won multiple awards and has two paintings in the National Portrait Gallery’s collection – one of cricketer Glenn McGrath and one of Angry Anderson.

In 2012 Sally won the Portia Geach with her portrait of her mother. This year, she has entered with a self-portrait. For the second year in a row, Canberra artist Brenda Runnegar is a finalist in the Portia Geach. Not one to stick solely to portraiture, Brenda has also twice been a finalist in the Eutick Memorial Still Life Award.

An avid traveller, Brenda’s work seeks to examine the natural landscape and its relationships with people, both physically and spiritually. Part of her process involves spending extended periods of time in a new place, and experiencing it from the perspective of resident, visitor and privileged interpreter.

Brenda’s 2019 entry into the Portia Geach is a portrait of Dr Maria Runnegar, Associate Professor Emeritus, University of Southern California. After Durer – Melancholoy by Deborah Walker

With a background rich in exhibitions, prizes and education, Deborah Walker is a formidable figure in the 2019 Portia Geach. She holds a PhD in Metaphysical Art and has lectured at some of Australia’s top universities. In Deborah’s work simple daily rituals such as reading a book are seen through a lingering gaze on her subjects and transform subtlety into something indefinable and dream-like.

Another past finalist in the award, Deborah’s entry into the 2019 Portia Geach is called ‘The Celebration (Compass tragedy)’ and is of arts student and writer Georgia Gibbs.

Best of luck to all of the finalists in the 2019 Portia Geach Memorial Award! Michelle Keighley Interview: Creating Is In My Blood