It’s that time of year again: the much awaited, eagerly anticipated Archibald Prize is upon us! Artists and audiences alike have been keeping their eyes out for the finalists of one of Australia’s oldest and most prestigious art prizes. This year, the team at Bluethumb is delighted to see five of our artists in the running to take home this prominent award! Get first-hand insight into the work of the five Archibald finalists below.

Bridgette McNab is no stranger to esteemed portrait prizes. With a background in graphic still life and a cinematic, theatrical approach to painting, Bridgette’s paintings use a combination of traditional themes in art with contemporary pop culture to create a dynamic, insightful reality in which her subjects live. Through these production pieces, we’ve seen Bridgette rise to high merit as a finalist in various art prizes. 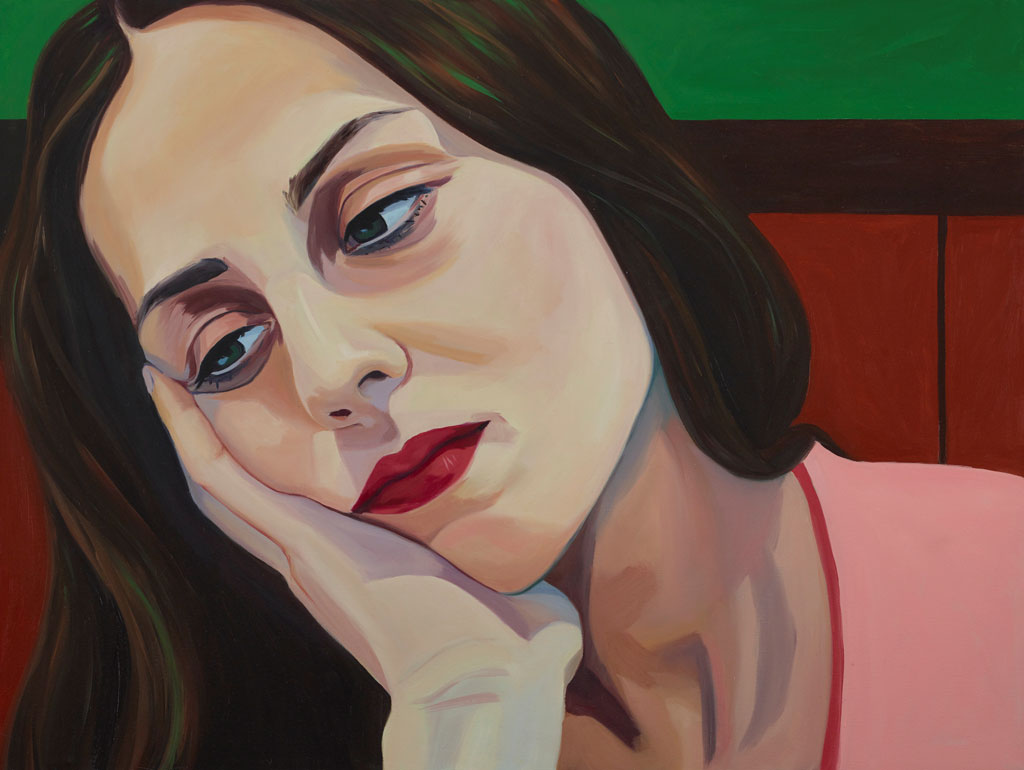 Bridgette’s entry to the Archibald Prize this year was of Australian fashion designer Karla Špetić. “I was first drawn to Karla as a subject as her design aesthetic resonates with my own practice – clean lines, resplendent colours and graphic imagery. The nonchalant dreaminess present in Karla’s work is a quality that I strive to capture within my own work as a painter,” says Bridgette. Karla’s journey from Dubrovnik to Australia as a Croatian refugee in the late 1990s taught the designer a great deal about hardships. As a direct consequence of the emotion Karla carries and breathes into her own work, Bridgette’s portrait reflects Karla’s perceptive nature within the strong, resilient businesswoman she is known as. “The painting stays true to both our modern aesthetics whilst highlighting the aspects of the creative journey that we value most – sincerity, freedom and a love of colour.”

Meet more of the characters in Bridgette’s work here.

While it may not have been the first career she embarked on, Kate Gradwell has fully embraced these past four years as a full-time artist. Her work, diverse and varied, explores styles, media and forms of primarily landscape scenes, but also portraiture and figurative art. “I’m incredibly thrilled to be a finalist in this year’s Archibald Prize. For me, given I have only been painting seriously for the last four years, it’s a particular honour,” Kate shares. Scientist-turned-portrait prize finalist; is there anything Kate Gradwell can’t do?

Kate’s first entry to the Archibald Prize, Yindyamarra, tells the story of Professor Michael McDaniel, a member of the Kalari clan of the Wiradjuri nation of central New South Wales and a key-player in several institutes and programs focussing on Indigenous studies, leadership and engagement. “Yindyamarra is both a Wiradjuri word and a philosophy,” Kate explains. “As a word, it means honour and respect. As a philosophy, it’s the basis of being a mature, balanced human being. It encourages living life honourably, respectfully and generously. It requires mindfulness of behaviour. Those who know Michael understand that Yindyamarra is at the heart of his gracious, considered, yet determined approach to leadership.” Kate has painted Michael wearing a possum-skin cloaks adorned with various designs. These cloaks are of enormous cultural significance to the Aboriginal people of south-east Australia. “Only five original cloaks remain in the world,” Kate points out. “Michael, one of the few contemporary creators, is pictured wearing a cloak he made for his daughter.” 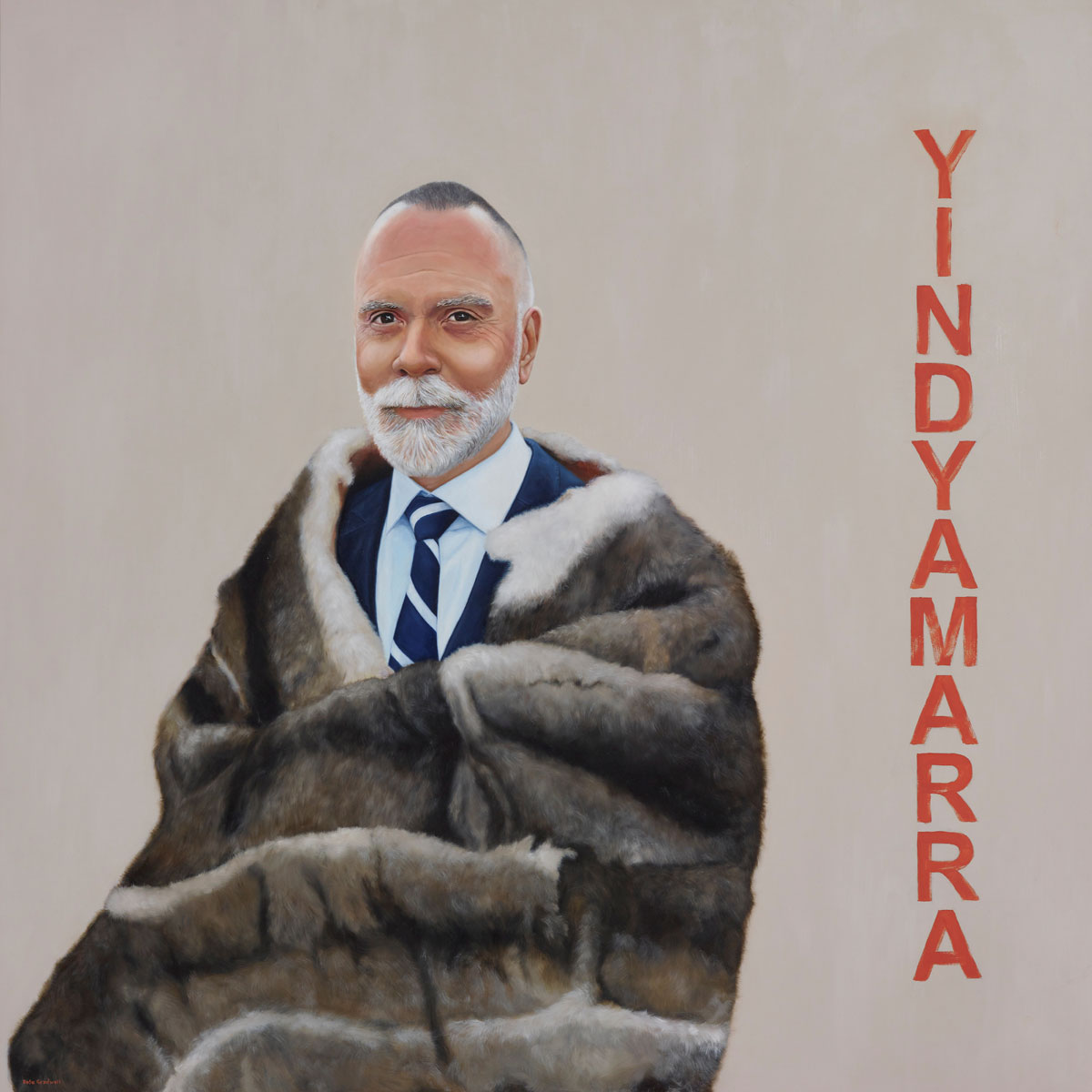 Yindyamarra: a portrait of Professor Michael McDaniel shows the pro-vice chancellor of Indigenous leadership and engagement at the University of Technology Sydney, and chairperson of the Australian Institute of Aboriginal and Torres Strait Islander Studies.

Explore Kate’s other artworks on her Bluethumb profile here.

Kendal Gear‘s impressive emergence into the art world is evident from her running streak as a finalist in portraiture prizes over the past couple of years. It seems only natural, then, that she would end up an Archibald Prize finalist this year. While keeping a relatively low profile, Kendal’s work is known to speak volumes, and is often said to be “capturing a beautiful moment in time”.

Kendal Gear’s painting for this year’s award is part of a series of self-portraits. The different spaces that play a part in her life are observed in the series and have been chosen for their reference to the value of women in society. ‘The setting of the kitchen and the ornaments on the windowsill were used to denote themes of domesticity, femininity, sexualisation and maternity,” says Kendal. “From leftover remnants of long-gone stereotypes, to attitudes within sections of contemporary popular culture, I’ve noticed how some ideals and gender biases have unconsciously permeated my identity and self-worth up to now.” 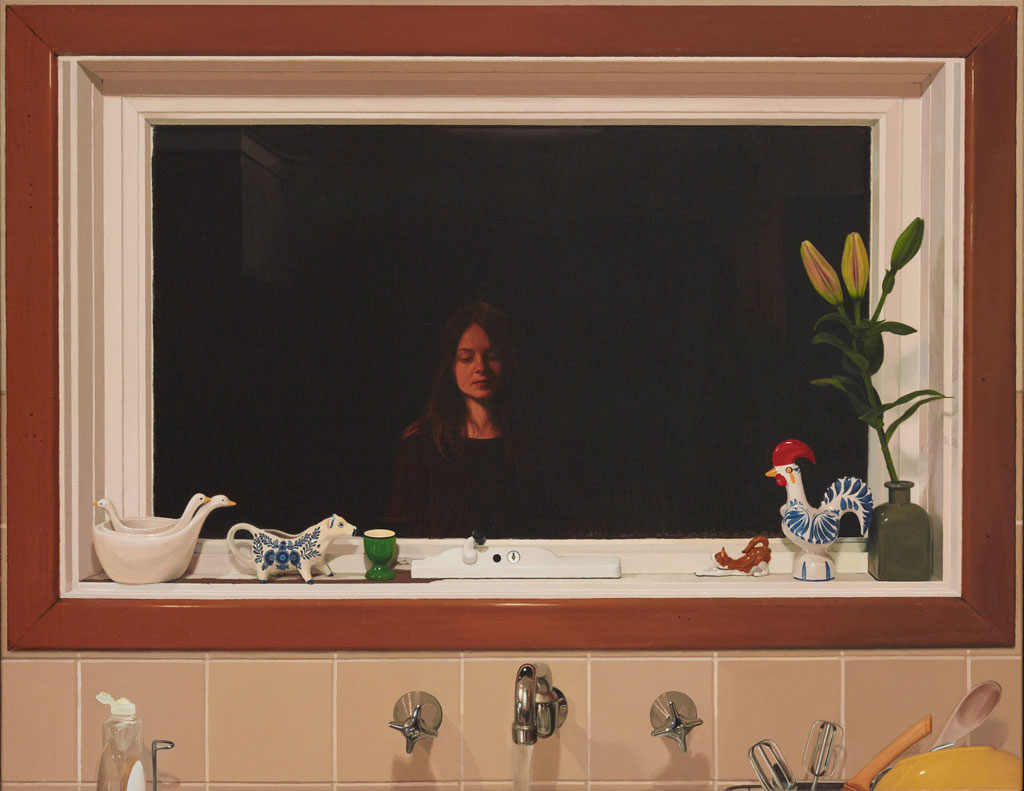 Self-portrait by Kendal Gear employs symbols of femininity and domesticity to explore the role of women in society.

Filipino-born Loribelle Spirovski has risen to international acclaim through her artistic creations. Her work, described as her ‘escape and fortitude against the personal challenges experienced as a migrant’ are a product of Loribelle’s adaptation to life in Australia. 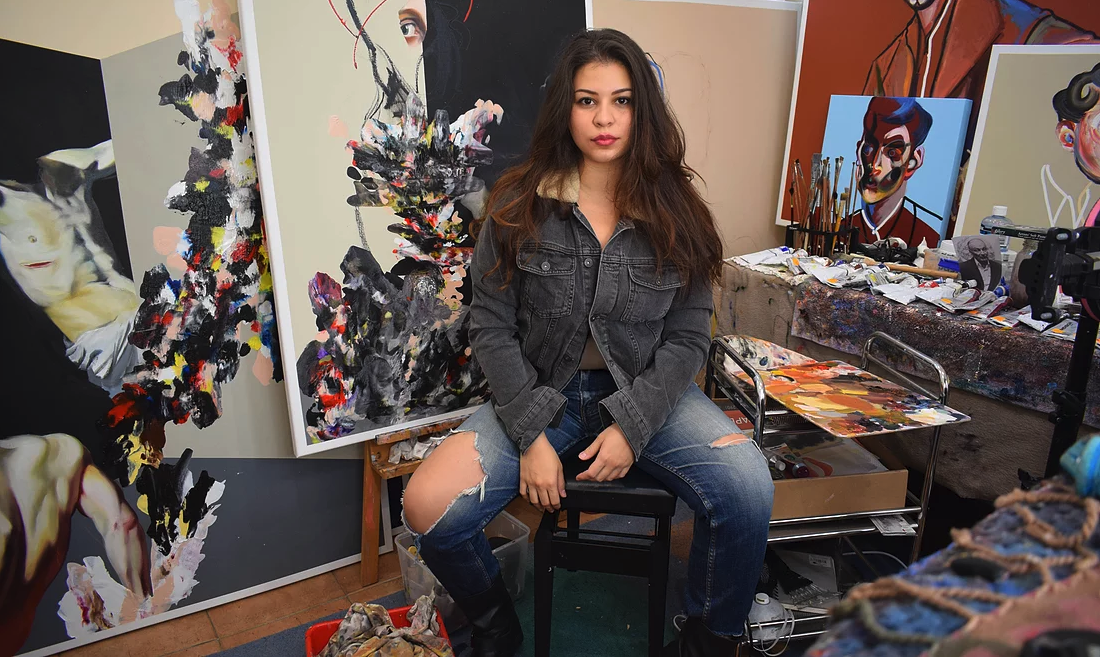 ‘It’s definitely great to have been selected again this year’: Loribelle returns to the Archibald with her most long-awaited portrait to date.

Loribelle’s plan to create this year’s entry, Meg and Amos (and Art), has been in the pipeline for five years, after seeing singer-songwriter Megan Washington live. Here, Megan sits with her baby Amos and dog Art; the love and connection between these subjects was what Loribelle found most endearing. “When Meg started singing to Amos, a totally improvised ‘baby commentary’ on what was happening, I felt I was witness to an incredible moment of intimacy and depth that absolutely had to be captured in a painting.’ 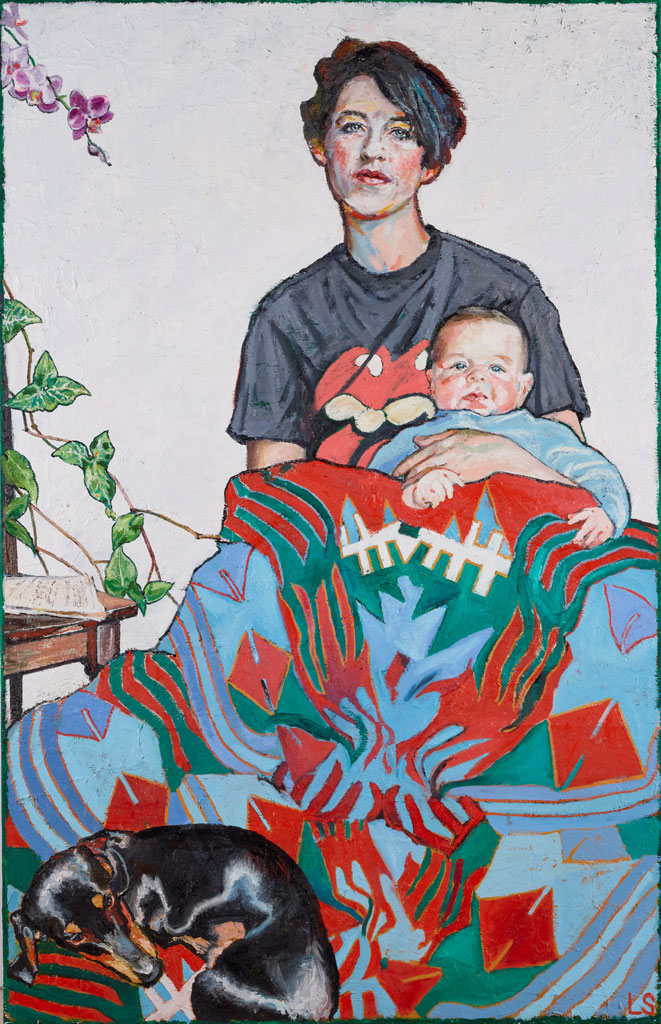 “I feel so grateful to have been able to paint Megan who I have wanted to do a portrait of for the past five years. It’s particularly special that I was able to also include her baby as this is such a momentous stage in her life.”

The fluidity and complexity of identity, exploration of social constructions and approaching traditionally male-dominated techniques in art are all common themes within Kim’s portraits. It’s her distinctive work portraying such important, topical concepts that has over the years made her one of the most celebrated artists in the queer community. Kim is known not only for her powerful portrait of a woman of colour; she herself is regarded as a ‘colourful woman of substance’

This year, Kim Leutwyler returns to the Archibald Prize with a portrait of Faustina Agolley, a Ghanaian-Chinese, openly queer actor, television producer, writer, DJ, and broadcaster. “I was instantly drawn to Faustina because of her strength in convictions balanced with profound positivity, as well as her insatiable appetite for knowledge and self development,” Kim says. “She openly shares her journey navigating through mental health, queerness, creative pursuits and intersectional feminism. She was kind enough to agree to a sitting, and we became fast friends through the creative process.” 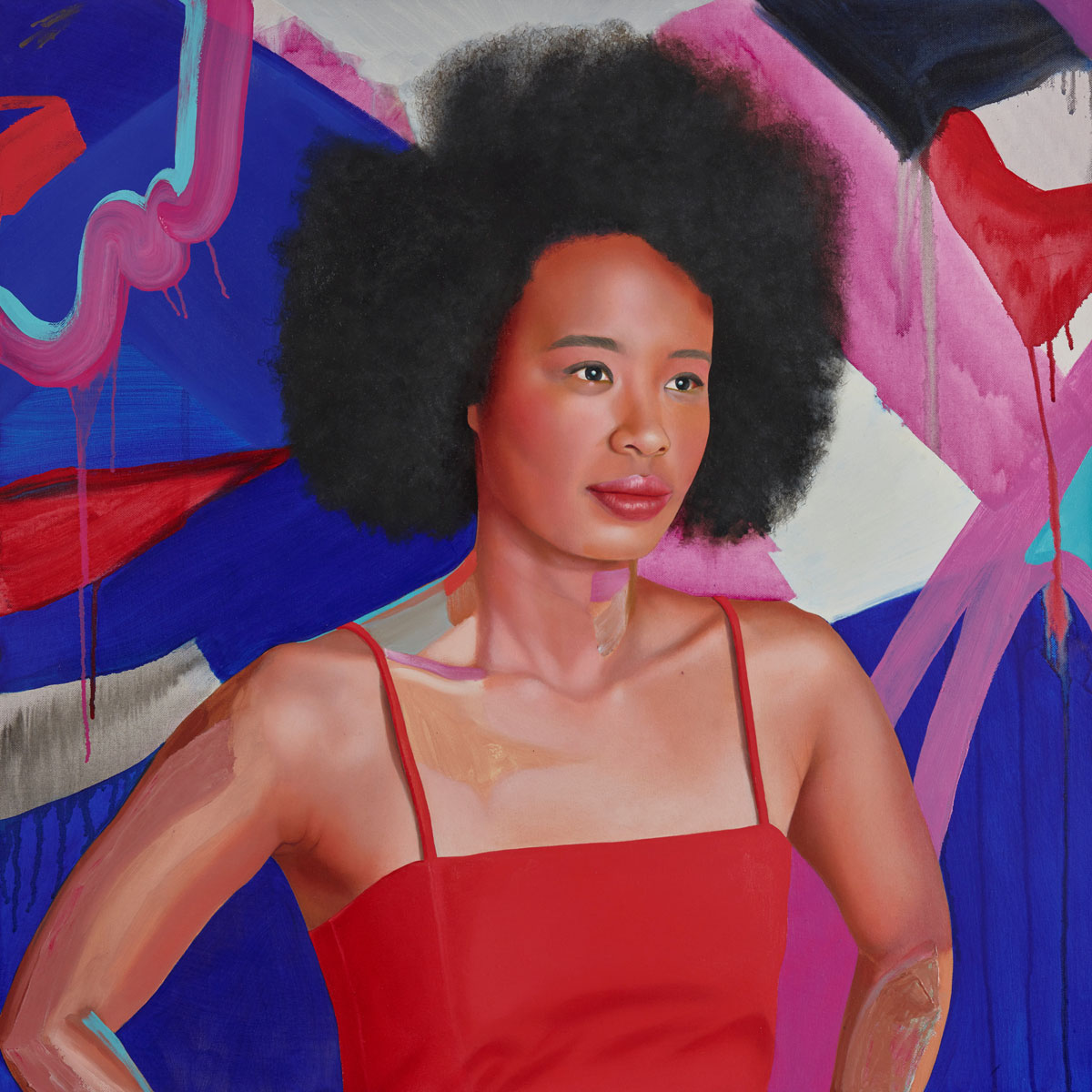 Faustina The Fuzz began as a preliminary sketch in September 2018 and took Kim Leutwyler four months to finish the piece we see today!

Kim’s ambitions for the piece run deeply into a vision of a future society for women and women of colour. “Women of colour have often been reduced to anonymous tropes in art historical representation, as opposed to the individuals they are/were. A majority of art history has left out queer women altogether. Representation of a fabulous queer woman of colour on the walls of our cultural institutions matters. My hope is that Faustina’s portrait will spark dialogue and action to raise the profile of women of colour in the Arts by amplifying voices and diversifying representation.”

Get to know the divine feminine in Kim’s work here.

We wish the very best of luck to our five Archibald finalists on Bluethumb! Watch out for the announcement of the winner of “the art prize that stops a nation” on Friday, 10 May 2019. Why not browse our curation of artworks from these Archibald finalists, or have a look at our previous Archibald Prize finalists?

Collecting Fine Art Photography: Why, How and What to Look for