After a successful campaign on Pozible, 10 Canberra-based female artists held a pop-up exhibition in late July at Stirato Gallery. The group show, called Field of Vision, ran from the 25th to the 28th. This was the second successful crowdfunding campaign for Bluethumb artists this year.

Kylie Fogarty, one of the artists involved, said “a lot of the artists in the group hadn’t had experience in working with crowdfunding before, so it was a new experience. We managed to raise the funds, however, most of the artists felt bashful about spreading the word about the campaign. It was great to connect with art enthusiasts who wanted to support the arts and lend a helping hand”. The pop up was a massive success!

The gallery space uniquely sits atop a bakery in the suburb of Fyshwick, with a striking yellow exterior drawing attention to the venue. With so many artists involved, each wall of the gallery space was covered by colourful paintings. 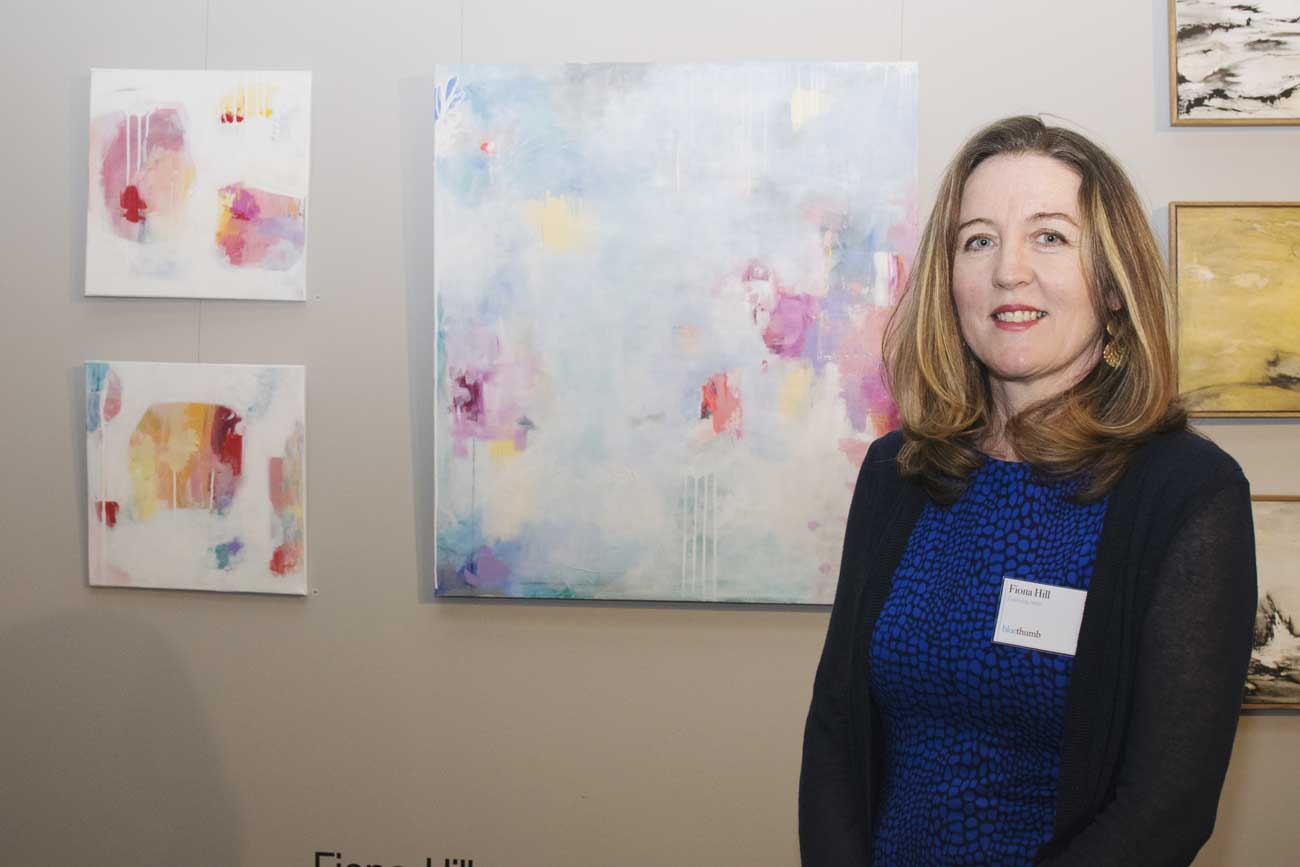 Fiona Hill with her artworks on opening night.

The artists involved were Jennifer Baird, Amy Basnett, Valentyna Crane, Colleen Michelle Connors, Margy Duke, Kylie Fogarty, Margaret Hadfield, Fiona Hill, Carole Osmotherly and Susan Trudinger. Together they showcased a variety of styles and genres, giving collectors a buffet of visual treats. Kylie says, “most of the group hadn’t met before the Pop Up. We have now  found a great supportive network of local artists that we plan to keep in touch with to support each other through doing forward”. The crowdfunding model allows artists to take complete control of how their work is shown. Each exhibition is artist-run, where artists shoulder the responsibility of raising funds, curating and hanging the pieces. Bluethumb begins each campaign by pledging $1000 towards the show, provided the artists can match this amount through fundraising. This amounts to a total budget for each show of $2000. The initiative is part of Bluethumb’s ongoing mission to empower Australian artists to succeed by connecting artists with collectors. Every wall was covered with artworks!

Contributors selected rewards based on the amount donated. The rewards on offer ranged from a coffee at the cafe for a $5 donation, to original paintings for $150. Each artist had something fun for their fans to enjoy.

“We had a fantastic turnout for opening night, which considering the opening was held in the middle of winter, midweek in Canberra, was a wonderful response.” Kylie Fogarty said sales continued to trickle in after the opening night. The exhibition proved so popular over the four days that Stirato Gallery extended it’s duration. The works are still showing from Monday-Saturday 8:30-4pm. It was a busy night and space was hard to come by!

Some of the artworks are still available. Click here to see the full curation from the exhibition.

All photos by Akka Ballenger.