News and Media, Galleries and Exhibitions, Awards, Festivals and Events

The Bluethumb Art Prize 18 is officially done and dusted, and what a whirlwind it’s been! Before we start to look ahead to next year’s prize, we wanted to stop, take a breath and reflect on the journey that has been.

As you might be able to guess, the planning for the art prize begins many months before we open entries. We learned a lot from our inaugural art prize last year, and wanted to use those lessons to grow and improve this time around. The show was packed on opening night.

When we finally did call for entries to the prize, we were thrilled at the huge enthusiasm from the artistic community – a mammoth number of 2,346 entered the prize, smashing last year’s record. Some of the entries came from artists already on Bluethumb, while many others came from fresh signups to the site.

This year, we opened our art prize up to not just works on canvas and works on paper, but photography and other media too. These categories were each recognised with their own separate category awards, meaning that all artists had more chance of taking home a prize. This piece, Hunting for Honey by Laurie Marburduk, was impressive both technically and for its sheer scale!

Another improvement from last year was the high number of entries that we received from Indigenous artists working through remote Indigenous art centres. We’re constantly partnering with new art centres and working to make the website more viable for them, so it was fantastic to see these efforts reflected in the list of entries. Within half an hour, opening night was so packed it was hard to get through!

The diversity of the initial list of entries happily carried through to both the semi-finalists and the finalists; 60% of finalists were female and 18% Indigenous, and in the end, all of the prizes were won by women, one of whom, Ilawanti Ungkutjuru Ken, is an Indigenous artist and member of the Tjanpi Desert Weavers.

Although the judging panel for the 2018 Bluethumb Art Prize has changed significantly since last year, we were very thankful to welcome back Larakkia Elder June Mills, TV personality and qualified art curator Gina Liano and General Manager of SALA, Penny Griggs, as familiar faces from last year’s panel. Each of our judges brought something different to the table, and we’d like to extend a huge thank you to each and every one for their generosity of time and excellent artistic insight.

Another key change this year was the presence of the prize on the Bluethumb website. Not only did we implement a fair and easy-to-use voting system for the People’s Choice award, but we also centralised all the art prizes that have been hosted through Bluethumb into one section of the website. Given that this number is quickly increasing, this centralised platform makes it easy to keep a record of all our fantastic partnerships and events going forward.

As you can see from this blog post, we were thrilled to receive a fair amount of attention in the lead-up to the big event. Several of our artists, such as Kim Leutwyler, Loribelle Spirovski and Kim Hyunji made excited posts about their finalist status, and encouraged their own large following to come along to the event, as did leading art publications Art Almanac and Beautiful Bizarre.

The Bluethumb Art Prize Exhibition opens tonight, 6pm at Bluethumb HQ (81 Sackville Street, Collingwood) offering the opportunity to view the finalists’ works and meet with the artists, judges and the @bluethumbart crew. Winners will be announced at 7.30pm. The #BluethumbArtPrize is an annual #artaward that aims to raise the profile of #Australianartists by supporting, recognising and celebrating their incredible talent and diversity. Image courtesy of Bluethumb.

We also snagged an exciting feature slot before opening night on Channel 10’s flagship breakfast show, Studio 10, who invited the whole of Australia along to the opening and showcased several finalist pieces!

There was also great coverage and many social shoutouts after the announcements were made on opening night. Art Almanac, Beautiful Bizarre, The Plus Ones and The Style Curator all wrote articles listing the prize winners with fantastic reviews of Bluethumb and the show. There were, of course, a few congratulatory posts around social media too. We were especially excited when judge Gina Liano posted a photo from opening night to her 110k Instagram followers.

As you can imagine, there was plenty to be done in the lead-up to opening night. Transport had to be organised for all of the finalist artworks, brochures had to be put together and in short we needed to make sure that we had everything in order for a seamless opening night. The whole team pulled together and by the time we opened our doors the space looked incredible. Bluethumb team members Freddy Grant, the lead on the Bluethumb Art Prize, and Vlona Mehmedi, this year’s curatorial intern, both played an integral part in setting up the show.

The turnout was fantastic, and within thirty minutes it was difficult to get through the crowds! Finally, Bluethumb’s co-founder Ed and judge Gina Liano announced the winners. Kim Hyunji took home the overall Bluethumb Art Prize, for her piece Painless (Luke), which had also won the category Works on Canvas Award. Erin Nicholls won the Works on Paper Award with her work Smoke, Ilawanti Ungkutjuru Ken won the Other Media Award for her piece Patupiri Wiltja and Alice Blanch won the Photography Award for A Shifting Stillness #4. 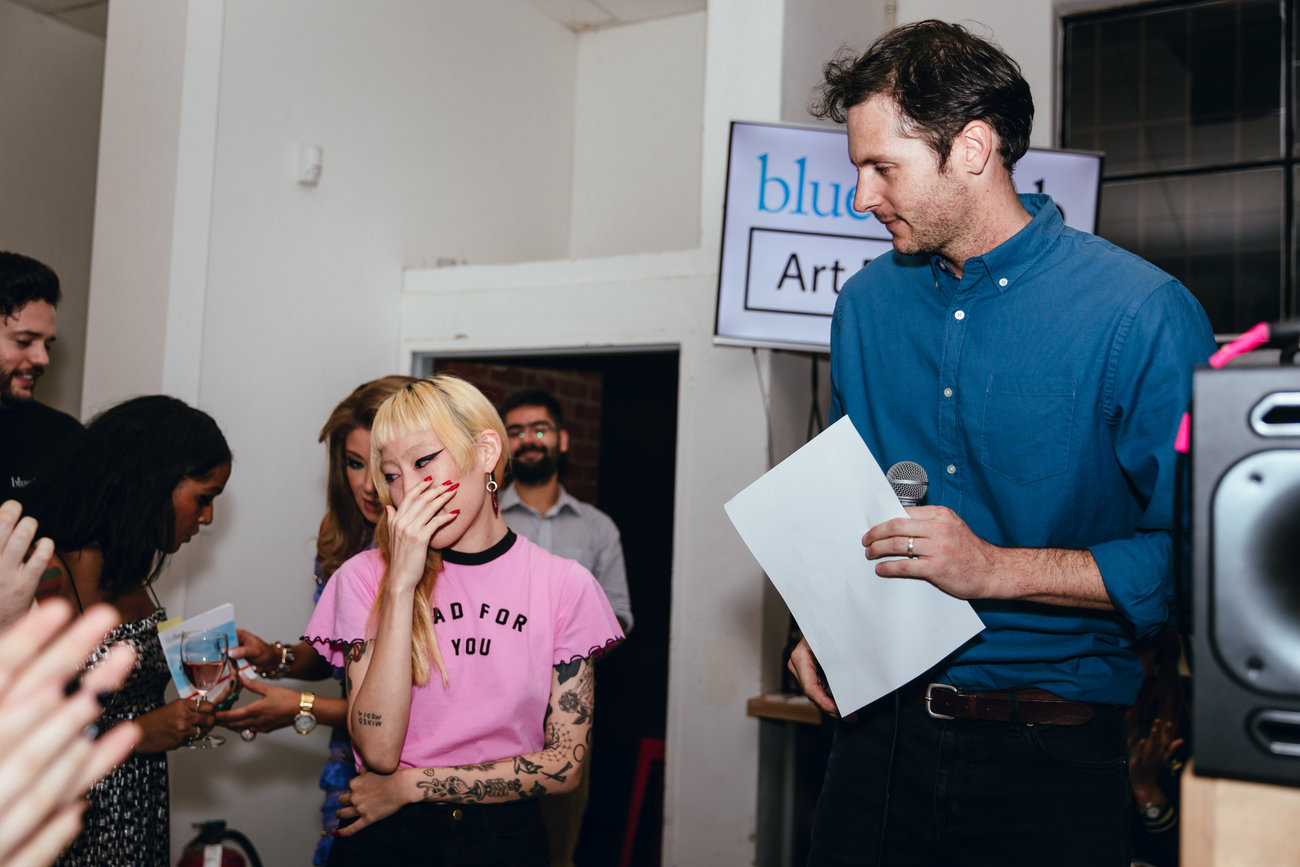 Bluethumb co-founder Ed handing over the Works on Canvas award to Kim Hyunji.

Each category winner received a cash prize of $2,000. Kim Hyunji not only took home an additional $10,000 for winning the overall prize, but also received the People’s Choice Award in a clean sweep, which we announced the following Tuesday after entries had closed.

Bluethumb Finalists in the 2018 Archibald and Sulman Prizes