Recently, we had the pleasure of working with the YWCA on the new Women’s Wing of their Song Hotel. The hotel is the only one in Australia run according to a profit-for-purpose model, with all profits directed to programs focussing on women’s empowerment and leadership, including the elimination of violence against women and children and the provision of safe harbour.

The new wing consists of nine unique rooms dedicated to inspiring Australian women. The women involved in the project were also invited to help with the design, and now, guests can stay in stunning suites devoted to Sia, Lee Lin Chin, Nakkiah Lui, Missy Higgins, Tina Arena, Bindi Irwin, Sally Rugg and Deborah Mailman. There is also a room entitled ‘We Paved the Way’, which celebrates the history of feminism in Australia. Our PR and Communications Manager Freddy with Sally Rugg, who headed up the Yes campaign, and Kim Leutwyler, who has painted Sally in the past and whose work Liv and Beck in Yellow and Salmon now hangs in her LGBTQIA/Pride-themed room at the hotel.

As the art sponsor for the project, Bluethumb was proud to supply the hotel with 25 artworks worth over $25,000 in total. We also helped with the PR, snagging features in The Guardian, Daily Mail and more.

The artworks were all chosen in collaboration with the stars. Based on their individual briefs, we curated a selection of stunning artworks by our large community of successful female artists. From here, it was easy for the women to go ahead and select their favourite pieces despite their busy schedules. A wide-angle shot of the Love is Love room, with Kim’s piece above the bed.

For The Sia Room, for example, which is music-themed, the team curated a selection of artworks that pay homage to Sia’s work and aesthetics. The final choice, Track Two, by Sherry McCourt, is not only created by a female artist but also features a female subject.

“The YWCA has been advocating for women’s rights since the late 1800s in Sydney,” says Bluethumb artist Sherry McCourt when we asked her why she was glad to get involved in the project. Track Two by Sherry McCourt. Now in the SIA room at Song Hotel.

“Although Track Two was originally composed to acknowledge the daily commute thousands of us have every day to get to work, perhaps the title could also reflect our aim to keep ourselves on track – to keep on reaching for our goals. We’re still having the same conversations about women in society and I’m very proud to be included in this small way with this wonderful project which celebrates Australian women’s success stories. We aren’t just reaching for the chandelier – we’re reaching beyond.” Sherry’s piece isn’t quite visible in this shot, but it’s easy to see how it fits the theme of the room! Pictured: Sophie Trower, Head of Advocacy and Development at the YWCA.

Bluethumb bestseller Sally Browne and two-time Archibald finalist Kim Leutwyler are amongst the other Bluethumb stars who have their work featured in the wing.

“The Women’s Wing is a new, proud chapter in our mission,” says Vanessa Beggs, CEO of the YWCA. “[It pays] homage to women whose talent, drive, individuality and collaboration with others to build a better community for all represent the values of the YWCA in the 21st century.” The Bad Bitch choir, who performed at the grand opening of the Wing. Can you see Vanessa Mae’s stunning piece Peninsula in the background?

Explaining the profit-for-purpose model, Ms Beggs says that “all profits made from Song Hotel are directed to programs that focus on women’s empowerment and leadership, eliminating violence against women and their children and providing safe harbour.”

“We’re so proud to be dedicating nine of our hotel rooms to inspirational Aussie women whose work aligns with our mission.” Bindi Erwin’s room was a crowd favourite – guests can even try on her uniform for themselves! This piece by Emma Wreyford, The Black Cockatoo in Abstract, adds a bright pop of colour while still keeping on-theme.

The design and fitout of each room has been made possible entirely through the in-kind donation of goods and services from a number of sponsors; alongside Bluethumb, Westpac and Lush were also key supporters. 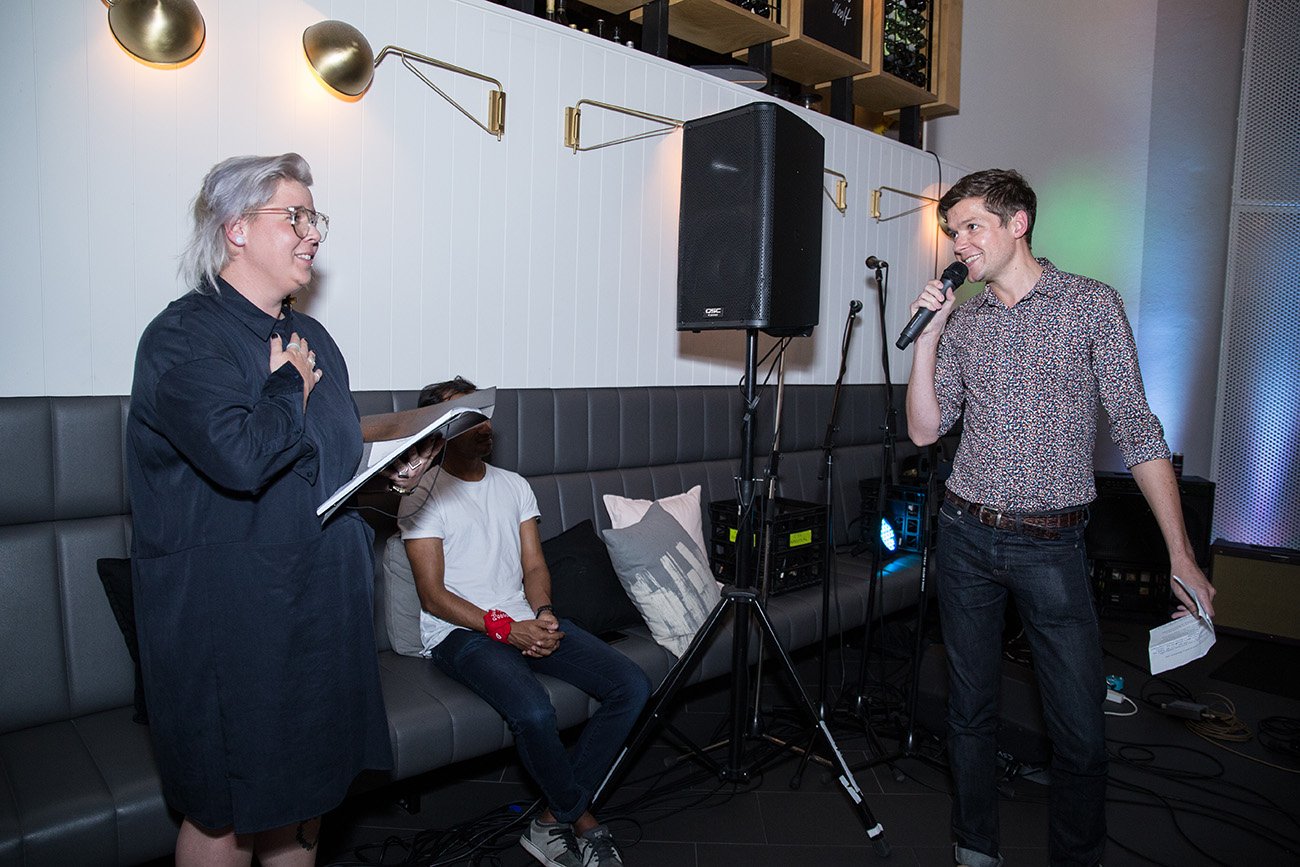 Bluethumb’s Freddy and Sophie from the YWCA worked closely together on this project and became great friends!

“Similarly to the YWCA, Bluethumb is built on collaboration and supporting people doing great things for their community,” says our cofounder and managing director, Edward Hartley. “Working together on this project was an amazing and fulfilling experience. Introducing emerging Australian female artists’ work to international stars like Sia and Bindi Irwin was not only a great day at work, but it’s also great to know that we’re giving them an exciting platform whilst helping to raise money for the important work the YWCA does.” Our art didn’t just appear in private hotel rooms – it also popped up in the foyer, hallways and dining areas. Shown here: Dawn in the Woods by Vanessa Mae and Black Cockatoos and Cymbidium Orchids by Sally Browne.

All of the artworks that Bluethumb has supplied are currently for sale in the hotel. Any guests wishing to purchase an artwork can simply scan the QR codes on its label and easily ‘add to cart’. A percentage of proceeds from each sale will go towards the incredible work that the YWCA does for women, children and the community at large. Each room has its own unique style, but all of them are warm and inviting! Shown here: Rehearsal by Tetyana Khytko.

Paul McKnight On The Importance Of Appreciating The Simple Things