Unsurprisingly, many of the artists on Bluethumb take inspiration from Australia’s stunning flora and fauna, using art as a means to share their love for nature and advocate for its conservation. Below, we’ve sought out 10 of the top emerging nature artists. Read on to learn more about their creative passion.

Drawing and creativity have always been an important part of life for Latvian-born artist Katerina Apale. After high school, Katerina went on to pursue both her artistic passions and a degree in pedagogy at university, studying in several different countries. Being no stranger to new places, in 2014 Katerina moved to Australia with her husband and her children. Here, “painting became my everyday practice, my source of energy, my dialogue with the world, my research of my own inner world and my meeting with the fairytale that is Australia, a unique and magical country that became a second home for me and my family. I’m very happy that people like my bright, positive artworks filled with light and energy!” Katerina in her studio.

Since signing up to Bluethumb in 2017, Karen Coull has been impressing the whole team with her intricate collage art. Karen’s pieces combine elements of nature with vintage fashion cutouts, creating an overall sense of sixties nostalgia and fantastical whimsy. Recently, Freddy Grant purchased four of Karen’s pieces for his new home in Footscray, beautifully complementing the mid-century modern style in the rest of his furniture. “I love how carefully Karen composes all the elements of her collage,” says Freddy. “It really feels like she’s telling a story.” Can you spot Karen’s pieces over on the left? Also on show, a photo by Megan George displayed on Freddy’s ‘Frame’ TV, and Lightning Man by Ross Yulidjirri.

No article about top nature artists would be complete without Miranda Lloyd – prolific in her work, Miranda paints trees, birds and a myriad of other scenes from nature, always in her signature modern, abstract style. According to Miranda, her enthusiasm for painting “comes from [my] own backyard, living in the foothills, wishing to bring the ‘Outside, Inside’.” As a surfer, Miranda also paints many scenes inspired by the sea and the surf. 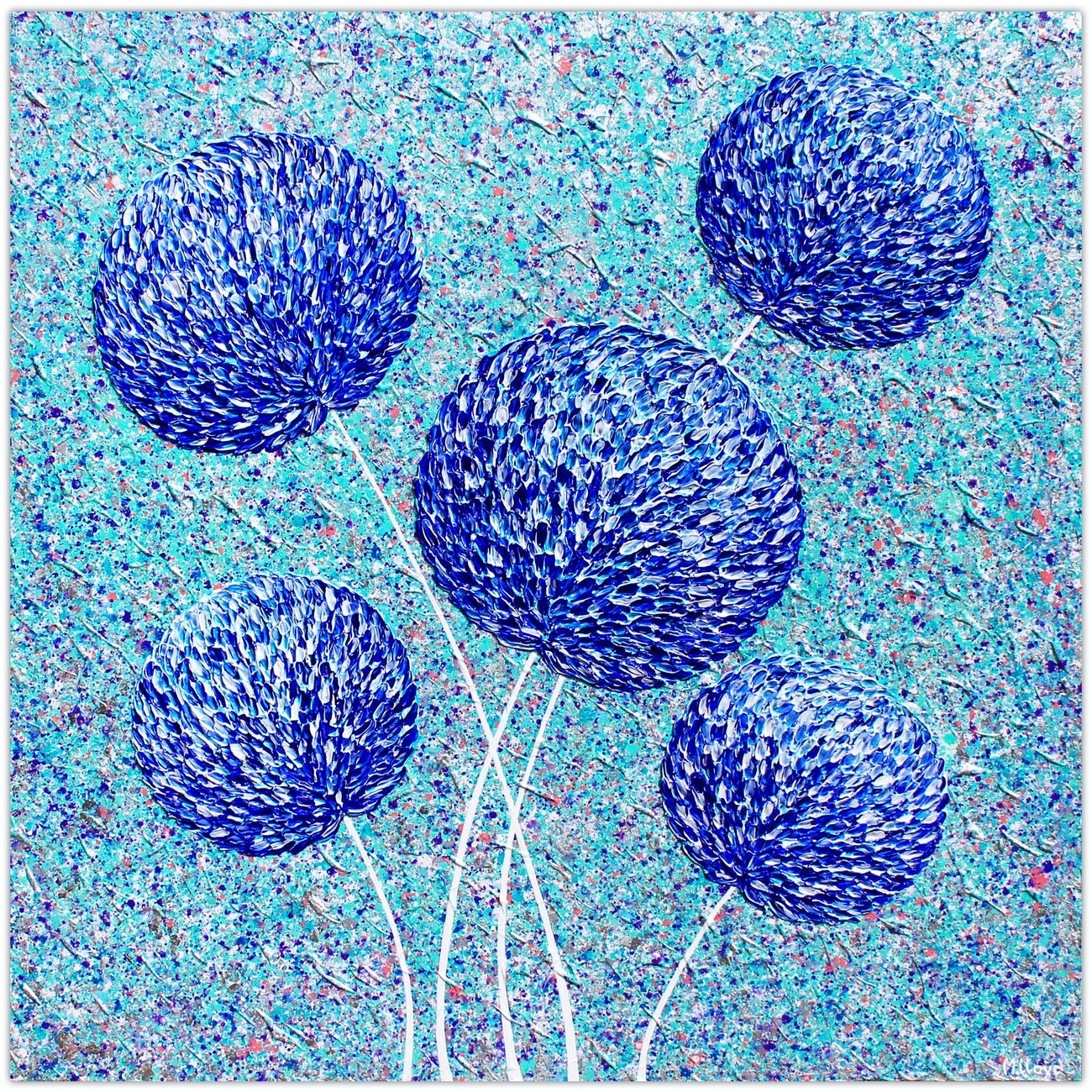 Miranda’s work always delivers on texture; these abstract flowers are a hot favourite with her collectors and we don’t expect them to stick around for long!

A Nature Artist in the City: Sally Browne

We love Sydney-based Sally Browne‘s artwork, and so do our collectors. Sally says her work “is informed by the wild nature that flourishes in the unkempt gardens and streets of my inner city neighbourhood. I explore colour and line to generate two dimensional narratives of my surroundings. Our flora and fauna here in Sydney is exotic and unique, and for the moment, still thriving in pockets amongst the hum of the big city backdrop.” Sally especially loves working with new and unusual colour palettes: “Colour is an intuitive and spontaneous part of my painting process; my colours are mixed and decided upon ‘on the fly’ and never really planned. I like the excitement and occasional disaster of working this way.”

Injalak Arts is a non-profit Aboriginal-owned enterprise which opened in Gunbalanya in 1989. As an arts centre, Injalak plays an important role in the life of the community, delivering positive social, economic and cultural outcomes for its members.

Many of Injalak’s artists paint in the traditional rrark hatching style that belongs to the Kunwinjku people of western Arnhem Land, or a more contemporary cross-hatching technique that has been adapted from ceremonial painting. Traditionally, they use a palette of white, red, yellow and black, which comes from the naturally occurring ochre in the region, and a fine piece of sedge grass shaved to just a few fibres. Much of the artwork produced at Injalak depicts the Mimih spirits, who are known for teaching the Aboriginal people bush survival skills, as well as ceremonies, dance and songs. However, they also typically depict the native animals of the area, such as kangaroos and echidnas, which play a big part in traditional life, created with stunning patterns on bark or paper. This piece, by Don Namundja, is entitled Ngalmangiyi (Long-Necked Turtle).

Click here to find out more about the wonderful work that goes on at an centre in our recent blog.

Johanna Hildebrandt is another artist who moved to Australia later in life, and was moved by its natural beauty to create art in response. Much of Johanna’s art depicts lush, deep greenery, as in a jungle or a rainforest, with a few recognisable characters such as birds or flowers peeking out from their habitat. For Liliana Gigovic, who comes from a very creative family, it was only natural for her to take an interest in art. She began paying more attention to her artistic career in 2014, and since then has had significant success selling her work on Bluethumb. “I am inspired by nature,” says Liliana, “whether it be seascape or flowers, to create something that is a little bit different with a modern outlook. I am an explorer by nature and I let my curious personality lead me to new journeys in art… I believe my paintings possess a zest for life and I hope my art gives others a glimpse of joy and happiness that they provide me.” 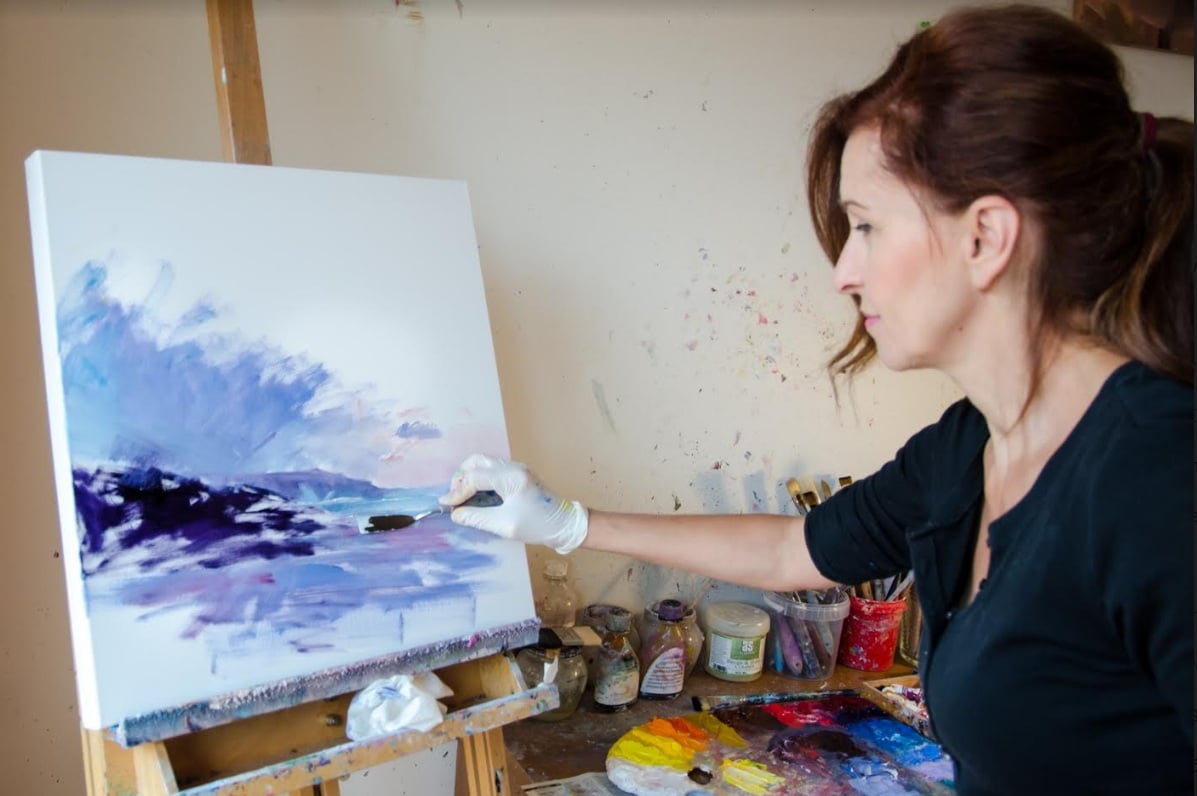 Liliana Gigovic getting stuck into a seascape!

Lyn Cooke is a passionate conservationist and, through her art, an advocate for nature. She aims to accurately depict the beauty of wildlife and influence viewers to become more aware, appreciative and respectful of the natural world. In Lyn’s own words, “nature provides limitless subject matter.” Luckily, Lyn shares her bushland home with a variety of fauna and flora, although she often ventures to other parts of Australia for several months at a time to seek more variety. Ultimately, the works of art that Lyn produces in response to these creatures captures their essence and vitality, as well as their mere physical appearance. Australian Rosellas is a watercolour piece that, as is usually with her work, has undergone a number of preliminary sketches. The detail of the painting is gradually built up using very fine brushwork, and many layers are required to achieve the desired result Aidan in his studio, which he says is “situated amongst the things he loves to paint”

Settled in the green of West Gippsland, Victoria, the fact that Aidan Weichard has become a renowned nature artist is unsurprising. Growing up, Aidan was encouraged to pursue creativity by his sculptor father. Drawing was his first love, but under the guidance of his high school art teacher he learnt to explored new mediums. Aidan is drawn to depicting animals, with all their unique personalities and quirks. Other favourite subject matter includes Australia’s native plants, such as the gum nut, as well as expansive landscapes. Aidan’s message through his creative process is simple: It is a “mindful reflection of this amazing place and the incredible things within it.” When Silver Met Gold symbolises ongoing enduring seasonal changes of the eucalyptus trees. The meeting of these two colours signifies this particular moment in time during the season

Over the past three decades, Paul Margocsy has won multiple highly established awards and has exhibited his work in shows worldwide. His indisputable talent as a nature artist has earned him a solid reputation as a collectable artist on Bluethumb. Known for his ability to capture subject matter with a photorealistic hand, Paul uses water based mediums and airbrushed backgrounds to achieve his artwork. Check out Bluethumb’s full list of collectable artists here, or take a look at our nature art for our full collection of art inspired by living the world.